Healthy Restaurant Eating: Is The Tide Turning In Fast Foods?

Eating out, and the amount we spend on it, especially on fast foods, has been rising steadily for decades, and parallels the increase in daily calorie intake that is contributing to the growing obesity crisis. But is that about to change? Official figures, which take years to emerge, don’t appear to show it, but some more recent findings suggest the tide could be starting to turn, although for surprising reasons.

This article looks at some trends in eating out, particularly in the fast food sector in the US, which seems poised for change, following the introduction of mandatory calorie labelling this year. Then, after drawing attention to some of the most fattening dishes on offer, and some healthier alternatives, it considers the evidence from one study on the effect of calorie labelling, and finally, gives some tips on how to make healthier eating out choices.

Eating Out Is On the Rise

According to reports from the US Department of Agriculture (USDA), the food-away-from-home sector comprised 16% of all eating occasions, and accounted for 19% of total calorie intake in in 1977-78. By 1995, these proportions had risen to 27% and 34% respectively. Similarly, the proportion of the US food dollar that is spent of away-from-home food has gone up from 40% in 1981 to 47% in 2001.

In the UK, the pattern is similar. Figures from the Office for National Statistics (ONS) show household spending on eating out has overtaken spending on meals at home. In 2004, UK households spent £85.8 billion on fresh and processed food and drinks, 53.4% more than they did in 1992. But over the same period, spending on food and drink consumed outside the home grew by 102.2%, to £87.5 billion.

And, despite the ongoing uncertainty about the economic climate, it seems this trend is set to continue. A recent survey of 3,000 UK consumers revealed that people are intending to increase by a slight amount (1.4%) the number of occasions they go out to eat and drink in the next six months.

This might not be so bad, some might say, except that when people eat out they tend to eat more, or higher calorie foods, or both, and away-from-home foods have also shown smaller nutritional improvements than foods at home. For an example of this, consider cheese. When cheese is purchased, it is more likely to be unprocessed if it is for home use. When we consume cheese in a restaurant or a fast food meal, it is more likely to be processed. Processing reduces the nutritional value of food: you get less beneficial nutrients for the same amount of calories.

More than half the cheese consumed in the US, where average consumption of cheese per head has nearly trebled in the last 50 years, now comes in “commercially manufactured and prepared foods (including food service), such as pizza, tacos, nachos, salad bars, fast-food sandwiches, bagel spreads, sauces for baked potatoes and other vegetables, and packaged snack foods,” says the USDA. 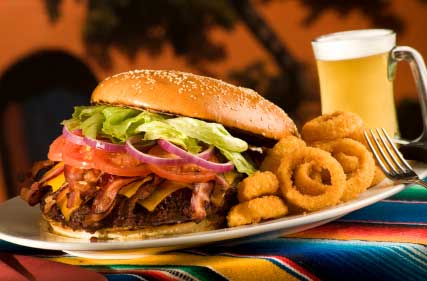 Every year since 2007, the nonprofit health advocacy Center for Science in the Public Interest (CSPI) in the US has identified the most fattening restaurant meals and given them “Xtreme Eating Awards”. Their latest awards took place last month, July 2011, and they said if these are an indication, then “the overfeeding of America seems likely to continue unabated at the nation’s chain restaurants”.

CSPI nutrition director Bonnie Liebman said “it’s as if the restaurants were targeting the remaining one out of three Americans who are still normal weight in order to boost their risk of obesity, diabetes, heart attacks, and cancer.”

Here are three of their seven Xtreme Eating Award “winners”:

Considering that most adults should consume no more than about 2,000 calories, 20 g of saturated fat, and 1,500 mg of sodium per day (the limit now recommended by the American Heart Association, AHA), you can see how some of these meals merit their Xtreme Eating Award.

Although “extreme meals” seem set to continue unabated, healthier options are available, even appearing on the same menus in the same outlets.

For example, in MacDonald’s, you could pass on the Big Breakfast with Hot Cakes (this has over 1,000 calories, 56 g of fat – 19 of which is saturated – so that’s your daily limit already, and 2,150 mg of sodium), and go instead for what medical and health news publisher WebMD suggests is a “better bet”, the Egg McMuffin, which comprises 300 calories, 12 g of fat (5g saturated) and 2 g of fiber, which with the protein should keep you satisfied for hours. However, keep an eye on the sodium, because this option has 820 mg.

In Burger King, instead of the Double Croissan’wich with Double Sausage with 700 calories, 49 g fat and 1,510 mg of sodium, which contains nearly a whole day’s allowance of total fat, saturated fat and cholesterol, you could opt instead for the Egg and Cheese Croissan’wich which has 320 calories, 16 g fat, and 7 g of saturated fat, and the 11 g of protein will help you feel full until lunch time. Again though, look out for the sodium, for this breakfast has 690 mg, nearly half of a day’s allowance.

In Burger King, you may also find other healthier options, such as a chicken baguette sandwich with just 350 calories and 5g fat.

Is Demand for Healthy Menu Options Growing – If So What Is Driving It?

It will be interesting to see whether American consumer demand for healthier options in fast food outlets will grow when calorie labelling comes into force nationwide later this year as part of the new health care legislation that President Obama signed in March.

Michael F. Jacobson, founder and head of CSPI, says perhaps it will herald a “new era of common sense” in chain restaurants, who will find themselves competing to offer consumers healthy options containing more vegetables, fruits, and whole grains. 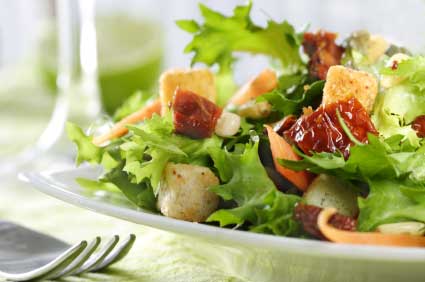 Judging from the growth and increasing sophistication of websites ready to tell you where to buy the healthiest restaurant meals, be it fast food or fine dining, from large chains to independents, there is a perception that consumer demand for healthier menu options and accurate nutrition information is growing. But is it that, or is it more a case of the industry preparing itself?

For example, HealthyDiningfinder.com dieticians help restauranters in the US review their menu and nutrition information to check if it meets their healthy eating criteria. They also give tips on how to lower calorie, fat and sodium content.

To try and answer the question of whether demand for healthy options is growing, many researchers and news writers turn to the example of New York City, where restaurants and coffee chains with 15 or more outlets nationwide have been required to show calorie counts on menus since July 2008.

The intention is that with good information about what is in their food, and greater awareness of the consequences of unhealthy eating, consumers will make healthier choices.

The most comprehensive study on the New York City experience to be done so far, published on 26 July 2011 in the British Medical Journal, found that average calories bought the year after were no different to average calories bought the year before labelling was brought in. And one in six fast food customers used calorie information and cut calories after the new scheme was brought into effect.

For the study, researchers from NYC’s Department of Health surveyed customers attending a cross-section of all fast-food chains in the city, and collected about 15,000 receipts. Their survey covered one year before (2007) and one year after (2009) the new labelling took effect.

However, while the study’s main findings may seem unremarkable, what is interesting is what happened inside the overall pattern of data, revealing some insights into what potentially drives consumer behavior.

Unlike the overall average, three major chains of the 11 studied (McDonald’s, Au Bon Pain, and KFC), accounting for 42% of the customers surveyed, showed “significant reductions” of between 40 and 80 calories in the average number of calories per person. The researchers pointed out that these were also the chains that most heavily promoted their low-calorie options.

And even more curious was what happened to Subway’s figures. Unlike the 1 in 6 average, nearly 1 in 4 of the chain’s customers said they used the calorie information on the menu to inform their choice, but, their average calories per purchase went up by 133 calories in the study. Could this have been because they also promoted their new “$5 foot-long” sandwich at the same time?

So perhaps what the BMJ study did, as an article in The Economist recently suggested, was show how big an effect restaurants themselves can have. Making calorie information mandatory by law doesn’t just change customer behavior, it also changes restaurant behavior, leading some to market their low-calorie foods more strongly than others, and this in turn changes customer behavior.

In the UK the situation is developing slightly differently, but with a similar effect. The government is pursuing a voluntary strategy, urging restaurants to put calorie and nutrition information on menus. Some of the big chains have already started doing this, and the Food Standards Agency (FSA) told the press recently that some of the UK’s largest companies have also made their menus healthier.

For example Pizza Hut has reduced the salt in its pizzas by 5% to comply with FSA guidelines, and Costa, the coffee chain, now offers lower fat sandwiches and muffins.

An area of major concern in our modern diet is the amount of sodium that we consume, predominantly as sodium chloride or salt that is added to food. Studies in the US and Europe show that most people consume above the safe daily limits of sodium. Reducing sodium intake can help lower blood pressure or prevent high blood pressure.

Experts have now concluded that getting people to reduce their sodium intake by reducing use of salt in home-prepared food has limited effect, because most of our dietary sodium comes from packaged and restaurant foods. We saw from CSPI’s Xtreme Eating Awards examples how a single meal in a chain restaurant can contain more than two days’ allowance of sodium.

There are other examples: a study by New York City Health Department researchers published last year found that the average sodium content in 6,500 meals bought in fast-food outlets was more than 1,750 mg, with 57% of the meals exceeding 1,500 mg.

The American Heart Association offers these tips for reducing sodium consumption when dining out: 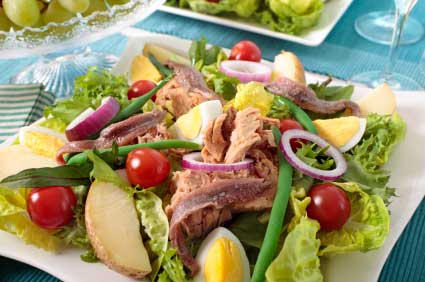 More Tips for Healthy Eating Out

Here are some more tips, based on information from the University of Wisconsin, on how to be kind to your waistline and your health when eating out, without spoiling the fun and enjoyment of good food.