Durezol And Durasal, Don't Get Them Mixed Up, FDA Warns

Eye drug Durezol (difluprednate ophthalmic emulsion) and wart remover Durasal (salicylic acid) may sound similar, but getting them mixed up can happen, and with potentially serious consequences, the Food and Drug Administration has warned doctors, pharmacists and other health care professionals. The Agency cites a case in which a pharmacist dispensed the wart-remover instead of eye drops to an eye-surgery patient, resulting in serious injury.

Durezol is prescribed for patients with inflammation linked to eye surgery.

The FDA informs that it has received several reports of Durezol and Durasal mix-ups. Fortunately, the mistakes were spotted before the patient received their prescriptions in most cases.

The FDA adds that health care professionals have complained about the names of the two drugs, saying they sound too similar, and worry about potential medical errors.

Pharmacists should be especially vigilant when filling Durezol prescriptions, the Agency adds. The risk of injury is much greater if an eye-surgery patient gets the wart remover, than the other way round. Even so, errors in either direction should be avoided. 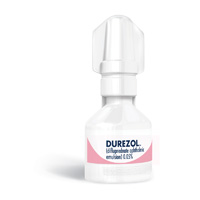 When drugs are submitted to the FDA for approval, the Agency carefully screens their proprietary names for similarities. However, Durasal (salicylic acid) is an OTC medication that did not undergo the approval process. That is why the two names exist side-by-side in the pharmacies.

Durasal came onto the market not long after the FDA approved Durezol.

The FDA has written to Elorac Inc. regarding removing Durasal from the market. Elorac has not responded, neither has it issued any kind of recall.

Pharmacists, doctors, other healthcare professionals and patients should check the drug’s packaging and label information carefully.

Any medications that appear to have a potential for confusion regarding their names should be reported to the . Patients and doctors should also report any side effects linked to Durezol or Durasal usage to MedWatch.