How To Get Fit With 3 Minutes Of Exercise A Week: BBC Doc Tries "HIT"

New research revealed on a BBC TV Horizon programme broadcast in February 2012, suggests it is possible to improve some measures of fitness with just 3 minutes of exercise a week. Medical journalist Dr Michael Mosley, like many people, is not a great fan of exercise for its own sake, and set out to find how little he would need to do to get fit. And he discovered some surprising facts about health benefits of HIT, or High Intensity Training.

“It goes against everything I was taught in medical school, and everything I have ever read since”, gasps Mosley to camera, as he completes a vigorous bout of pedalling on a stationary exercise bike while scientists look on.

Mosley, who trained as a medical doctor before moving into journalism and broadcasting, introduces the one-hour programme, “The Truth About Exercise”, by saying that what he discovered about exercise, thanks to the latest research, has challenged his view, and altered the way he lives his life.

A main theme of the TV programme is High Intensity Training (HIT), where you do a number of shorts bursts of intense and effortful exercise with short recovery breaks in between.

HIT is not new, but has come to prominence in recent years as more researchers have looked into and measured its health benefits.

There are various forms of HIT, depending on the intensity and duration of the effortful bursts, and your fitness goals.

(The HIT in this article is not to be confused with another type of workout also called HIT: a strength-training made popular in the 1970s by Arthur Jones, now practised by many bodybuilders, where you work with weights and perform sets of repetitions to the point of momentary muscle failure.)

Recent HIT research shows, for example, that doing ten one-minute sprints on a stationary exercise bike with about one minute of rest in between, three times a week, is as good for improving muscle as many hours of less strenuous conventional long-term biking.

In Gibala ‘s student study, the participants had to pedal at their maximum possible effort level on a specially adapted lab bike. The thinking then was that “all out” was an important part of the HIT method.

But then, in 2010, Gibala and colleagues published another study in The Journal of Physiology, where they showed how a less extreme form of HIT worked just as well for people whose doctors might be a bit worried about them adopting the “all out” method, for instance those who might be older, less fit and overweight.

In that form of HIT, the workout was still beyond the comfort zone of most people (about 95% of maximal heart rate), but was only half of what might be regarded as an “all out” sprint.

On the BBC programme, Mosley tries a form of HIT developed by Jamie Timmons, professor of ageing biology at Birmingham University in the UK. In Timmons’ form of HIT, the bursts of high intensity are at maximum effort, but of very short duration (20 seconds at a time).

Timmons told Mosley, who was doing no weekly exercise at the time, that he could expect to see improvements in a number of measures of health if he did just three minutes of HIT a week, for four weeks. 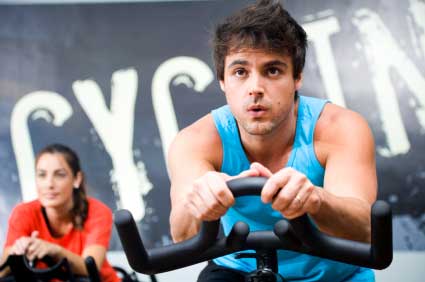 The HIT program he asked Mosley to follow was quite simple and can be done on a standard exercise bike:

And that’s it. Do this HIT program three times a week, and you have a total of 3 minutes a week of intensive pedalling, and about 6 minutes of gentle pedalling.

Mosley said he was somewhat sceptical, but he did as Timmons instructed: he followed this HIT program for four weeks, totalling 12 minutes of pedalling at “full throttle” and 36 minutes at a gentle pace.

Timmons had tested Mosley for a number of health indices before he started, and then, after his 4 weeks of HIT, Mosley went back to the lab to be re-tested.

A main test was for insulin sensitivity. Mosley was particularly keen to see this result as his father had been a diabetic and had died from complications linked to the disease.

When they measured Mosley’s insulin sensitivity before he started his HIT exercise regime, the result showed he was just inside what would be regarded as healthy tolerance.

Timmons told Mosley that research from a number of centres shows that doing 3 minutes HIT a week can improve insulin sensitivity by 24%. And this is exactly the amount by which Mosley’s own index improved.

But bigger improvements than this have also been recorded, albeit with a slightly different HIT regime.

A 2011 study by Gibala’s group at McMaster published in Medicine & Science in Sports & Exercise found a 35% improvement in insulin sensitivity after only two weeks.

Their sedentary volunteers (average age 45) had done no exercise for over a year, and only had to work at 60% peak power (80- 95% of heart rate reserve). Their biking regime was 10 times 60-second bursts of intense pedalling with 60 seconds of recovery time in between each, performed three times a week (the whole workout, including 3 minutes of warm-up and 5 minutes of cool -down, lasting less than half an hour).

Insulin sensitivity is important for keeping blood sugar or glucose stable. When you eat, your digestion starts putting glucose into your bloodstream. This causes the pancreas to release insulin, a hormone that triggers body tissue to absorb circulating glucose.

If your insulin sensitivity reduces, the pancreas has to release more and more insulin to keep blood glucose levels stable.

Abnormally low insulin sensitivity is known as insulin resistance, a condition that results in high levels of insulin, glucose and fats circulating in the bloodstream. It is a main risk factor for metabolic syndrome, which increases the risk for coronary artery disease, stroke, and type 2 diabetes.

It is not clear how HIT affects insulin sensitivity, but Timmons, and some other scientists that Mosley spoke to, suggest it could be because HIT uses many more muscles than conventional aerobic training.

HIT engages 80% of the muscles of the body, compared to up to 40% during moderate jogging or cycling. HIT engages not only leg muscles, but also the muscles in the upper body, such as the arms and shoulders.

One of the effects of exercise is to break down glycogen in muscles. Glycogen is a stored form of glucose. The theory is that removing stores of glycogen makes way for fresh glucose to be deposited from the bloodstream. So the more muscle tissue that come under this influence, the more space that is available for new glucose deposits.

There are some things that HIT will not necessarily do for you. For example, in Mosley’s case, it didn’t improve his aerobic fitness, the other main health index that Timmons and colleagues tested.

The scientists said the reason Mosley’s aerobic fitness did not improve after HIT was because of his genes. A genetic test, taken before he did the HIT, predicted that no matter how much exercise he did, his aerobic fitness was unlikely to improve to the same extent as someone whose genes resemble those of Olympic gold medallists.

The evidence that ties aerobic fitness to health shows that one of the best predictors of a healthy long life is the body’s ability to take in and use oxygen while we are exercising maximally. The more blood the heart pumps around the body, the more oxygen our muscles use and the lower our risk of disease and early death.

And that is why aerobic exercise is promoted as important to health. The UK government’s guidelines for instance, say people should do 150 minutes of moderate, or 75 minutes of vigorous, exercise every week. (While this is what the guidelines state, it appears that more than three quarters of Brits don’t attain this level).

Thus biking, brisk walking, swimming, running, endurance training, are all promoted as moderate to vigorous aerobic workouts that increase the body’s ability to take in and use oxygen, something the scientists measure as VO2 max: the maximum volume of oxygen used during exercise. The higher a person’s VO2 max, the more resilient they are to illness.

But new research is begining to show that perhaps this does not work for everyone.

In 2010 the Journal of Applied Physiology published a large study, led by Timmons, that showed although aerobic exercise can and does increase VO2 max, it varies, according to genetic make-up.

In a large sample of hudreds of people, all following the same supervised aerobic exercise regime several hours a week for months, there was a spectrum of results, ranging from some who experienced little or no increase in VO2 (the non-responders) to those who showed a huge benefit (the high-responders).

Timmons and the very large international group of researchers, concluded that in the case of the non-responders, it is unlikely that aerobic training results in lowering their risk of heart disease and other chronic illnesses.

They discovered they could predict, by looking at just 11 genes in a person’s genome, where they will fit on the spectrum of non- to high-responders. Apparently, around 15% of the population are non-responders, and around 20% are high-responders.

The Link Between Exercise and Health Is an Individual Thing

A group of experts is currently reviewing the UK government guidelines for exercise. On the BBC Horizon programme, Timmons, a member of the expert group, told Mosley the problem with the current guidelines is they don’t take into account the variation in individual response to exercise, so there is no guarantee that following such a regime will actually give you the right results.

Mosley said his experience of HIT, and what he learned about the research Timmons and colleagues were doing linking genes to exercise response, made him rethink a number of things about exercise: such as, the more you do, does not necessarily mean the more you benefit.

What we are learning is that the link between exercise and health is an individual thing. Methods like HIT are useful, because very quickly, without spending a lot of time and effort, you can find out what works for you, and what doesn’t, and fine-tune a program that you can fit more easily into your lifestyle.

A word of caution: as always, before you take up a new form exercise, if you have any medical conditions, please talk to your doctor about it first.

For instance, in the case of HIT, if your doctor thinks it is OK for you to try it, be sure to discuss whether the very high or moderate intensity form is more appropriate, and be clear about the benefits you may reasonably expect.