Athletes have a higher tolerance for pain compared to the rest of the adult population, researchers from the University of Heidelberg, Germany reported in the journal Pain. The authors added that stories that describe sports men and women “playing through the pain” are common and appear to be backed by science – athletes seem to experience pain differently from other people.

As background information, the researchers explain that previous studies on how athletes perceive pain have been inconsistent, and even contradictory sometimes. So, Jonas Tesarz, MD, and team carried out a meta-analysis of published research to determine whether sports people had a higher pain tolerance than normally-active people (non-athletes). They found that indeed they have.

Pain threshold, on the other hand, was no different between the two groups of people. Pain threshold refers to the minimum intensity at which a person perceives a stimulus as painful. Put simply, pain tolerance looks at how much pain you can bear, while pain threshold determines when you start to sense pain.

“Our analysis reveals that pain perception differs in athletes compared to normally active controls. Studies in athletes offer the opportunity for an evaluation of the physical and psychological effects of regular activity on pain perception, which might foster the development of effective types of exercise for relief in pain patients.”

The authors gathered data on fifteen studies that focused on experimentally induced pain to determine athletes’ threshold or tolerance, in all cases they were compared to normally active controls. A total of 331 normally active controls and 568 athletes were included. The studies were carried out in Canada, Australia, Europe and the United States. Male and female athletes and non-athletes were included. The studies covered various types of sports, including strength sports, game sports, and endurance sports.

Nine of the studies focused on pain threshold, and twelve on pain tolerance.

The investigators found that athletes consistently had a higher pain tolerance than other people. How much pain they could bear varied, and depended largely on what type of sport they were involved in. 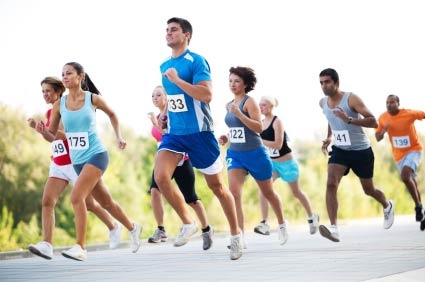 Athletes have a higher tolerance for pain than non-athletes

“Numerous studies of the effect of physical exercise in pain patients demonstrate a consistent impact on quality of life and functioning without an improvement in pain scores. It may be advisable in exercise treatment for pain patients to focus on the development of their pain-coping skills that would affect tolerance, rather than the direct alleviation of pain threshold.

“Further research is needed to clarify the exact relationship between physical activity and modifications in pain perception, and to identify the involved psychological factors and neurobiological processes. However, the observation that pain perception is modifiable by physical activity provides promise for the use of non-invasive methods with few side effects for patients with chronic pain conditions.”