Smoking has been banned by most major airlines for more than two decades, however nicotine addicts are still risking flight safety by sneaking a washroom smoke.

Talk to aircrew and they will tell you about these secret smokers. “We often catch them by smell, you develop a keen nose for a whiff of tobacco smoke,” British Airways Stewardess Anne, told me.

“The Russian and Japanese routes are the worst. It’s quite an event when the lavatory smoke alarms trigger, because the whole cabin can hear them,” she added.

To the addicted smoker, a furtive fag may temporarily dampen nicotine craving, but the consequences for the flight can be much more serious. In 2010 in the USA, F-16 fighter jets were scrambled after a passenger trying to sneak a smoke in an aircraft toilet sparked a massive security scare. Washroom smoking is thought to have caused at least one multi-fatality airliner crash and put other flights at risk. 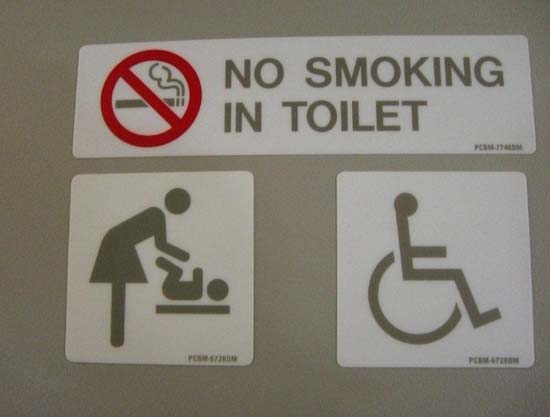 Now, EU health campaigners have decided to turn the in-flight ‘do not smoke’ period to health advantage.

Initially the cards will only appear on aircraft operated by the airline TAP Portugal, however, Paola Testori Coggi, the Commission’s Director-General for Health and Consumers says that other airlines will also start using the cards as the scheme rolls out.

The cards give smokers tips to support them during a smoke-free flight and then encourage them to become smoke free for life as part of the ‘Ex-Smokers are Unstoppable’ initiative (http://www.exsmokers.eu). Tips on the card include taking sips of water, deep breathing and other distraction techniques and setting a quit date. 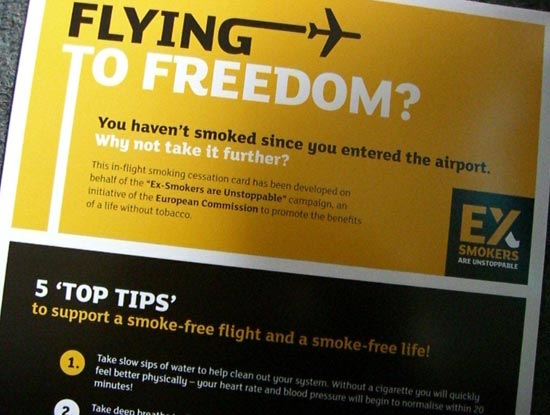 The launch comes on the back of an EU survey of more than 25,000 consumers which showed that over a third (40.7%) of those questioned felt that their smoking habit impacted on their flying, with 7.0% preferring to drive instead of fly and 6.8% saying they often felt the need to smoke when on board a plane.

The survey data, presented by Despina Spanou, Principal Advisor to the Commission’s Director-General for Health and Consumers, also showed that of those who said that smoking affected their flying, a fifth (19.7%) said they would only take short-haul flights as a result and 13.5% refused to fly altogether. By country, the Luxembourgers were most likely to feel that their smoking habit impacted on their flying (97.8%) followed by the Poles (66.7%) and Romanians (56.9%). The nation least likely to take a short flight was Slovakia (31% of those who said their habit affected their flying), whilst Poles were least likely to fly at all due to their habit (40.9%).

According to Professor Christina Gratziou, Chair of the European Respiratory Society (ERS) Tobacco Control Committee and Associate Professor of Pulmonary and Critical Care Medicine at Athens University, smoking contributes to five million deaths a year – 695,000 in the EU alone. “More than 78 million people in the EU want to quit smoking but many do not have the tools.” She added that the ERS supports the Commission’s in-flight initiative.