Is Exercise "Useless" In Treating Depression?

The publication of a new study in the BMJ on 6 June triggered a flurry of headlines suggesting that “exercise doesn’t help depression“. However, reducing the study’s specific, detailed findings to a media-friendly sound bite has run the risk of misleading people, because the researchers did not set out to test the effect of exercise on depression.

This article explains what the researchers did and what they found, while pointing out that some of the older established research in this area is coming under increasing scrutiny, and so perhaps there is a need for a new wave of rigorous, specific studies. In the meantime there are lots of experts who support the idea that exercise can help patients with depression, particularly if they have or are at high risk of developing other conditions such as obesity, cardiovascular disease or diabetes, which can often be the case.

What Did The Researchers Do?

The BMJ study researchers, from the Universities of Bristol, Exeter and the Peninsula College of Medicine and Dentistry, wanted to find out whether adding a specific physical activity intervention to the “usual care” that patients with depression receive through their general practitioners (GPs) in the UK, would significantly reduce their symptoms.

The intervention, called TREAD (TREAtment of Depression with physical activity), is based on theory, and provides a trained facilitator who gives “individually tailored support and encouragement to engage in physical activity”, write the researchers.

This kind of study helps healthcare providers make decisions about what services to offer through primary care.

The researchers wanted to test TREAD because while there is evidence to suggest exercise is beneficial for people with depression, it is mostly from small, less rigorous studies examining programmes the National Health Service (NHS) may not find practical to deliver.

TREAD is designed to “improve long term adherence to physical activity”, and a key feature is encouraging patients to select their own activities, depending on their individual needs and what they can readily do in their own environments. The patients receive up to three face to face meetings with the facilitator, who is trained in motivational interviewing techniques, and they can also have up to 10 telephone calls. 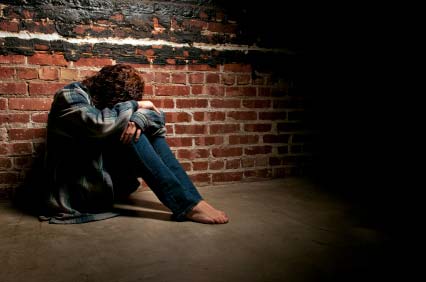 In the BMJ study the intervention lasted for up to 6 to 8 months, with most of the facilitator involvement being in the first four.

The trial followed the participants for 12 months, with measures taken at 4 months, 8 months, and 12 months. For depression symptoms the key measure was the Beck depression inventory, and participants were also asked about use of antidepressants.

The exercise data came from diaries the participants completed about their physical activity. A subset of participants also wore accelerometers, and this data confirmed that the diaries were sufficiently reliable and accurate.

“Usual care” meant that the participants in both groups were asked to follow the advice of their GP for their depression. So they were free during the trial to take up any of the treatment options usually available in primary care: this includes counselling, use of antidepressants, and “exercise on prescription”.

Thus, a distinguishing feature of this study is that all patients were free to take up prescribed exercise, but only some were encouraged to do so.

Another distinguising feature is that the study was not comparing the effectiveness of exercise encouragement with other forms of treatment such as counselling and medication, but as an adjunct to these.

The current government guidelines in the UK suggest adults should do 150 minutes of moderate or vigorous physical activity per week, so the researchers explain that:

“The aspiration was for the participants [in the TREAD group] to engage in moderate or vigorous activity for 150 minutes a week in bouts of at least 10 minutes, but if that seemed unrealistic then the facilitator encouraged any increase in physical activity, whatever the intensity.” 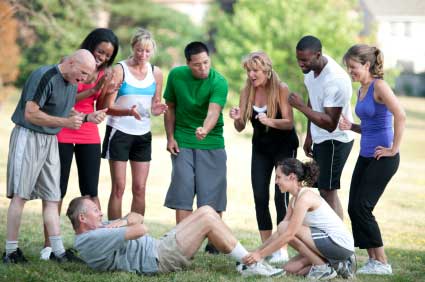 What Did They Find?

The results showed that the patients in the TREAD intervention group fared no better than those who only received the usual care.

For instance, there was “no evidence that participants offered the physical activity intervention reported improvement in mood by the four month follow-up point compared with those in the usual care group”.

And, “similarly, there was no evidence that the intervention group reported a change in mood by the eight and 12 month follow-up points”.

The results also showed no evidence of reduced antidepressant use in the TREAD group compared to the usual care only group.

In their conclusion, the authors write:

“The addition of a facilitated physical activity intervention to usual care did not improve depression outcome or reduce use of antidepressants compared with usual care alone.”

However, the researchers did find that the participants in the TREAD group reported more physical activity during the follow-up period, even months after they stopped having contact with the facilitator.

Thus the researchers did not conclude that exercise is “useless” for depression, as some of the headlines would suggest, but their findings could provide useful information for healthcare staff making decisions about which exercise programmes to include in primary care services.

“Numerous studies have reported the positive effects of physical activity for people suffering with depression but our intervention was not an effective strategy for reducing symptoms.”

“However, it is important to note that increased physical activity is beneficial for people with other medical conditions such as obesity, diabetes and cardiovascular disease and, of course, these conditions can affect people with depression.”

The researchers said they now plan to study whether TREAD has potential to treat conditions other than depression.

The government guidelines are set by the National Institute for Health and Clinical Excellence (NICE). These were last revised in 2009 and suggest patients with mild to moderate depression should be offered group-based physical activity programmes, with support from a competent facilitator, “guided by the person’s preference”. This should consist “typically of three sessions per week of moderate duration (45 minutes to 1 hour) over 10 to 14 weeks”.

It remains to be seen whether the BMJ study will lead to a change in these guidelines. One reason to suggest it will not, is summarized in a comment made in an NHS Choices article by Bazian, a group that analyzes the research evidence behind daily healthcare stories:

“This study assessed just one type of exercise intervention that involved facilitating greater activity levels. Therefore, this study does not tell us whether other types of support or exercise programme may have a positive effect on depression.”

They suggest the study may be useful to NHS staff who need to know which types of interventions might help patients with the condition.

However, there are also reasons to suggest the study may prompt some to question the guidelines, because they are based on older evidence that is now coming under increasing scrutiny.

For example, in 2009, a Cochrane review that updated an earlier widely-cited systematic review by others, concluded that the findings of the earlier review were statistically weak and did not support the idea that exercise is effective in the treatment of depression.

Other reviews have also suggested that more conclusive research is still needed into the use of exercise to treat depression, and such research should also look at the use of exercise as an adjunct to recognized treatments, and examine its ability to hold the gains in the longer term.

These points were raised in a Dutch paper published in BMC Public Health in January, that describes the design of a new study to examine the effect of running therapy on depression. The authors said by taking notice of the criticisms raised in these recent reviews, they see their trial as the “first well conducted add-on randomised controlled high-quality trial into the effect of aerobic exercise on depression”. 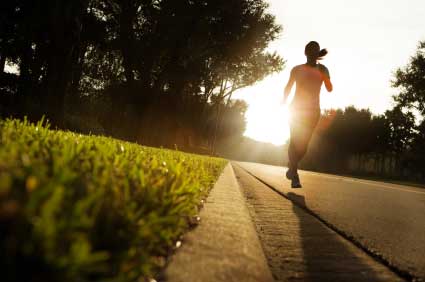 They also intend to measure the effect of aerobic exercise, which in this case comprises running therapy and nordic walking, on other diseases and conditions that often accompany depression, such as metabolic syndrome.

Exercise and other forms of physical activity are relatively cheap and non-harmful treatment options that don’t have the side effects of medication and do not require “the introspective ability necessary for most psychotherapies”, write the authors.

Perhaps their study and the recent BMJ study represent the start of a new wave of more rigorous, specific research into various aspects of exercise and depression, driven not only by the pressure to achieve value for money in public health, but also by the increasing demand from patients, doctors and researchers, who see that despite considerable development in treatment approaches, medication and psychotherapy are not ideal solutions.

And in the Meantime?

In the meantime, many authorities and experts are continuing to promote the idea that exercise has a beneficial role in treating depression.

For instance, in the United States, the Institute for Clinical Systems Improvement (ICSI), in its latest revised guideline for treating adults with major depression in primary care, states that “physical activity and active patient engagement are also useful in easing symptoms of major depression”.

In 2010, a Journal of Family Practice article “providing evidence-based answers from the Family Physicians Inquiries Network”, notes that “exercise alone reduces patient-perceived symptoms of depression as effectively as cognitive behavioral therapy or drugs”. The article goes on to say that mixed exercise and more of it get better results, and that meditative exercise also shows positive effect.

In the state of Victoria in Australia, the health authorities suggest that exercise not only eases depression by influencing brain chemicals like serotonin, but it can also help boost self-esteem because the person takes an active role in their own recovery. Being more physically active, for instance by taking part in team sports, can also have a positive effect on social life.

Other benefits include inducing a more relaxed state of mind, and also while exercising, people are unlikely to be thinking about what makes them depressed. These are in addition to proven physical benefits, such as improved cardiovascular fitness, helping to maintain healthy weight, and reductions in cholesterol and blood pressure. 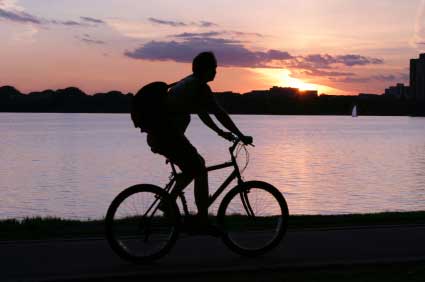 In the UK, the NHS Choices website says “exercise can help people recover from depression and prevent them from becoming depressed in the first place”. It says anyone with depression can benefit from exercising regularly, but it is “especially useful for people with mild depression”.

The site also suggests that engaging in exercise helps people with depression regain control of their bodies, which is a step towards gaining control of other aspects of their lives.

They urge patients to ask their GP about exercise on prescription. Depending on personal circumstances and what is available locally, it may be possible to get this for free, or at a reduced cost.

They recommend adults should do 150 minutes of moderate intensity activity every week, and they should start gradually if they haven’t exercised for a while. Even a 15-minute walk can make a difference by helping to clear the mind and inducing relaxation.

Another way to get started is to take part in team sports, go to classes at a sports centre or gym, or just be more active in daily life, such as walking or cycling instead of using the car.

“Anything that gets you off the couch and moving is exercise that can help improve your mood,” says the Mayo Clinic in the US.