He may not be Jacques Cousteau, but William Fenical from the Scripps Institution of Oceanography at UC San Diego is exploring the ocean in a whole new way.

According to a paper published in Angewandte Chemie, his team recently unearthed a new chemical compound from the sea that may become an effective treatment against the potentially deadly bacteria anthrax and MRSA.

The compound comes from a microorganism known as Streptomyces, which the team first collected off the coast of Santa Barbara, CA, in 2012. They named the unique compound anthracimycin, and they hope it can be developed into a new antibiotic drug.

Fenical worked together with a San Diego-based biopharmaceutical company to analyze anthracimycin with a technique known as spectroscopy. Their initial testing showed that the compound was potent in killing both anthrax (Bacillus anthracis) and MRSA (methicillin-resistant Staphylococcus aureus).

“The real importance of this work is the fact that anthracimycin has a new and unique chemical structure.

The discovery of truly new antibiotic compounds is quite rare. This discovery adds to many previous discoveries that show that marine bacteria are genetically and chemically unique.” 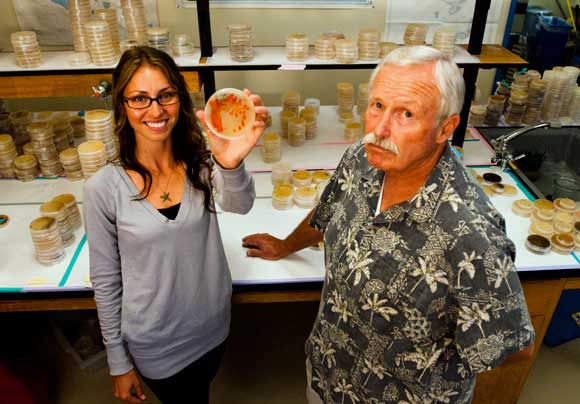 Looking to the ocean for solutions

The oceanography people at Scripps say the discovery of anthracimycin by William Fenical and his team adds to evidence that the oceans are a “vast resource for new materials that could one day treat a variety of diseases and illnesses.”

Fenical helped in the foundation of marine biomedicine as a field of study at Scripps, and he continues to bring attention to the benefits of exploring the ocean in the name of science.

“The last chemically-novel antibiotic was introduced in 1993. The vast majority of our antibiotics are derivatives of well-known chemical structures, many of which were discovered over 40 years ago.

To overcome the medical emergency we face with drug-resistant infectious diseases such as MRSA, we need to discover entirely new antibiotics. By new, I mean compounds with chemical formulations never seen before.

Anthracimycin is just such a discovery. It is composed of a chemical structure never seen or envisioned in the past.

Its potency against anthrax and MRSA suggests that this new structure type should be carefully explored by those industries that are developing antibiotics.”

Prevalence of MRSA infections in the US

Reducing MRSA infection in both hospitals and the community is a high priority for the Centers for Disease Control and Prevention (CDC) (resource no longer available at www.cdc.gov). The public health organization is running both short- and long-term infection-tracking projects in a bid to fully understand the burden of MRSA.

The CDC has, however, found that as a general trend, rates of MRSA infection are falling. The body says it is committed to identifying risk factors for MRSA infection through its Active Bacterial Core surveillance (ABCs) program.

In other recent news, it has been found that bacteria speak a “universal language” to build up resistance to antibiotics – another reason why medicine is constantly searching for new solutions in the fight against bacteria.