Could your 3D printer make you ill?

The researchers, who have published their work in the journal Atmospheric Environment, say inhaling a high amount of these particles has been associated with adverse health conditions, such as asthma and cardiorespiratory illnesses, and studies have linked elevated ultrafine particle (UFP) concentrations with increased hospital admissions for stroke.

For the study, the researchers measured the rates of UFPs emitted from desktop 3D printers inside a small enclosed 45 m3 office space. The UFP particles are small, nano-sized particles that are less than 100 nanometers in diameter.

Nine 3D printers were used to print small plastic figures over various time periods. The concentration measurements were used to estimate the UFP emission rates from the printers.

The researchers say that the rates the 3D printers emitted were similar to those emitted in other indoor activities such as using a gas or electric stove or burning scented candles.

“Regardless,” the researchers note, “the desktop 3D printers measured herein can all be classified as ‘high emitters’ with UFP emission rates greater than 1010 particles per minute,” according to criteria in a 2007 study analyzing particle emission characteristics of office printers.

The study points to previous research looking at toxic emissions from ABS processing, which has revealed toxic effects in mice and rats. But interestingly, PLA nanoparticles are known to be safe in humans and are widely used in drug treatments, the researchers say.

They conclude that the results suggest caution should be used when operating some commercially available 3D printers in unvented or inadequately filtered indoor environments, adding:

“More controlled experiments should be conducted to more fundamentally evaluate aerosol emissions from a wider arrange of desktop 3D printers and feedstocks.” 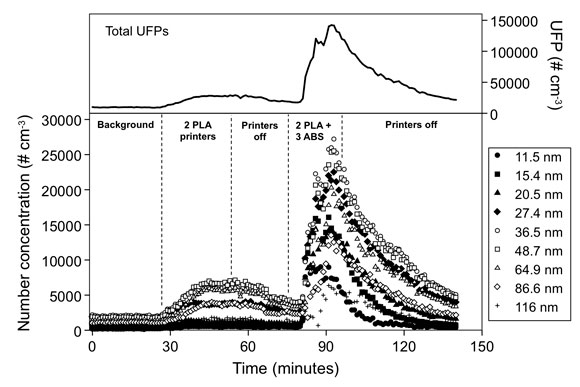 Size-resolved and total (
Written by Honor Whiteman on July 25, 2013