'Majority' of stroke patients might have undiagnosed attention disorders

The majority of stroke patients may have attention disorders, most of which are not diagnosed, according to a study published in the journal Neurology.

Researchers from Imperial College London in the UK analyzed 110 patients who were being treated for stroke at London’s Charing Cross Hospital, alongside 62 participants who had not suffered from stroke.

Five of the stroke patients had already been diagnosed with an attention disorder called “neglect” – a deficit of attention and awareness in one side of the body.

All of the participants were required to take part in an attention network test (ANT) so that the researchers could measure the patients’ alertness, orientation and executive control. The tests involved “computer game” style measurements.

During the tests, the participants’ performance in the brain was measured with MRI scans using a “voxel-lesion mapping approach.”

‘Over half of stroke patients have attention problems’

The results of the tests revealed that over 50% of the stroke patients had attention disorders that had not been diagnosed.

Dr. Paul Bentley of the department of medicine at Imperial College London says:

“We found that more than half of stroke patients have some form of attention problem, and these may be missed by routine bedside examinations.”

The researchers say that the type of attention disorder was dependent on what part of the brain the patient had suffered the stroke. For example, patients who had strokes that affected:

The study authors say that the methods in this study could easily be used to predict what type of attention disorder a stroke patient might have.

“Computer games similar to the one used here have been developed which can act as ‘brain training’ aids, and which can be tailor-made to each patient so as to rehabilitate them specifically for the deficit they show.

These findings therefore suggest a new strategy by which stroke treatments can be personalized depending on information gained from patients’ brain scans.”

Dr. Bentley adds that the researchers are also currently in the process of developing a “brain training” style application for the iPad. He adds:

The researchers note that the 3 types of attention disorders discovered in this study could also lead to tailored drug therapies for stroke patients. 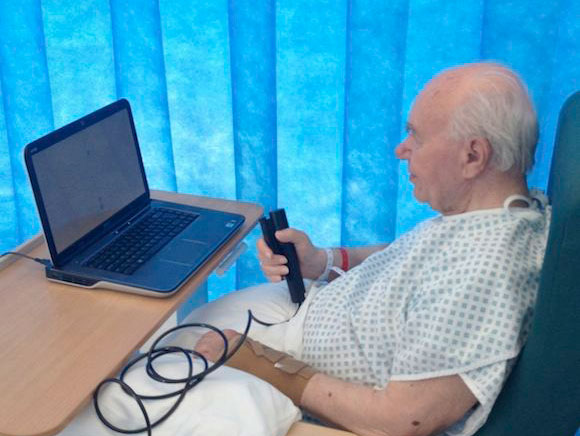 A patient involved in the study plays the “computer game” style test, which researchers say could help diagnose attention disorders in stroke patients.

“Since these 3 types of attention are controlled by different brain chemicals – dopamine, acetylcholine and adrenaline, these results indicate that patients could be treated with a medicine type appropriate to the brain part damaged.”

The researchers add that drugs designed to regulate the release of these chemicals are already available for other neurological disorders, and could therefore be explored for the treatment of attention disorders within stroke patients.