Written by Honor Whiteman on September 22, 2013

Scientists have created a novel smartphone “microscope” that can detect viruses and material less than one-thousandth of the width of a human hair, according to a study published in the journal ACS Nano.

Researchers from the University of California, Los Angeles (UCLA), created the portable smartphone attachment, which they say can be used to detect viruses and bacteria, eliminating the need for expensive or bulky microscopes and laboratory equipment.

The device, which weighs 186 g (less than half a pound) and is attached directly to the camera of a smartphone, is described as a “fluorescent microscope.” It was created using a 3D printer and contains a color filter, an external lens and a laser diode.

The attachment works by illuminating fluid or solid samples at an angle of approximately 75 degrees using the diode. By illuminating the samples at this angle, the researchers say it avoids detecting “scattered light” that could interfere with the fluorescent image.

When testing the device, the researchers were able to detect single human cytomegalovirus (HCMV) particles – a virus that can cause birth defects including deafness and brain damage.

The virus can also lead to increased risk of death in people who have undergone organ transplantation, are infected with the HIV virus or who have a weak immune system.

According to the researchers, a single HCMV particle measures approximately 150-300 nanometers, and the device detected the particles clearly. By comparison, a human hair measures around 100,000 nanometers.

In another experiment, the device was able to detect nanoparticles. These were marked fluorescent polystyrene beads created especially for the experiment that measured between 90-100 nanometers.

The researchers verified the smartphone device by comparing its effectiveness against a scanning electron microscope and a photon-counting confocal microscope. This confirmed their previous findings.

“This cellphone-based imaging platform could be used for specific and sensitive detection of sub-wavelength objects, including bacteria and viruses and therefore could enable the practice of nanotechnology and biomedical testing in field settings and even in remote and resource-limited environments.”

“These results also constitute the first time that single nanoparticles and viruses have been detected using a cellphone-based, field-portable imaging system.”

Medical News Today recently reported on another creation from the research team at UCLA – a portable smartphone device that can conduct kidney tests.

Researchers from the UK recently created a portable eye clinic in a smartphone, able to diagnose cataracts, check prescriptions for vision lenses and check the retina for signs of disease. 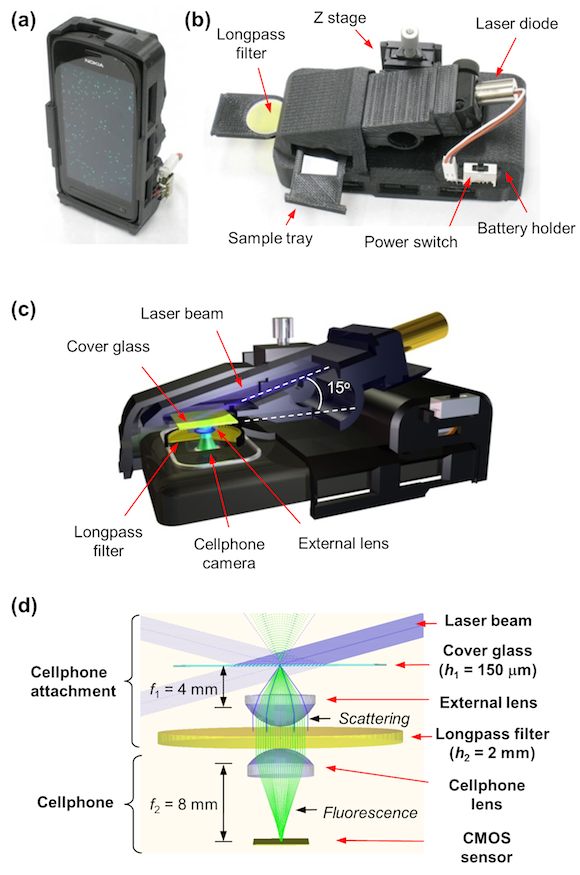 The smartphone ‘microscope’ attaches to the smartphone’s camera (a & b), weighing 186 g it can detect viruses and material less than one-thousandth the width of a human hair.
Image (c) shows a working diagram of the device.
Image (d) illustrates how the device works by illuminating fluid or solid samples using the diode at an angle of approximately 75 degrees, in order to avoid “scattered” light images.
Photo credit: UCLA
Written by Honor Whiteman on September 22, 2013