Medical professionals have long said that smoking may speed up the aging process. Now, new research has provided further evidence of this. A study has revealed that twins who smoke show more signs of premature facial aging compared with their identical twins who are non-smokers or smoked at least 5 years less.

Researchers from the Western Reserve University and University Hospitals of Cleveland, Ohio, say their findings may also give insight into the cellular-level mechanisms by which smoking may lead to premature aging.

To reach their findings, published in the journal Plastic and Reconstructive Surgery, the researchers recruited 79 pairs of identical twins who attended the Twins Day Festival in Twinsburg, Ohio. Of these pairs, 57 were women and the average age for all pairs was 48.

One twin within each pair smoked, while the other had smoked for at least 5 years less, or did not smoke at all. The average difference in smoking history between the twins who both smoked was 13 years.

All twins were required to have professional photographs taken in close-up of their face, as well as complete questionnaires regarding their medical history and lifestyle.

In order to determine specific areas of facial aging that may be affected by smoking, judges who are specialized in monitoring the signs of aging analyzed the twins’ facial features from the photographs without knowing details of their smoking history.

During this process, they analyzed the gradients of the twins’ wrinkles and other facial features that may be affected by aging, including the presence of bags under the eyes and lower eyelid skin discoloration. Each type of wrinkle and age-related feature was given a score for its severity.

‘Significant signs of aging’ found in lower part of face

Findings revealed that twins who smoked had significantly higher scores on the majority of the measures for facial aging. 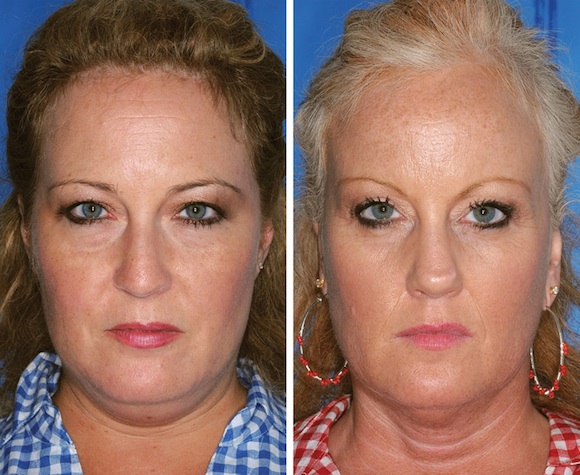 A study of identical twins showed the facial aging differences between smokers and non-smokers. The twin on the left is a non-smoker, while the twin on the right is a smoker.
Photo credit: The American Society of Plastic Surgeons

However, the study authors found that twins who smoked showed fewer differences in aging of the upper part of the face, including crow’s feet around the eyes and forehead lines.

The researchers hypothesize that aging in the upper part of the face may be caused by the changes in activity of facial muscles rather than the effect of smoking on the skin.

Among twins who had more than a 5-year difference in smoking history, the twin who smoked longer demonstrated higher scores for lower lip wrinkles and bags under the eyes and on the lower eyelids.

When the judges were asked to choose which twin they believed looked older from the photographs of the pairs in which one was a non-smoker, they chose the smoking twin 57% of the time. In twins who both smoked, the judges identified the twin who smoked for longer as appearing older 63.7% of the time.

The study authors note that although their findings demonstrate that smoking is a cause of facial aging, it is particularly interesting that twins who both smoked, but with one of a longer duration, showed significant differences in aging:

“To our knowledge, our article is the first of its kind to analyze faces of a large series of monozygotic twins with a difference in smoking histories.

This study details the specifics of facial aging brought on by smoking, which primarily affects the middle and lower thirds of the face. It also demonstrates that a 5-year difference in smoking history can cause noticeable differences in facial aging in twins.”

The researchers say that as well as showing how smoking can lead to premature facial aging, the study may also give clues as to how smoking causes aging at a cellular level, as the effects appear different for various facial features.

Medical News Today recently reported on a study suggesting that the aging process could be reversed with positive lifestyle changes, such as adopting a healthy diet and moderate exercise.