Written by Honor Whiteman on November 5, 2013

New research details how a sensor that can be implanted under the skin for over 1 year is able to monitor inflammation and detect nitric oxide – a molecule that has been found to show disturbed levels in the presence of some cancers. This is according to a study published in the journal Nature Nanotechnology.

Researchers from the Massachusetts Institute of Technology (MIT) say the sensors, made of carbon nanotubes, may also be modified to detect other molecules, such as glucose, which could help monitor diabetic patients.

According to the researchers, nitric oxide (NO) is a significant signaling molecule within living cells. It carries messages between the brain and immune system functions.

In some cancerous cells, levels of NO are disturbed. But the researchers note that mechanisms behind this have been unclear.

To gain a better understanding of this process, Prof. Michael Strano and postdoctoral fellow Nicole Iverson of MIT created nanotube sensors. They are 1-nanometer-thick cylinders that are hollow and made of carbon.

The researchers have previously created nanotube sensors for other molecules, such as hydrogen oxide. Carbon nanotubes have a natural fluorescence, the researchers explain. When molecules attach themselves to a certain target, the tube brightens or dims.

Other research from the team has demonstrated that carbon nanotubes have the ability to detect NO when the tubes are encased in DNA that has a certain sequence. But for this study, the researchers adapted the nanotubes to develop two separate sensors.

The first is a sensor that can be injected into the bloodstream, allowing short-term monitoring.

Iverson attached PEG (polyethylene glycol) to the sensor in order to make it injectable. PEG stops the particles clumping in the bloodstream.

The other sensor is embedded within a gel that can be implanted under the skin for a longer period of time. The gel is made from alginate – a molecule found in algae.

When the researchers implanted this sensor under the skin of mice, they found that it was functional for 400 days and stayed in place throughout, and they believe it may have the ability to last even longer.

The researchers note that an under-the-skin sensor could be useful in the monitoring of cancer or other diseases that cause inflammation. Furthermore, they say the sensor may be able to detect immune reactions in patients who have artificial hips or other implanted devices. 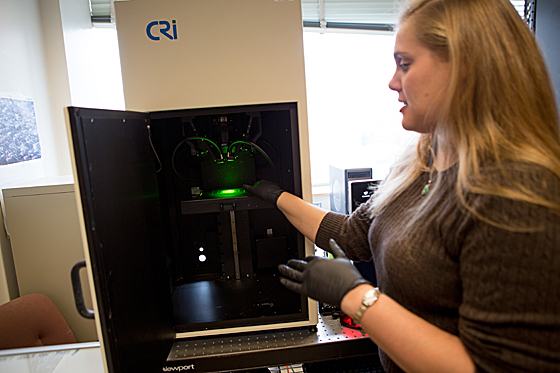 When both sensors are in the body, the researchers are able to produce a “near-infrared” fluorescent signal by shining a near-infrared laser on them. This information is then passed to an instrument that is able to determine the difference between the nanotubes and other areas that may give off fluorescence.

“Nitric oxide has contradictory roles in cancer progression and we need new tools in order to better understand it.

Our work provides a new tool for measuring this important molecule, and potentially others, in the body itself and in real time.”

The researchers say they are now looking to modify the sensors to detect glucose. They are doing this by encasing the nanotubes in different types of molecules.

The sensor would offer real-time glucose monitoring, the researchers say, and it would be connected to an insulin pump that could deliver insulin to the patient when needed.

If these sensors prove effective in glucose detection, the researchers say this could eliminate the need for diabetics to take blood samples – the current method for detecting glucose levels.

“The current thinking is that every part of the closed-loop system is in place except for an accurate and stable sensor,” says Prof. Strano. “There is considerable opportunity to improve upon devices that are now on the market so that a complete system can be realized.”