Written by Honor Whiteman on November 8, 2013

Neurosurgery is deemed one of the most complicated surgical techniques, and any tools that help train new neurosurgical apprentices are largely welcomed in the medical world. Now, a neurosurgeon has created a surgery simulator designed to teach basic surgery skills, and it is modeled on his daughter’s head.

The simulator, created by Richard Ashpole of the Queen’s Medical Centre in Nottingham, UK, is called the Realistic Operative Workstation for Educating Neurosurgical Apprentices, otherwise known as Rowena.

Rowena is coincidentally his 14-year-old daughter’s name, who Ashpole says was more than happy to help with his new creation – sitting still for 90 minutes while a mould was taken of her head.

Ashpole says he wanted the Rowena model to be as close to a real skull as possible, so it seemed logical to base the model on the head of a real person.

Rowena is made up of internal skull anatomy on a moulded plastic base. The model consists of a fixed replaceable upper cranium with scalp, bone and dural (a type of aluminum) layers. A realistic plastic brain is inside the skull.

How can Rowena be used?

Ashpole explains that a three-point headrest (skull clamp) can be used with Rowena in order to teach neurosurgeons anatomical positioning and landmarks. Raney scalp clips can also be used with the model, alongside burr hole and ICP (intracranial pressure monitoring) devices.

The model is able to withstand a variety of high-speed drills, as well as a hudson brace and a gigli saw and guide.

The dural layers – also complete with vascular markings – can be opened in different ways to expose the underlying brain. The model also allows bone flaps to be replaced and fixed with sutures (stitches) or a variety of screws and plates.

For a closure procedure, the dural layers can be sutured and the bone flaps can be replaced and fixed using any marketed fixation system. The scalp can also be stapled. 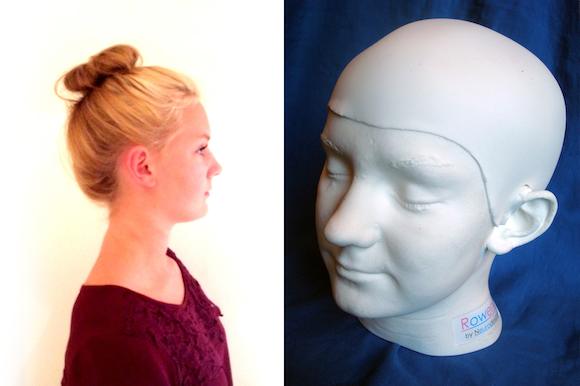 Fractures can also be reproduced with the model using a hammer, and fragments of the skull can be elevated and fixed.

Ashpole says the features of the Rowena model make it an affordable and comprehensive option for neurosurgical teaching departments:

“We want to offer teaching hospitals a reusable option for training surgeons which reduces costs but doesn’t compromise the quality of training.

Rowena has been developed over many months to ensure all layers of the cranium behave as realistically as possible. As a result, it offers a unique, cutting-edge teaching aid to train the next generation of neurosurgeons.”

The Rowena model is now being distributed by Delta Surgical, a UK-based company in Staffordshire. The company works with health care providers to create cost-effective solutions with the aim of improving hospital efficiency, patient care and safety within operating rooms.

Written by Honor Whiteman on November 8, 2013