Why men's noses are bigger than women's

It has long been hypothesized that compared with women, men naturally have bigger noses. Now, a new study from researchers at the University of Iowa confirms that this is true – stating than on average, men’s noses are 10% larger than women’s noses.

According to the investigators, who analyzed nose size in European populations, the size difference is a result of different body build between both sexes, alongside different energy demands.

They explain that in general, men have more lean muscle mass than women, which means they need more oxygen to encourage muscle growth and maintenance. They believe men have larger noses so they can inhale more oxygen, which is then transported to the blood before reaching the muscle.

To reach their findings, published in The American Journal of Physical Anthropology, the investigators analyzed the nose size and growth of 38 individuals of European descent who were a part of the Iowa Facial Growth Study. The participants were enrolled in the study from 3-years-old until their mid-20s.

Each participant had regular internal and external measurements of their nose taken throughout the study period.

The results of the study revealed that from birth until puberty, girls and boys generally have the same nose size. But from age 11 is when the size differences begin to occur, with the researchers finding an average 10% increased size in male nose size, compared with females. 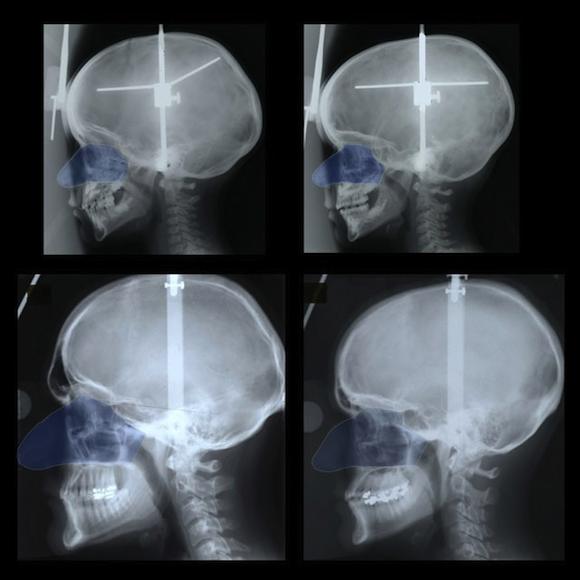 Investigators have found that on average, men’s noses (pictured at bottom) are 10% bigger than women’s noses (top), due to the need to inhale more oxygen to maintain their larger muscle mass.
Image credit: UI College of Dentistry

“Even if the body size is the same, males have larger noses, because more of the body is made up of that expensive tissue. And, it’s at puberty that these differences really take off,” explains Nathan Holton, assistant professor of the College of Dentistry at the University of Iowa and lead study author.

“This pattern mirrors what we see in energetically variables such as oxygen consumption, caloric intake and metabolic rates.”

“Moreover, this pattern is different from what we see when look at overall facial size. For a given body size, males show a disproportionately larger face as early as 3 years of age, perhaps earlier.

This suggests that while there is an association between overall facial size and nasal size – which we know from our previous work – there is a component of nasal size that may be influenced by body mass and oxygen requirements.”

Smaller noses than our ancestors

The investigators say their findings also explain why humans today have smaller noses than our ancestors, such as the Neanderthals.

They explain that distant relatives possessed more muscle mass and therefore required bigger noses in order to maintain that muscle. Because humans today have less muscle mass, there is no need for larger noses.

Holton adds that modern humans also have smaller rib cages and lungs than our ancestors, emphasizing the fact that we now do not require as much oxygen.

“So, in humans, the nose can become small, because our bodies have smaller oxygen requirements than we see in archaic humans. This all tells us physiologically how modern humans have changed from their ancestors,” Holton adds.

Although the study was conducted using participants of European descent, Holton points out that the findings should apply to other populations because differences in the male and female physiology are apparent across cultures and races.

However, Holton told Medical News Today that the present study was designed as a first step toward better understand the developmental patterns of nasal and body size, and the team’s next step is to work at establishing a direct link.

“This will include examining nasal size and variables, such as oxygen consumption, in study subjects so we can get a better handle on respiratory function and the size and shape of the nose,” he adds.

Earlier this year, Medical News Today reported on a study suggesting that men with wide faces trigger selfishness in others.