Written by Hannah Nichols on September 12, 2014

Scientists led by the Wellcome Trust Medical Research Council (MRC) Cambridge Stem Cell Institute at the University of Cambridge, UK, have discovered how to successfully “reset” human pluripotent stem cells to the earliest developmental state, equivalent to cells found in an embryo before it implants in the womb (7-9 days old) – a significant milestone in regenerative medicine.

Stem cells are unspecialized cells that can develop into cells with highly specialized functions. They can be classified according to their plasticity, or developmental versatility, and range from totipotent stem cells (the most versatile type) and pluripotent to multipotent (the least versatile).

Pluripotent stem cells have the potential to become almost any of the cell types of the body, including muscle, nerve, heart and blood. They can be produced in a lab from cells extracted from an early stage embryo or from adult cells that have been induced into a pluripotent state.

Research using human pluripotent stem cells may help generate cells and tissue for transplantation, improve understanding of human development and what causes birth defects and cancer, and change the way drugs are developed and tested for safety.

Previously, researchers have struggled to generate human pluripotent stem cells that are in a truly “blank state.” Instead, they have only been able to derive cells that have advanced slightly further down the developmental pathway and exhibit characteristics of differentiation into specific cell types.

The breakthrough, published in Cell, marks the starting point for further understanding of human development and may eventually lead to the production of safe and reproducible materials for a range of applications including cell therapies.

“Capturing embryonic stem cells is like stopping the developmental clock at the precise moment before they begin to turn into distinct cells and tissues.”

He adds, “Scientists have perfected a reliable way of doing this with mouse cells, but human cells have proved more difficult to arrest and show subtle differences between the individual cells. It’s as if the developmental clock has not stopped at the same time, and some cells are a few minutes ahead of others.”

Generating human stem cells in the lab is considerably more difficult to control compared with mouse cells. Mouse cells can be frozen in a state of naïve pluripotency by utilizing a LIF protein – a protein to which human cells are not as responsive. Instead, human cells have to be controlled using another method that involves switching key genes on and off.

Due to the complexity of this technique, scientists have previously been unable to generate human pluripotent stem cells that are as primitive or as consistent as mouse embryonic stem cells.

The researchers overcame the issue by introducing two genes for a short period – NANOG and KLF2 – instigating a “system reboot” to the network of genes controlling the cell and inducing the naïve pluripotent condition. The reset cells, as a result, act like any other stem cell and self-renew indefinitely to create large quantities of stable cells and can differentiate into cells types such as nerve and heart cells. 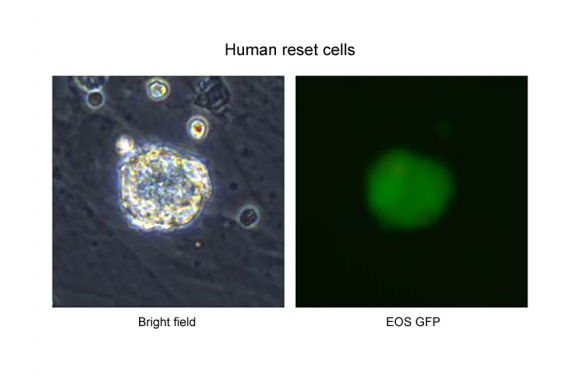 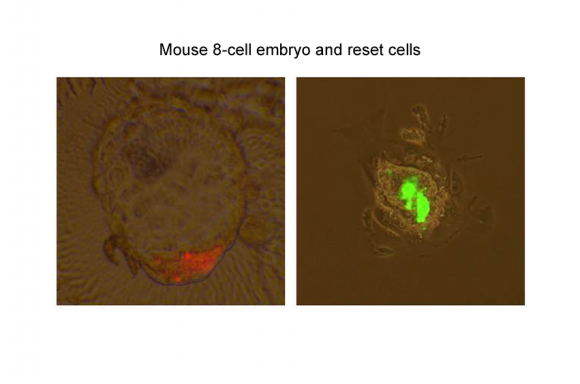 KLF4 and TFCP2L1 positive cells exist in the human inner cell mass. Expanded blastocysts (day 7) were fixed and immunostained (left). As similar as embryo, co-expression of KLF4, TFCP2L1 and NANOG can be seen in reset cells (right). 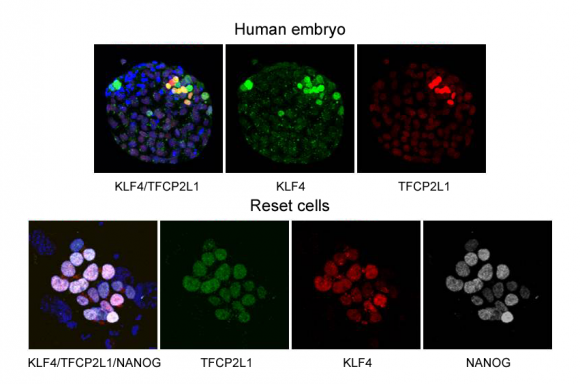 “Using human reset cells, we can study more about how normal embryo development progresses and also how it can go wrong, leading to miscarriage and developmental disorders. The naïve state of the reset cells may also make it easier and more reliable to grow and manipulate them in the laboratory and may allow them to serve as a blank canvas for creating specialized cells and tissues for use in regenerative medicine.”

Prof.Smith, director of the Wellcome Trust MRC Cambridge Stem Cell Institute, says: “Our findings suggest that it is possible to rewind the clock to achieve true ground state pluripotency in human cells. These cells may represent the real starting point for the formation of tissues in the human embryo. We hope that, in time, they will allow us to unlock the fundamental biology of early development, which is impossible to study directly in people.”

Takashima comments, “The generation of our reset cells is the culmination of many years of work into the underlying biology of stem cells by our lab.” He continues:

“Reset cells have opened the door to a new phase of research and we now need to carry out further studies to establish how our cells compare with others. We don’t yet know whether these will be a better starting point than existing stem cells for therapies, but being able to start entirely ‘from scratch’ could prove beneficial.”

Dr. Rob Buckle, head of Regenerative Medicine at the MRC, states how achieving a true ground state in human pluripotent stem cells is seen as a significant milestone in regenerative medicine. He explains, “With further refinement, this method for creating ‘blank’ pluripotent cells could provide a more reliable and renewable raw material for a range of cellular therapies, diagnostics and drug safety screening tools. This is likely to be a highly attractive prospect to industry and regulators.”

Medical News Today recently reported on a stem cell breakthrough for ‘Cinderella cells’ – specialized cells that go on to form the spinal cord, muscle and bone tissue in a growing embryo. They have been produced in the laboratory using stem cells for the first time.

Written by Hannah Nichols on September 12, 2014