Use the force: genes controlled by the power of human thought

Science fiction and medicine converge in a new study published in Nature Communications, which details how researchers have tapped into human brainwaves to transfer them wirelessly, controlling gene expression in mice. The team hopes their method could one day help combat neurological diseases.

The researchers, led by Prof. Martin Fussenegger of ETH Zurich in Switzerland, developed a new gene regulation method that allows thought-driven brainwaves to control gene expression – the conversion of genes into proteins.

Interestingly, their inspiration for the method came from a game called Mindflex, in which players wear special headsets with sensors on the forehead that record brainwaves. The electroencephalogram (EEG) readings are then transferred into the game environment, where they control a fan that guides a small ball through an obstacle course – all with the power of the mind.

Likewise, the new system from the researchers employs an EEG headset. Depending on the user’s thoughts, it can generate varying amounts of a molecule.

“For the first time, we have been able to tap into human brainwaves, transfer them wirelessly to a gene network and regulate the expression of a gene depending on the type of thought,” explains Prof. Fussenegger.

“Being able to control gene expression via the power of thought is a dream that we’ve been chasing for over a decade,” he adds.

How the method works

The concept of “the power of the mind” has been investigated in terms of meditation or psychology, but here is how the new high-tech system works to tap into the power of thought:

The user’s recorded brainwaves are analyzed and transferred wirelessly – via Bluetooth – to a controller that manages a field generator, which creates an electromagnetic field. This field then gives an implant an induction current. 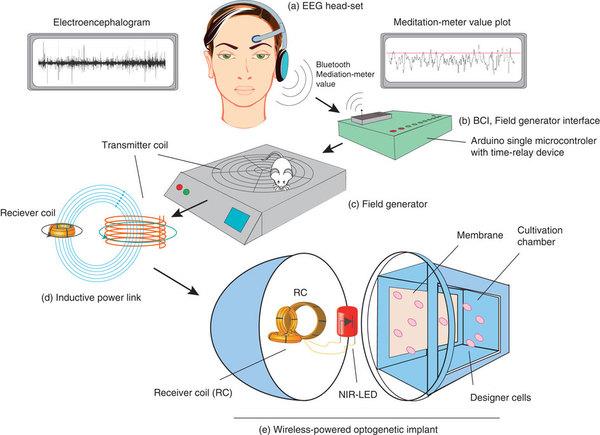 This image shows how the device takes thoughts, interprets them and transforms them into electricity to light up a near-infrared LED.
Image credit: Folcher M et al. Nature Communications 2014

In this latest study, the protein that the researchers used is called secreted alkaline phosphatase (SEAP). This is an easily detectible human model protein, the team explains. When the light shines on a modified light-sensitive protein within gene-modified cells, this triggers an “artificial signal cascade,” resulting in SEAP production.

The researchers say they used near-infrared light because it is not harmful to human cells, but it can still go deep into the tissue, enabling the implant function to be visually tracked.

In their study, the researchers note:

By combining cybernetics with optogenetics, we now provide the missing link enabling mental states such as biofeedback, concentration and meditation to directly control the transgene expression in living cells and mammals.”

To test the method, the researchers used the implant in cell cultures and mice, which were controlled by the thoughts of human test subjects.

And to control the amount of released protein, the researchers categorized the human subjects according to three states of mind: bio-feedback, meditation and concentration.

In the bio-feedback group, the human test subjects – who observed the LED light of the implant in the bodies of the mice – were able to consciously switch the LED light on or off from the visual feedback cues. In turn, this corresponded to the varying amounts of SEAP in the bloodstream of the mice.

Prof. Fussenegger describes controlling genes this way as “completely new and […] unique in its simplicity.” He and his team hope thought-controlled implants could one day help in neurological diseases, back pain and epilepsy by identifying brainwaves at an early stage and triggering and controlling agents in the implant.