How energy drinks affect your body within 24 hours

Last year, the World Health Organization hailed energy drinks a “danger to public health,” after they found consumption of such beverages is on the rise. Now, an infographic created by website Personalise.co.uk claims to show exactly what happens to the body in the 24 hours after consuming an energy drink.

Created using information from sources including the UK’s National Health Service (NHS), the US Food and Drug Administration (FDA) and energy drink manufacturer Red Bull, the infographic follows another that went viral earlier this month, revealing how Coca-Cola affects the body within 1 hour of drinking it.

This new infographic, however, details what an energy drink – namely, a can of Red Bull – does to the body over a 24-hour period.

Energy drinks are marketed as beverages that boost mental and physical performance. Caffeine is the most common stimulant in these drinks, but some brands contain other plant-based stimulants, such as guarana and ginseng.

According to the Substance Abuse and Mental Health Services Administration (SAMHSA), the amount of caffeine in a can or bottle of energy drink can range from 80 mg to over 500 mg. For comparison, one 5-ounce cup of coffee contains around 100 mg of caffeine.

Like soda, energy drinks are also high in sugar. A 250 ml can of Red Bull, for example, contains around 27.5 g of sugar.

Numerous studies have suggested energy drinks can have negative health implications. A 2013 study reported by Medical News Today, for example, found energy drinks alter the heart function of healthy adults, while another study linked energy drink consumption to other unhealthy behaviors, such as smoking.

But what exactly do energy drinks do to the body after we consume them?

According to the infographic, caffeine enters the bloodstream within 10 minutes of consuming an energy drink, triggering a rise in heart rate and blood pressure

Over the next 15-45 minutes, caffeine levels in the bloodstream peak. As a result, an individual will feel more alert and experience improved concentration.

“Caffeine is a crafty drug that temporarily blocks adenosine [a chemical involved in how tired we feel] pathways, giving you a boost while allowing ‘feel good’ molecules in the brain – such as dopamine – to be released more readily. You feel more alert and you feel better about yourself,” science communicator and food researcher Dr. Stuart Farrimond told The Daily Mail.

All of the caffeine is absorbed within 30-50 minutes of consuming an energy drink, according to the infographic, and the liver responds to this by soaking up more sugar into the bloodstream. 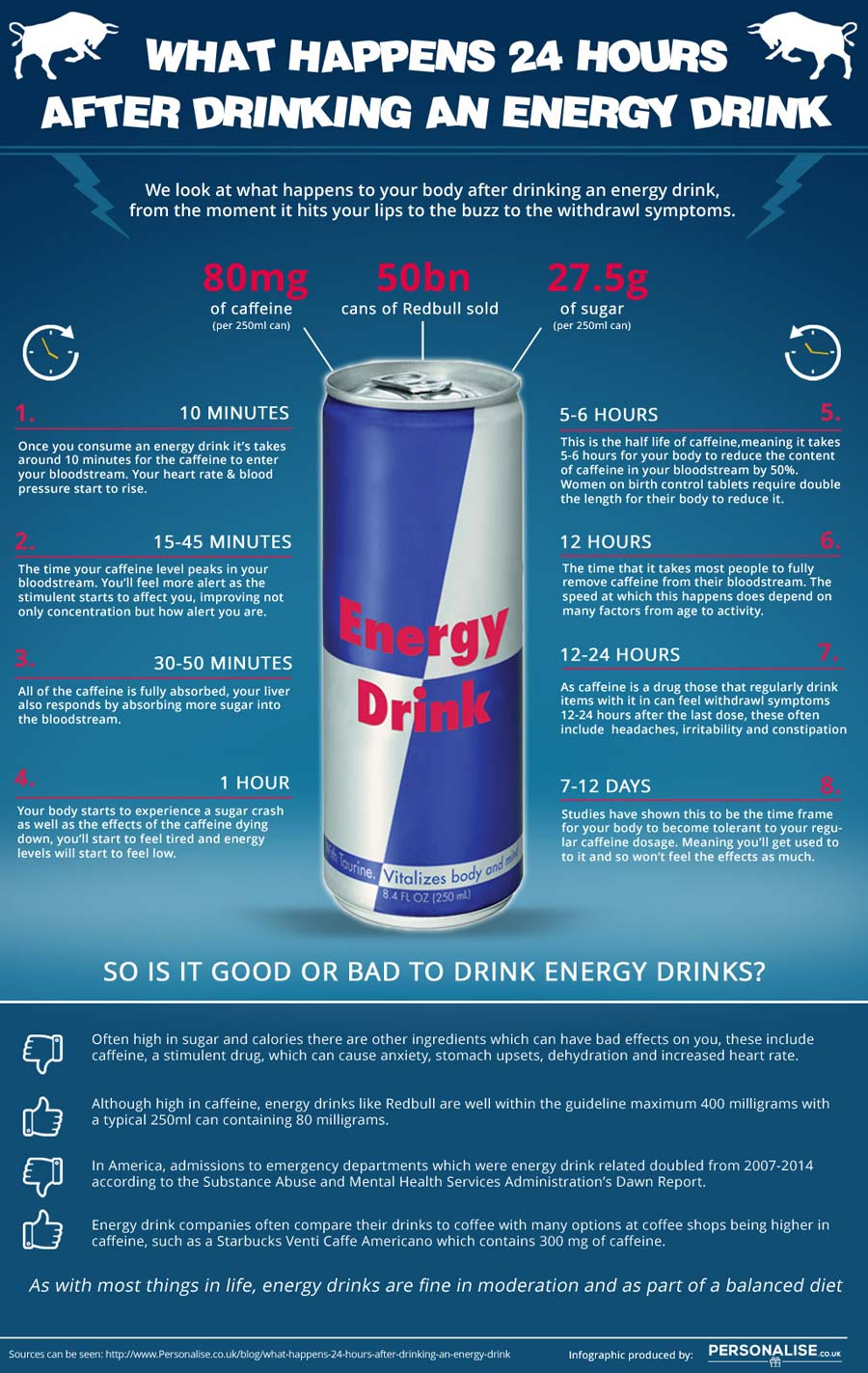 This infographic depicts what happens to the body after consuming a can of energy drink.
Image credit: Personalize.co.uk

Within an hour, the effects of the caffeine will begin to subside and a sugar crash may occur. Energy levels will begin to feel low and tiredness will set in.

It will take around 5-6 hours for the body to achieve a 50% reduction in the amount of caffeine in the bloodstream – known as the “half-life” – and it is likely to take double this amount of time for women on birth control pills. It takes an average of 12 hours for the body to completely remove the caffeine from the bloodstream, though this does depend on individual factors.

“Pregnancy, liver damage and other drugs can also slow the rate at which caffeine is eliminated from the body,” Dr. Farrimond told The Daily Mail. “Importantly, children and teenagers have a significantly longer half-life, meaning caffeine will remain in their bloodstream for longer and at higher levels than for adults. This is why caffeinated drinks can cause behavioral problems and anxiety issues in children.”

The infographic claims that individuals who consume energy drinks regularly may experience caffeine withdrawal in the 12-24 hours after consumption, which includes symptoms such as headache, irritability and constipation.

Dr. Farrimond explained that withdrawal symptoms can last up to 9 days and the severity depends on the amount of caffeine consumed.

For regular energy drink consumers, it takes around 7-12 days for the body to adapt to a regular intake of caffeine, according to the infographic. An individual is unlikely to experience a boost from the beverages once their body gets used to them.

While the information provided in this infographic is not new, it does help shed light on why so many studies have cited the health implications of energy drinks.

Still, energy drink consumption is rising, In the US, sales of the beverages increased by 60% between 2008 and 2012.

Energy drinks are particularly popular with children and adolescents. Last year, Medical News Today reported on a study from the Centers for Disease Control and Prevention (CDC), which found that 73% of children consume caffeine on a daily basis – much of which is coming from energy drinks and coffee.