All over the country, students and parents are busy preparing for the back-to-school season. Part of this preparation is likely to involve stocking up on lotions to combat the dreaded head lice, estimated to infest the scalps of around 6-12 million children in the US every year. Such efforts may prove a lost cause, however, after new research finds the parasites are mutating to develop resistance to some common treatments.

Recently presented at the American Chemical Society’s 250th National Meeting and Exposition in Boston, MA, the research identified at least 25 states in the US where head lice have become resistant to widely used over-the-counter treatments.

The head louse – also known as the Pediculus humanus capitis – is a parasitic insect that most commonly lives on the human scalp, feeding on blood numerous times throughout the day.

The parasites are spread via direct contact with the hair of an infected person, which most commonly occurs among schoolchildren.

Head lice infestations are primarily treated with over-the-counter topical medications. Such treatments often contain permethrin – a part of a family of insecticides known as pyrethroids – which works by killing the head lice and their eggs.

However, according to researcher Kyong Yoon, PhD, of Southern Illinois University in Edwardsville, reports of pyrethroid-resistant head lice have been increasing over the past 20 years, with Yoon himself uncovering such an occurrence in the US in 2000 in a student at the University of Massachusetts.

Shortly after his discovery, Yoon tested head lice samples collected from nearby schools, searching for three gene mutations – M815I, T917I and L920F – collectively known as “knock-down resistance” (kdr) mutations. These mutations were previously identified among house flies that had become resistant to pyrethroids in the 1970s.

Yoon found that many of the head lice tested possessed all three gene mutations, which together, work by altering their nervous system and desensitizing them to the effects of pyrethroids.

For this latest study, Yoon and colleagues set out to gain a better understanding of how widespread pyrethroid-resistant head lice are in the US.

“We are the first group to collect lice samples from a large number of populations across the US,” notes Yoon.

The researchers found that 104 of the 109 head lice populations contained all three kdr mutations – making them 100% resistant to pyrethroids. These populations came from 25 states, including Texas, Florida, California and Maine.

Head lice populations from New York, New Jersey, New Mexico and Oregon were found to have either one, two or three kdr mutations, while Michigan was the only state whose lice population was still strongly susceptible to pyrethroids – a finding Yoon says warrants further investigation.

While these findings raise concern about the effectiveness of common head lice treatments, Yoon says there are still other treatments available containing insecticides that lice have yet to become resistant to – many of which are prescription only. 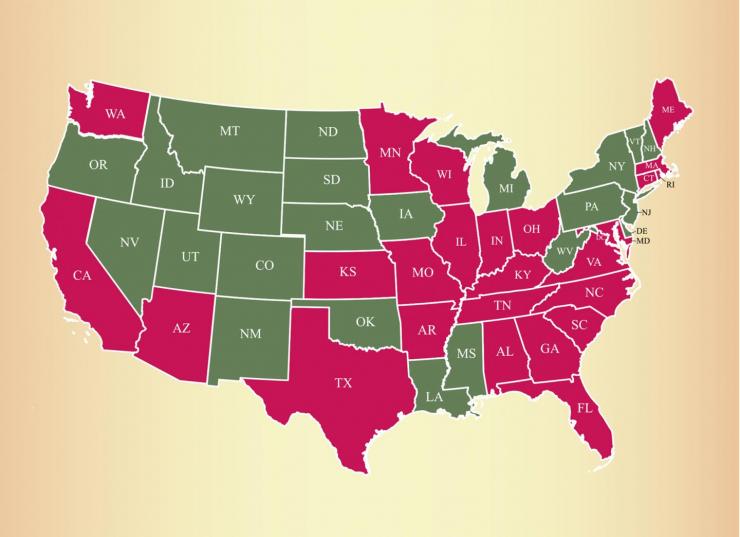 This map shows the US states – highlighted in red – where head lice populations have become 100% resistant to common medications.
Image credit: Kyong Yoon

However, he warns: “If you use a chemical over and over, these little creatures will eventually develop resistance. So we have to think before we use a treatment.”

In May, Medical News Today reported on a study published in Nature Genetics in which researchers warned about the global spread of antibiotic-resistance typhoid.