What will be your cause of death? Interactive test could hold the answer

English-American political activist Thomas Paine once stated: “Nothing, they say is more certain than death, and nothing more uncertain than the time of dying.” But when it comes to knowing how you’re likely to die, a new interactive test could reveal all.

Nathan Yau, a statistician from the University of California-Los Angeles (UCLA), has developed an interactive chart that can calculate how a person is likely to die at a specific age, based on their current age, gender and ethnicity.

Yau created the chart using information from the Underlying Cause of Death database from the Centers for Disease Control and Prevention (CDC), which includes mortality and population data for all counties in the US.

The data is based on the death certificates of all individuals who died between 1999-2014; the certificates disclose a single underlying cause of death and demographic information.

In his blog FlowingData, Yau explains that the CDC arrange causes of death into 113 subcategories, which fall into 20 categories of disease and external causes of death.

Younger adults most likely to die of external causes

To find out their likely cause of death, the user enters their gender, ethnicity and current age, before being presented with an array of colored dots.

“Each dot represents one of your simulated lives, and as each year passes, more of your simulated selves pass away,” Yau explains. “Color corresponds to cause of death, and the bars on the right keep track of the cumulative percentages. By the end, you’re left with the chances that you will die of each cause.”

Yau notes that if you enter current age as zero, then the chart shows there is a low likelihood of dying in the following few decades. Unsurprisingly, for the first 10 years of life, the highest risk of death is from perinatal causes, according to the chart, while external causes begin to take the front place when one reaches early adulthood. 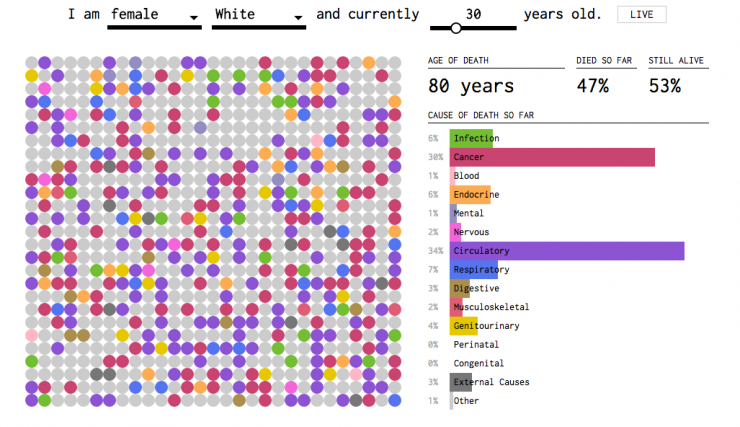 The interactive test predicts the likelihood of dying from certain causes at a specific age.
Image credit: Nathan Yau

“The main point, which is what you’d expect, is that mortality rate is much lower in the earlier years of life than in the older years,” notes Yau. “But, if you do die at a younger age, it’s much more likely due to something external rather than a disease.”

On the other hand, the chart shows that an elderly person is much more likely to die of disease than external causes. Yau notes that – regardless of demographic group – adults over the age of 80 have a 40% chance of dying from circulatory problems.

“This surprised me, because it seems like cancer would be the leading cause just going off general news,” says Yau. “This is certainly true up to a certain age, but get past that and your heart can only keep going for so long.”

Of course, there are numerous factors that influence how and when a person will die, so the information presented in the interactive chart only acts as a model of probability.

Overall, Yau’s aim is to “make data available and useful to those who are and aren’t necessarily data experts,” and it goes without saying that the data presented in his latest offering is certainly interesting.

Last October, Medical News Today reported on a study that found there are fewer deaths in the US from leading causes, such as cancer, heart disease and stroke.