Heart disease declines in US, but disparity grows

Statistics published this week in Circulation show that, although the rate of heart disease is declining in America overall, some areas are improving much slower than others. There are also marked regional variations that are gradually morphing over the decades.

More than 600,000 people in America die at the hands of heart disease each year.

This accounts for around 1 in 4 deaths, making it the leading cause of mortality in the US.

For the first time, data from 1973-2010 has been analyzed on a county level, highlighting which states have the highest rates of heart disease.

Although the risk factors for heart disease are known to include smoking, excess weight, cholesterol, diabetes and high blood pressure, there is a complex web of social and economic factors that impact these parameters.

This new analysis examines which American counties have an increased risk of heart disease, compared with others.

The research team was headed up by Michele Casper, of the Centers for Disease Control and Prevention’s (CDC’s) Division for Heart Disease and Stroke Prevention in Atlanta, GA.

The current study into the prevalence of heart disease in America is of unprecedented size and scope. The team looked at heart disease data for individuals under the age of 35 in more than 3,000 US counties between 1973-2010. Casper says:

“This is the most comprehensive study to compare county-level patterns of geographic disparities in heart disease death rates over an extended timeframe.”

Although overall, heart disease mortality has declined, the geographical distribution of the most affected areas has shifted over time. Additionally, some areas have seen significantly steeper declines in illness than others.

Some counties’ cardiac death rates were shown to have dropped by more than 80% since the 1970s, whereas some had declined by less than 10%.

The counties showing the slowest decline were mostly to be found in Mississippi, Alabama, Louisiana, Oklahoma, Arkansas and Texas. The areas with more substantial rates of improvement were largely seen in the northern half of the US.

Over the course of the research, the gap between the areas of least heart disease and those with the highest levels has almost doubled in size. In other words, the disparity between the best and the worst performers in heart health has grown.

In the 1970s, the highest rates of heart disease-related deaths were found in the northeastern counties, comprising parts of the Appalachia and into the Midwest, with the coastal areas of North Carolina, South Carolina and Georgia also being affected.

The following map shows the prevalence of heart disease by county in 1973-1974:

Scroll forward almost 4 decades and the highest rates of heart disease related deaths have moved south of the Mason-Dixon Line.

The next map shows the country’s heart disease rates in 2009-2010, with the shifting epicenter of heart disease moving in a southerly direction: 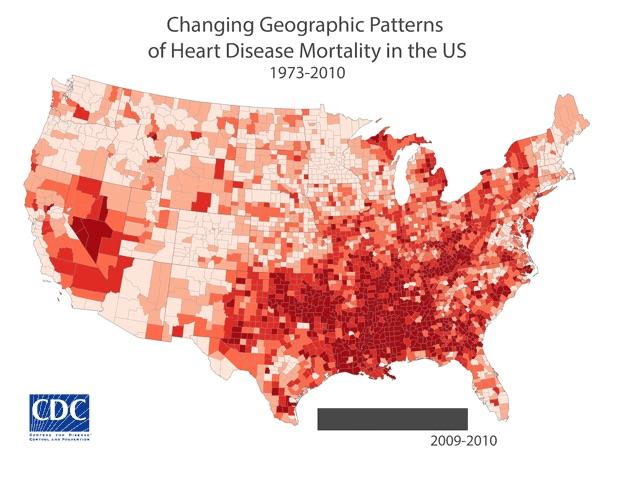 The research did not delve into the precise reasons for these differences and their shifting patterns, but there are likely to be a great number of parameters at play. These factors might include local health policies, socioeconomic factors, ease of access to healthy food, health care, promotion of smoke-free environments and opportunities for physical activity.

Although the news, in general, is positive, there is still a long way to go. Casper says:

“Despite the overall decline in heart disease death rates, heart disease remains the leading cause of death in the United States, as well as one of the most widespread and costly health problems facing the nation.”

Medical News Today recently covered research showing that the global rate of injuries has dropped since the 1990s.