The adverse health effects of air pollution are great in number. Among the list are asthma, throat irritation, eye and skin irritation, sudden illness and even death. But air pollution also increases toxic chemicals in the blood, causing stress on the immune system and weakening the placenta surrounding a fetus. This can lead to preterm birth, and now, researchers say the financial burden of this chain reaction is in the billions each year.

“Air pollution comes with a tremendous cost,” says Dr. Trasande, “not only in terms of human life, but also in terms of the associated economic burden to society.

Medical News Today recently reported that rising pollution levels are linked to increased strokes. Researchers from that study reported that the US and China are “the world’s two largest emitters of greenhouse gases,” which are responsible “for about one third of global warming to date.”

In what they are saying is the first investigation into costs of premature births due to air pollution in the US, the new study authors examined data from the Environmental Protection Agency (EPA), the Centers for Disease Control and Prevention (CDC) and the Institute of Medicine.

First, the team calculated the average air pollution exposure and premature births per county. Next, they made estimates of the long-term health consequences of premature birth – using previous investigations and computer models that looked into early death, decreased IQ, hospital-related work absences and poor health.

Results of their investigation reveal that slightly more than 3% of premature births are linked to air pollution, and the annual economic cost of these premature births in the US is $4.33 billion per year.

This total includes $760 million spent on extended hospital stays and long-term use of medicines, as well as $3.57 billion in lost economic productivity from physical and mental disabilities linked to preterm birth.

The team also found that the number of premature births associated with air pollution was highest in urban counties, particularly those in Southern California and the Eastern US. Peak numbers were found in the Ohio River Valley.

The research team has made an infographic of their findings: 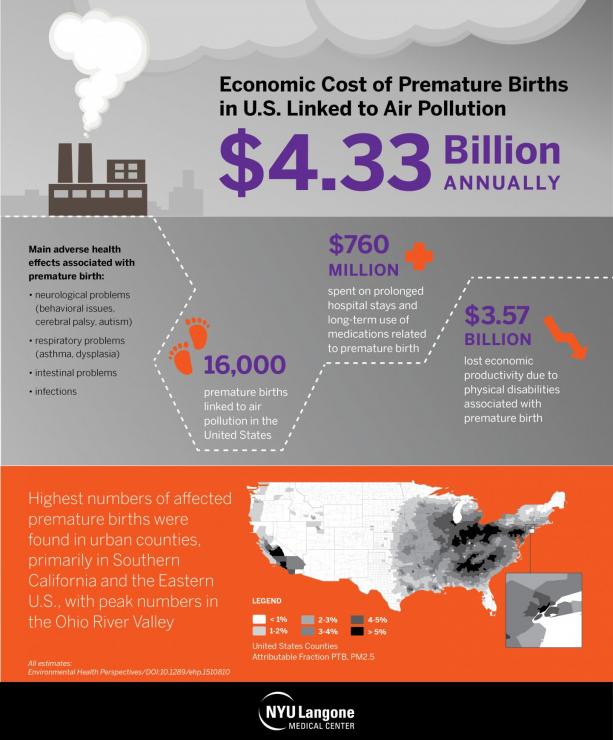 Although the percentage of premature births in the US has declined from 12.8% in 2006 to 11.4% in 2014, Dr. Trasande says the number is still higher than those of other developed countries.

He and his team plan to carry out further investigations into the role of specific pollutants, including particulate matter, which is one of the CDC’s “criteria” air pollutants that the organization regulates due to health effects.

The researchers plan to look into whether any pregnancy stages are more vulnerable to the negative health effects of such types of air pollution, including an increased risk of heart and lung diseases.

“It is also important to note that this burden is preventable, and can be reduced by limiting emissions from automobiles and coal-fired power plants.”

MNT previously investigated pollutants that may be lurking in your home, affecting your health.