An innovative, non-invasive neurotechnology balances the brain frequencies in the left and right hemispheres, reducing blood pressure and removing the symptoms of migraine. This week, the results of two experiments confirm that the intervention shows real promise.

The results of two fascinating studies were recently presented at the American Heart Association’s Council on Hypertension 2016 Scientific Sessions.

If the results are replicated, they could signal a revolution in the way that both mild hypertension and migraine are treated.

The studies used a neurotechnology called high-resolution, relational, resonance based, electroencephalic mirroring, or HIRREM for short.

HIRREM uses sensors that are placed on the scalp; they measure electrical activity, any imbalances between the left and right brain, and hyperarousal.

Hossam A. Shaltout, assistant professor in the Hypertension and Vascular Research Center at Wake Forest School of Medicine in Winston-Salem, NC, explains the premise of his research.

“Most people have relatively balanced electrical activity between the right side and left sides of the brain.

Imbalance, with one side dominant, or more active, may reflect autonomic dysregulation associated with the effects of chronic stress, which is thought to play a role in high blood pressure, migraines, insomnia, depression, hot flashes, and more.”

HIRREM monitors the brain’s electrical activity. As it registers the levels, it translates them into an audible signal, which it repeats back to the person whose brain is being monitored.

According to Wake Forest School of Medicine, where the system was designed, HIRREM is a:

This real-time feedback has a significant effect on the brain’s output. Shaltout explains: “Gradually, and on its own, with no conscious, cognitive activity required, the electrical pattern tends to shift towards improved balance and reduced hyperarousal.” The two before and after images below demonstrate the type of response that HIRREM can generate. 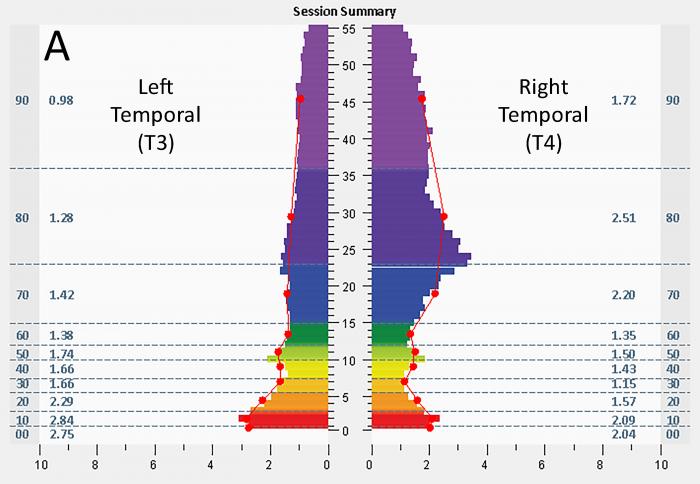 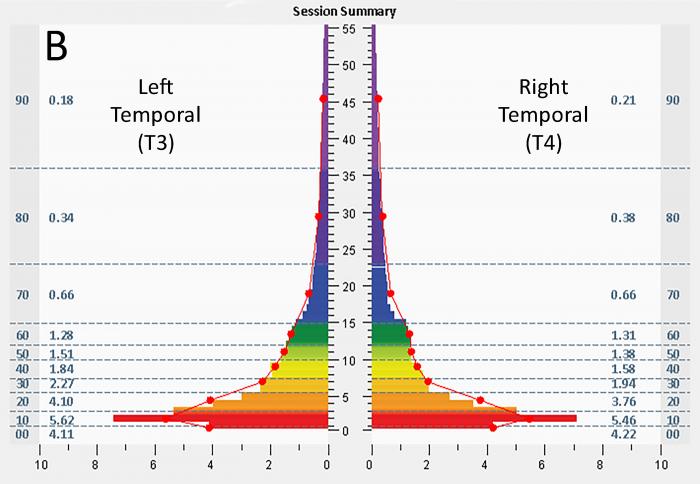 The theory is that trauma, whether physical or otherwise, can lead to disturbances in the brain’s normal activity. For instance, if the brain’s fight-or-flight (sympathetic) nervous system is activated and, for whatever reason, not able to return to normal, it could be unhealthy and contribute to disease.

HIRREM’s designers are careful not to imply that their creation is a medical device. Their website says: “HIRREM […] is not intended to treat, cure, heal, or diagnose any disease, mental illness or symptom, and individual results and duration of effects may vary.”

However, its fascinating potential has not been ignored by medical researchers. The first study to be presented at the scientific sessions involved 10 participants (half men, half women) with stage one hypertension. After an average of 17.7 HIRREM sessions, spread over an average of 10.2 in-office days, the patients showed a significant improvement.

Heart rate variability refers to a variation in the interval between heart beats; in the current study, the participants’ variability increased from an average of 42 to 57.

An increase in variability is a good thing. According to Shaltout: “The more flexibility and dynamic range the body has to be able to change the heart rate in response to the blood pressure, the better.”

In the , 52 adults with migraine were treated. They received an average of 15.9 HIRREM sessions over 9 in-office days. Patients reported improvements in insomnia, headaches, and mood.

Of course, due to the studies’ small size, it is difficult to extrapolate the results; however, these two investigations are just a small part of a larger research program that has now enrolled over 400 participants. “If these findings are confirmed in larger controlled studies, HIRREM may prove to be a valuable new approach for brain-based healthcare,” Shaltout said.

Finding a solution that offers an improvement to medical issues that are notoriously difficult to treat, without the need for invasive techniques, could be a real breakthrough.

No doubt many insomnia and migraine sufferers will be waiting to hear the results of the larger trial with baited breath.

Read how migraines might be linked to fluctuations in estrogen.