What is a cell?

Humans are made up of trillions of cells — the basic unit of life on earth. In this article, we explain some of the structures found in cells and describe a few of the many types of cell found in our bodies.

Cells can be thought of as tiny packages that contain minute factories, warehouses, transport systems, and power plants. They function on their own, creating their own energy and self-replicating — the cell is the smallest unit of life that can replicate.

However, cells also communicate with each other and connect to create a solid, well stuck-together animal. Cells build tissues, which form organs; and organs work together to keep the organism alive.

Robert Hook first discovered cells in 1665. He gave them their name because they resembled the cella (Latin for “small rooms”) where monks lived in monasteries.

Different cell types can look wildly different, and carry out very different roles within the body.

For instance, a sperm cell resembles a tadpole, a female egg cell is spherical, and nerve cells are essentially thin tubes.

Despite their differences, they often share certain structures; these are referred to as organelles (mini-organs). Below are some of the most important: 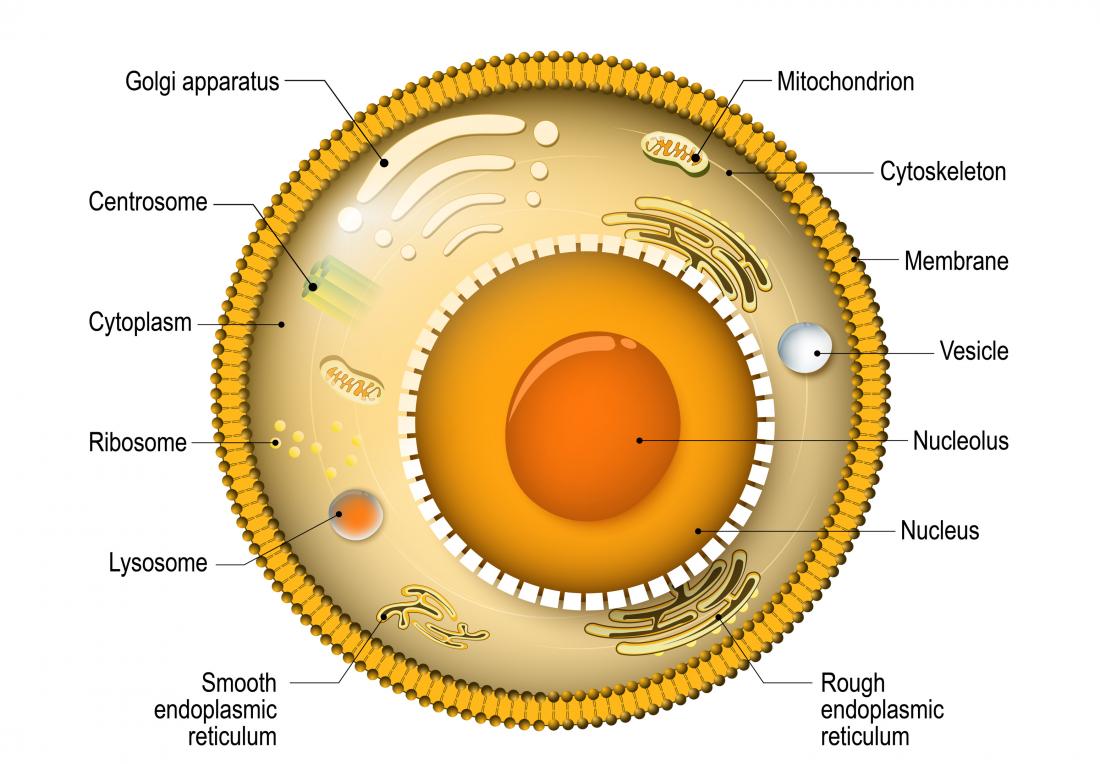 A simplified diagram of a human cell.

The nucleus can be thought of as the cell’s headquarters. There is normally one nucleus per cell, but this is not always the case, skeletal muscle cells, for instance, have two. The nucleus contains the majority of the cell’s DNA (a small amount is housed in the mitochondria, see below). The nucleus sends out messages to tell the cell to grow, divide, or die.

The nucleus is separated from the rest of the cell by a membrane called the nuclear envelope; nuclear pores within the membrane allow through small molecules and ions, while larger molecules need transport proteins to help them through.

To ensure each cell remains separate from its neighbor, it is enveloped in a special membrane known as the plasma membrane. This membrane is predominantly made of phospholipids, which prevent water-based substances from entering the cell. The plasma membrane contains a range of receptors, which carry out a number of tasks, including being:

The cytoplasm is the interior of the cell that surrounds the nucleus and is around 80 percent water; it includes the organelles and a jelly-like fluid called the cytosol. Many of the important reactions that take place in the cell occur in the cytoplasm.

The cytoskeleton can be considered the scaffolding of the cell. It helps it maintain the correct shape. However, unlike regular scaffolding, the cytoskeleton is flexible; it plays a role in cell division and cell motility — the ability of some cells to move, such as sperm cells, for instance.

The cytoskeleton also helps in cell signaling through its involvement in the uptake of material from outside the cell (endocytosis) and is involved in moving materials around within the cell.

The endoplasmic reticulum (ER) processes molecules within the cell and helps transport them to their final destinations. In particular, it synthesizes, folds, modifies, and transports proteins.

The ER is made up of elongated sacs, called cisternae, held together by the cytoskeleton. There are two types: rough ER and smooth ER.

Once molecules have been processed by the ER, they travel to the Golgi apparatus. The Golgi apparatus is sometimes considered the post office of the cell, where items are packaged and labeled. Once materials leave, they may be used within the cell or taken outside of the cell for use elsewhere.

Often referred to as the powerhouse of the cell, mitochondria help turn energy from the food that we eat into energy that the cell can use — adenosine triphosphate (ATP). However, mitochondria have a number of other jobs, including calcium storage and a role in cell death (apoptosis).

In the nucleus, DNA is transcribed into RNA (ribonucleic acid), a molecule similar to DNA, which carries the same message. Ribosomes read the RNA and translate it into protein by sticking together amino acids in the order defined by the RNA.

Some ribosomes float freely in the cytoplasm; others are attached to the ER.

Our body is constantly replacing cells. Cells need to divide for a number of reasons, including the growth of an organism and to fill gaps left by dead and destroyed cells after an injury, for instance.

There are two types of cell division: Mitosis and meiosis.

Mitosis is how most of the cells in the body divide. The “parent” cell splits into two “daughter” cells.

Both daughter cells have the same chromosomes as each other and the parent. They are referred to as diploid because they have two complete copies of the chromosomes.

Meiosis creates sex cells, such as the male sperm and female egg cells. In meiosis, a small portion of each chromosome breaks off and sticks to another chromosome; this is called genetic recombination.

This means that each of the new cells has a unique set of genetic information. It is this process that allows genetic diversity to occur.

So, in brief, mitosis helps us grow, and meiosis makes sure we are all unique.

When you consider the complexity of the human body, it is no surprise that there are hundreds of different types of cell. Below is a small selection of human cell types:

Stem cells are cells that are yet to choose what they are going to become. Some differentiate to become a certain cell type, and others divide to produce more stem cells. They are found in both the embryo and some adult tissues, such as bone marrow.

There are at least three primary types of bone cell:

There are three major types of blood cell:

Also called myocytes, muscle cells are long, tubular cells. Muscle cells are important for a huge range of functions, including movement, support, and internal functions, such as peristalsis — the movement of food along the gut.

These tadpole-shaped cells are the smallest in the human body.

They are motile, meaning that they can move. They achieve this movement by using their tail (flagellum), which is packed with energy-giving mitochondria.

Sperm cells cannot divide; they only carry one copy of each chromosome (haploid), unlike the majority of cells, which carry two copies (diploid).

Compared with the sperm cell, the female egg cell is a giant; it is the largest human cell. The egg cell is also haploid so that the DNA from the sperm and egg can combine to create a diploid cell.

Fat cells are also called adipocytes and are the main constituent in adipose tissue. They contain stored fats called triglycerides that can be used as energy when needed. Once the triglycerides are used up, the fat cells shrink. Adipocytes also produce some hormones.

Nerves cells are the communication system of the body. Also called neurons, they consist of two major parts — the cell body and nerve processes. The central body contains the nucleus and other organelles, and the nerve processes (axons or dendrites) run like long fingers, carrying messages far and wide. Some of these axons can be over 1 meter long.

Cells are as fascinating as they are varied. In one sense they are autonomous cities that function alone, producing their own energy and proteins; in another sense, they are part of the huge network of cells that creates tissues, organs, and us.