This week, we attended the Wired Health conference in London. As always, the event was jam-packed with innovators jostling for position in the race toward a brighter, healthier future.

Wired Health is held yearly in London, United Kingdom. It boasts a wide array of speakers from every corner of the health tech world, alongside forward-thinking companies who provide a glimpse of their latest offerings.

This year was as varied as ever, and the talks covered how technology could intervene in issues as diverse as HIV, bereavement in children, and cardiovascular surgery.

I spent the majority of my time at the EY WIRED Health Access Stage, which featured an annual showcase of start-up companies.

For me, the over-arching theme this year was one of consolidation. I saw less focus on newfangled technology and more emphasis on the use of recent innovations in more efficient ways.

Rather than designing solutions from the bottom up, it seems to be more about capitalizing on hard-won inventions of the recent past.

We have the data — now what?

Early on in the proceedings, Pamela Spence — the Global Life Science Leader at EY — reminded us that we are currently knee-deep in the fourth industrial revolution. And, key to this brave new dawn is that four letter word that promises so much: data.

Today, capturing data is easier than ever. There are more data available to us than we could have dreamt of just a decade ago. We have almost unlimited processing power at our fingertips.

The question is, which bits do we pay attention to, who gets to share it, and what shall we do with it?

Spence spoke of the problems with collating this new-found swarm of numbers. Healthcare data tend to be spread out and distributed into different silos.

This is the future of health tech. However, at the moment, you get the feeling that the data we are harnessing are nowhere near as useful as they promise to become.

One company bent on harnessing medicine’s new-found ocean of data is Heterogeneous. Though gene sequencing has been available for some time, Heterogeneous are offering whole-genome sequencing at rates cheaper than could have been imagined just a handful of years ago.

Anyone can sign up, and, once you have had your genome sequenced, you get full ownership of your data. You are then able to select which research projects you would like to make your data available to.

Heterogeneous pass your genome (anonymously) over for their study. The researchers receive good-quality data quickly, and you receive the warm satisfaction of advancing science passively from your armchair.

This is not a new idea; plenty of companies offer genomic information to consumers. However, most other companies sell these data to third parties without informing the customer. This is completely legal and above board, but Heterogeneous want to be part of a more open and collaborative future.

Although many of the changes in healthcare are predicted to come from the rich tapestry of data that we collect, there are also changes at the other end of the spectrum: personalized medicine.

Bruce Levine — from the University of Pennsylvania in Philadelphia — spoke to an enthralled audience about his work with chimeric antigen receptors (CAR)-T cell therapy.

In this technology, cancer patients’ immune cells, or T cells, are removed, then genetically trained to target cancer cells and reintroduced into the patient.

Already tested in leukemia and lymphoma, CAR-T can save lives — a single infusion with the newly trained T cells can wipe out “kilograms” of tumor cells. Though the method cannot yet attack solid tumors, Levine and his colleagues are hot on their heels.

This intervention is very much tailored to the individual. In fact, he likened it to an organ transplant rather than a pharmacological intervention, calling it the “ultimate in personalized treatment.” The patients’ own cells are groomed to recognize and destroy the specific cancer that they carry.

Levine’s story also provides a little insight into how quickly a medical technique can move from the outskirts to the mainstream.

He recalled that, just a few years back, he and the other researchers investigating the potential of CAR-T were regarded as the “quaint” guys in the corner. Now, they’re the “hot thing,” Food and Drug Administration-approved, and, rightfully, the center of attention.

Tech conferences the world over are awash with smartphones and apps. I had to stop myself from rolling my eyes when I saw the number of app-based solutions at Wired Health this year. But I shouldn’t roll my eyes.

Yes, I was disappointed that there weren’t more laser-wielding robots and X-ray-powered rocket shoes, but this was a science conference, not a science fiction conference (Medical News Today won’t pay for my Comic-Con ticket).

Apps are accessible to millions of people worldwide via a few taps on a device kept in their pocket. Their incredibly swift rise to ubiquity — let’s try to remember that Apple’s App Store only opened its digital doors in July 2008 — makes them a potentially powerful tool for the good of humanity’s health, if wielded in the right hands.

One such pair of safe hands belongs to Clinova, who have developed an app called Caidr.

Any health-focused conference in the U.K. is almost duty-bound to mention the struggling British National Health Service. Although the reasons for its troubles are largely political, finding ways to cut corners and save cash are of particular interest.

Caidr, which was designed by two pharmacists, helps users to “distinguish minor ailments from a more serious illness.” By answering a series of simple questions, the app’s algorithms assess whether they need to visit a doctor or if a pharmacist could offer effective over-the-counter medications. 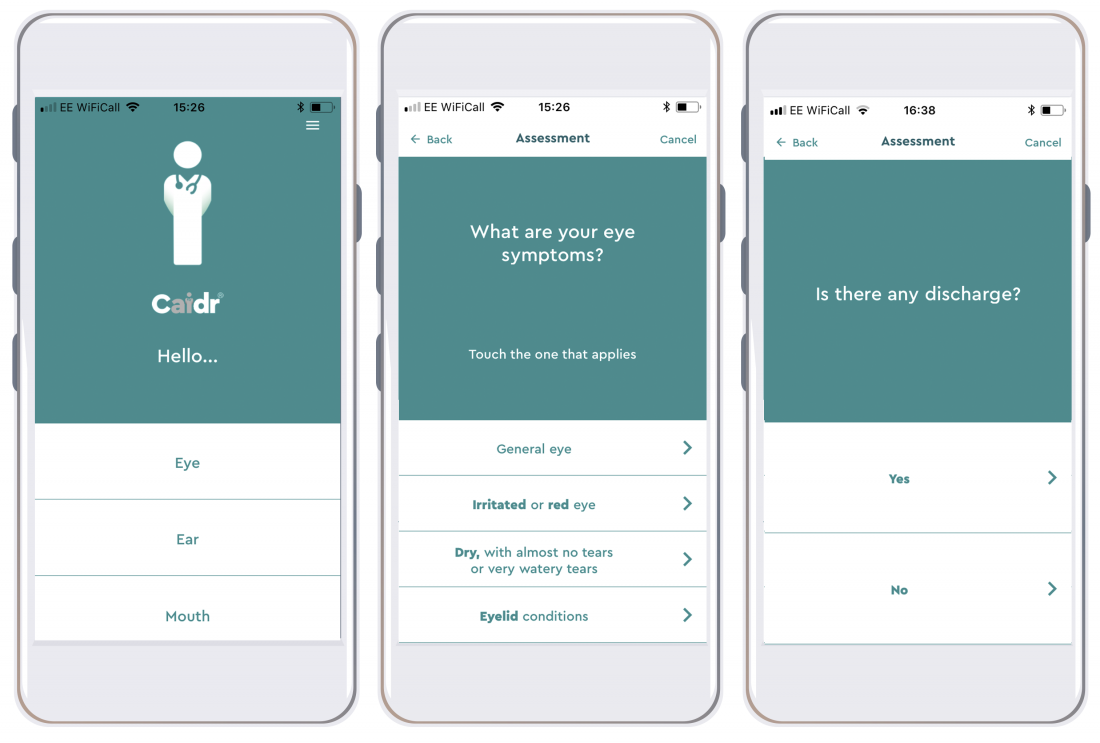 Some examples of Caidr screenshots.

In the United States, where waiting times to see a doctor have sky-rocketed over recent years, this app could help to take the pressure off.

Another company who are offering an easier, mobile-based route to healthcare is Index Ventures, who have created an app called Kry. The app allows you to speak with a doctor directly via your cell phone.

This saves both the doctor’s and patient’s time and is significantly easier than having to take time off work or juggle other commitments to visit the doctor’s office. It is particularly useful for people who cannot visit the doctor easily or who live in isolated regions.

Kry is already part of Sweden’s health service, and 2 percent of all primary care appointments take place through the app. Again, this is a good example of technology that has been around for quite some time that is now being used in new and useful ways.

A company called Modius have created a wearable device that stimulates the eighth cranial nerve, helping people to lose weight.

Yes, that might sound like the science fiction I was hoping for, but it is grounded in solid neuroscience.

As we evolved over thousands and thousands of years, we faced starvation at every turn.

Because a lack of food was a constant driving force in our development, our bodies adapted to make it very difficult for us to lose weight.

During prehistory, keeping an extra layer of fat was an excellent way to survive. But, now that we have access to enough food to kill ourselves, holding on to fat is no longer such a beneficial adaptation.

The hypothalamus, deep within the brain, helps decide when and how to lay down fat. The Modius device is able to stimulate one of the cranial nerves that runs fairly close to the surface of the skin, sending a current through to the brainstem.

From there, the stimulation moves on to the hypothalamus, reducing appetite and encouraging the body to move toward a leaner state.

The eighth cranial nerve is also called the auditory vestibular nerve because it plays a role in our sense of balance. According to one of Wired Health’s staff members — who volunteered to try the brain stimulation device — it makes you feel a little dizzy. It’s not unlike the after effect of a glass of wine, apparently.

It can also make the user feel a little sleepy, in the same way that rocking a baby stimulates the vestibular system and makes them woozy.

This is not a miracle cure by any stretch, but for people who find it difficult to lose weight who are active and eating well, this may provide a much-needed edge.

Although the brain stimulation technology is, in this instance, cutting edge, the theory behind it was first uncovered by NASA in 1972, although they didn’t realize it at the time. It took another 30 years to understand that stimulating the vestibular system causes a reduction in body fat.

The take-home message for me this year is one of regrouping. In the past decade, there has been so much innovation that each strand of tech is still waiting to come to fruition.

Today, we see technology that has already been fine-tuned finally being used to benefit global health. It’s an interesting and app-heavy time for medical science.