Chickenpox vs. measles: What's the difference?

Both diseases used to be common childhood infections, but now are preventable through vaccination. There are still far fewer cases of measles in the US each year than chickenpox.

Let’s take a deeper look at chickenpox and measles and see what makes them different. 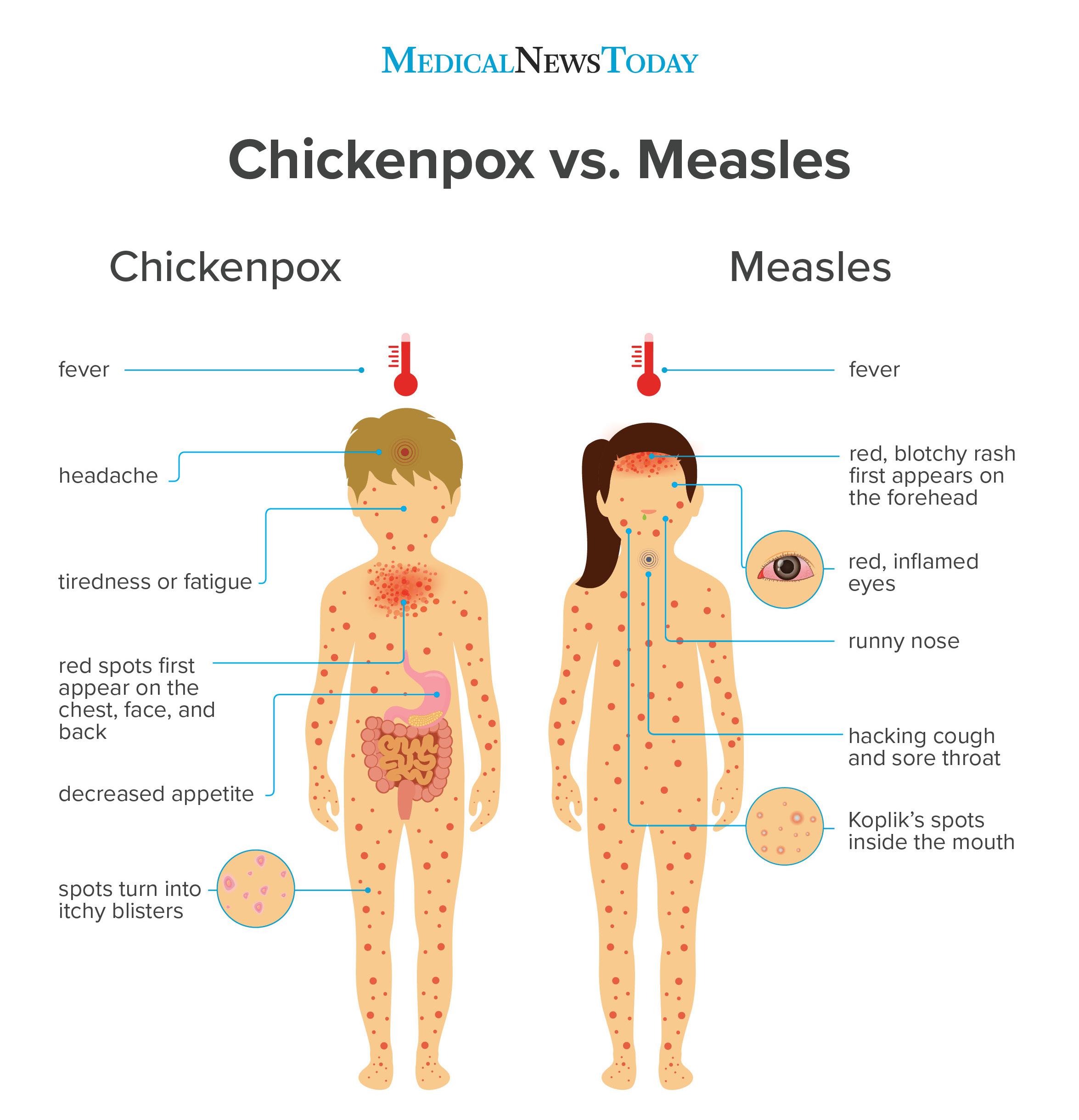 The symptoms of chickenpox include:

The common symptoms of measles include:

While both diseases cause a telltale rash to develop, the appearance of the rash differs between the two viruses. This can be a simple way to distinguish between the two diseases.

The chickenpox rash starts with raised red bumps or papules. These bumps turn into itchy fluid-filled blisters, or vesicles, that will eventually rupture and leak before scabbing over.

The measles rash appears as flat red spots, although raised bumps may sometimes be present. If bumps appear, they do not have fluid in them. The spots of the measles rash may begin to run together as the rash spreads.

Both chickenpox and measles are highly contagious, meaning that you can easily spread them to others.

Chickenpox is spread through inhaling respiratory droplets that are generated when a sick person coughs or sneezes. It can also be spread through contact with contaminated surfaces or with fluid from the ruptured blisters.

You’re contagious with chickenpox up to two days before the rash appears. You’ll remain contagious until all of your spots have crusted over.

Like chickenpox, measles can be spread through the air when a sick person coughs or sneezes as well as through contact with a surface or object that has been contaminated.

Measles is contagious up to four days before the rash appears and then for four days afterward.

Since both chickenpox and measles are caused by a viral infection, treatment is focused on easing symptoms until the infection clears.

Since the chickenpox rash can be very itchy, your doctor may prescribe an antihistamine to help with itching.

Some people are at high risk for complications from chickenpox infection, including:

These groups may be prescribed an antiviral medication, such as acyclovir, which can help to decrease the severity of the infection.

If you think you’ve been exposed to measles (or chicken pox if you’ve not had the disease) and you aren’t vaccinated, you may be given the vaccine and possibly a protein called immune globulin as a post-exposure therapy. If you do come down with measles or chicken pox, the disease may be milder.

You can help ease the symptoms of both infections by doing the following:

Follow the tips below for dealing with the chickenpox rash:

Chickenpox and measles can be prevented through vaccination.

If you weren’t vaccinated for either disease as a child, you should plan to get vaccinated. This not only protects you from infection, but also helps to prevent chickenpox and measles from circulating within your community.

A chickenpox infection typically lasts between 5 and 10 days. Chickenpox is typically mild, but can cause severe complications in at-risk groups.

Once you’ve had chickenpox, it’s very unlikely that you’ll get it again. However, the virus remains dormant within your body and can reactivate as shingles later in life.

Once you’ve had measles, you can’t get it again.