What can cause a rash on the face in a baby?

In babies, most facial rashes are harmless and tend to clear up without treatment. Causes can include eczema, acne, and infection.

Sometimes, however, a rash on a baby’s face can indicate a more serious condition.

Being able to distinguish between different rashes can help a parent or caregiver know when to seek professional advice.

In this article, we describe common facial rashes in babies, treatments, and when to see a doctor.

Eczema refers to a group of conditions that cause the skin to become rough, irritated, itchy, and inflamed.

These conditions are common in young children, often appearing between the ages of 6 months and 5 years. Many children grow out of their eczema.

According to the National Eczema Association in the United States, if eczema develops within the first 6 months of life, it tends to appear on the cheeks, chin, forehead, or scalp. The rash will be dry, red, and itchy.

Between the ages of 6 and 12 months, eczema may develop in other parts of the body. The elbows and knees are particularly susceptible when babies start to crawl.

Although the exact cause of eczema is unknown, experts believe that both genetic and environmental factors can play a role.

When trying to establish the cause of a child’s eczema, it may help to keep a diary of symptoms and potential triggers. By avoiding these triggers, it may be possible to prevent flare-ups of symptoms.

Below are some common triggers of eczema in babies:

Treatments for eczema include:

A doctor can consult with a pediatric dermatologist and recommend a course of treatment. They can also advise about triggers and how to avoid them. 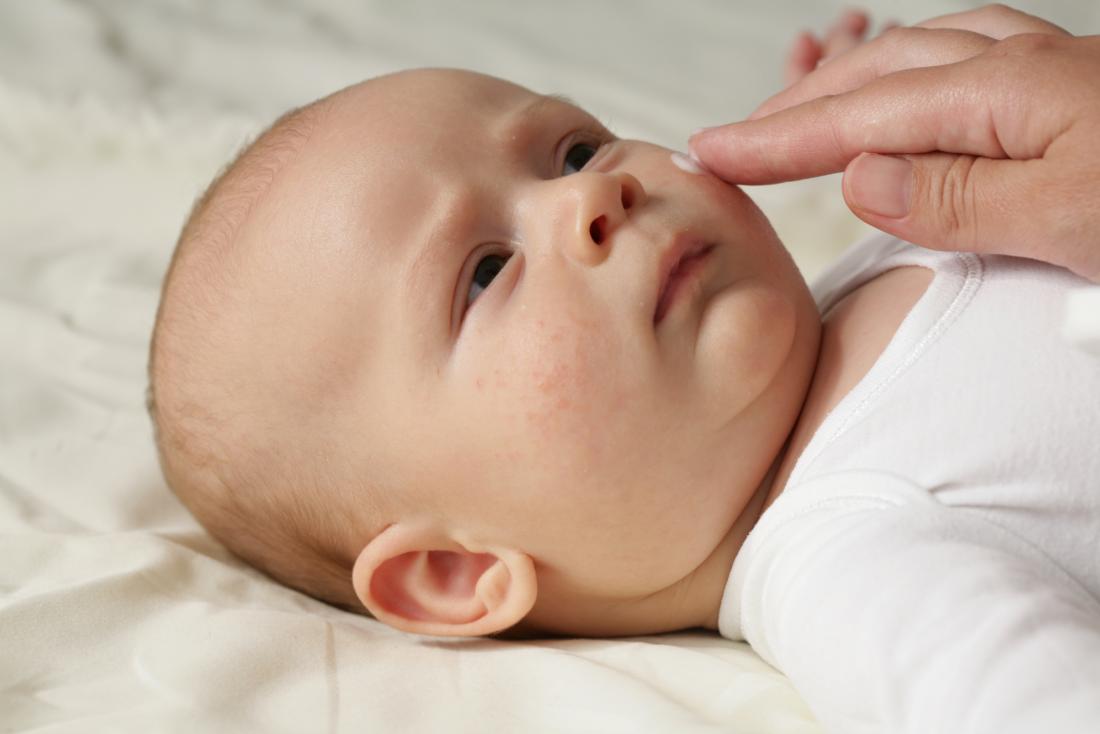 Check that over-the-counter treatments are suitable for infants.

Seborrheic dermatitis causes a rash to develop on areas of skin that contain many oil-producing glands.

In babies, the rash mainly appears on the scalp, and people commonly refer to it as cradle cap. However, cradle cap can also affect the cheeks, particularly around the eyes and nose.

The rash may have the following characteristics:

Cradle cap is generally harmless and usually disappears between 6 and 12 months of age.

If the child is not experiencing any discomfort, treatment may not be necessary.

For mild symptoms, OTC medications, such as antifungal creams and medicated shampoos, may help to relieve discomfort and speed healing. However, talk to a doctor before using these products on an infant.

If the rash is scaly, applying mineral oil or petroleum jelly to the baby’s scalp 1 hour before using an anti-dandruff shampoo can help loosen and remove the scales.

For babies with more severe symptoms, a doctor may prescribe topical steroids to reduce inflammation.

Particularly severe cradle cap can increase the risk of infection. See a doctor immediately, if the baby’s skin:

Around of healthy newborns develop milia, which are tiny white or yellow bumps about 1–3 mm in size.

Milia result from blocked pores and typically develop on the face, often around the eye and nose. The bumps can appear in large numbers, and usually a roughly equal number form on each side of the face.

In babies, milia can also develop in the mouth. In this case, the medical name is Epstein pearls.

Milia tends to clear up on their own within a few weeks, once the pores open up.

No treatment is usually necessary. Avoid using creams and ointments on the baby’s skin, as these can further clog the pores and lead to more milia.

Newborn, or neonatal, acne causes small, red pimples to develop, usually around 2–6 weeks of age. However, some babies are born with them.

The medical term for acne that develops between 6 weeks and 6 months of age infantile acne, and we discuss this below.

Neonatal acne affects around 20 percent of newborns, according to the American Academy of Dermatology.

The pimples tend to develop on the baby’s cheeks and nose, but breakouts can also appear on the:

Generally, newborn acne is not a cause for concern. It is unlikely to cause scarring and tends to clear up without treatment after a few weeks or months.

Parents and caregivers should:

Infantile acne develops in babies older than 6 weeks. It typically appears between 3 and 6 months of age.

Infantile acne is less common than newborn acne. Symptoms can be more severe and may require treatment.

Before treating infantile acne, it is important to rule out other conditions, such as such as eczema and infections, which are more common in this age group.

Infantile acne usually clears up within 6–12 months after it first appears.

After diagnosis, a dermatologist can advise about treating the acne and preventing scarring. If they suspect that the acne results from an underlying medical condition, they may consult a specialist. 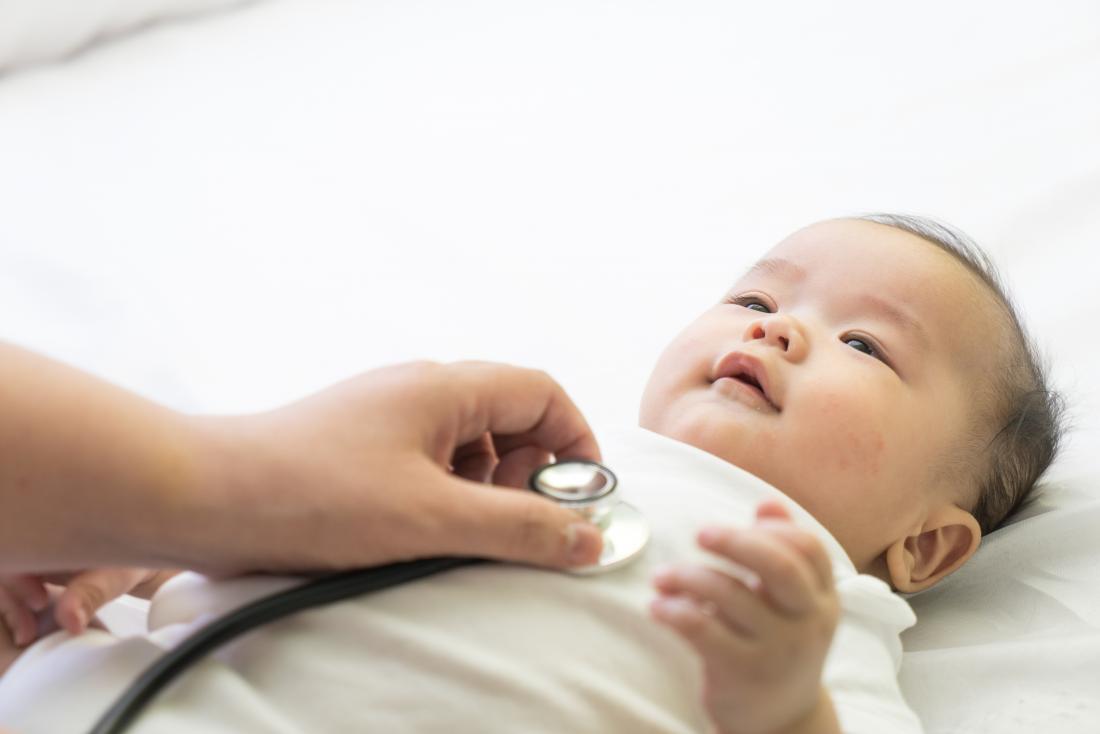 A doctor can diagnose the cause of a rash.

Slapped cheek syndrome is a viral infection. Anyone can get it, but it most commonly develops in school-aged children.

Other names for the syndrome include fifth disease and erythema infectiosum. It results from infection with the B19 parvovirus.

The defining characteristic is a bright red rash on one or both cheeks. The rash is not usually painful. It typically appears within of infection.

The cheek rash often disappears in a few days, but another rash may develop on areas such as the chest, arms, and legs. This rash usually lasts for , but it may come and go.

The rash on the body is usually blotchy and light in color. It can be itchy, but it is not typically painful.

Slapped cheek syndrome can also cause :

Children can initially pass the infection to other children, but it usually stops being contagious once the rash appears.

The symptoms of slapped cheek syndrome are usually mild, and the underlying infection typically clears up without treatment.

OTC medications, such as acetaminophen and ibuprofen, can help relieve any discomfort. However, speak to a doctor before giving these drugs to babies or young children.

Never give a child aspirin, as it may increase the risk of a serious condition called Reye’s syndrome.

Most rashes on babies’ faces are harmless. They usually clear up on their own.

However, a rash in this area can indicate an infection or an underlying health condition.

See a doctor if the rash is severe, or if the baby has:

Facial rashes are common in babies and young children. The many possible causes include eczema, acne, and infection.

Most rashes clear up without treatment. However, see a doctor if a rash is severe or persistent, or if it accompanies other symptoms.