What to know about hepatitis E

Hepatitis E is an infectious virus that attacks the liver, where it causes inflammation and damage. In certain people, this could lead to serious complications over time. Treatment is generally straightforward, and many people do not need medical attention to treat hepatitis E.

According to the , hepatitis E is more common than people may expect.

Recent research indicates that about 20 percent of people in the United States will have the virus at some point in their lives. It may be more common in areas with poor access to clean water.

It can spread in several ways, most commonly through poor-quality drinking water and undercooked meat.

The symptoms of hepatitis E can vary, but they may be serious in some cases. Prevention is the best tool against hepatitis E. 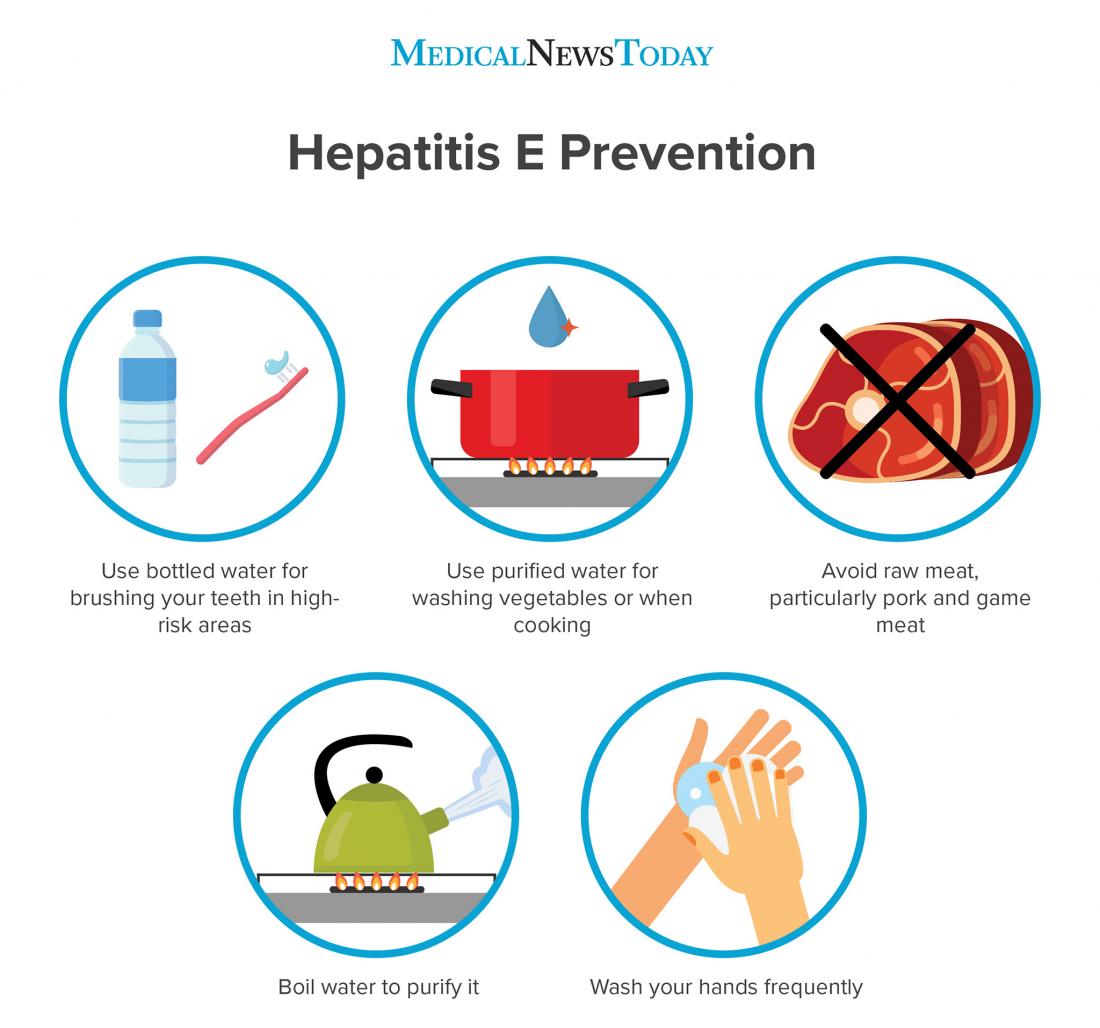 What are the causes?

The hepatitis E virus occurs most often when people consume food or drink that is contaminated with feces.

Fecal matter from humans or farm animals may contaminate the water, which may then carry the virus.

This is more common in developing countries with poor water quality and control, especially in highly populated areas. Traveling to or living in these areas may increase the risk of getting the infection in this way.

In developed countries such as the U.S., the virus tends to spread from animals to humans. Humans may eat undercooked meats, such as pork or venison, that carry the virus. Eating shellfish from tainted waters may be another risk factor.

People who are pregnant and have hepatitis E may also spread the virus to their baby. Apart from in these cases, it is uncommon for people to spread the hepatitis E infection to other people.

That said, in very rare cases, a person may get hepatitis E from a blood transfusion, according to the .

The symptoms of hepatitis E can vary. Some people experience no symptoms at all or symptoms so mild that they hardly notice.

Others, however, can experience a few different symptoms, usually appearing 15–60 days after exposure to the virus.

Possible symptoms of hepatitis E include:

The symptoms tend to disappear as the infection clears.

Complications are possible but rare. This is specially so in at-risk groups of people.

Complications include contracting a long-lasting version of the infection, neurological disorders, and severe liver damage or liver failure, which could potentially be fatal.

Pregnant people are a notable at-risk group. Hepatitis E can affect both the parent and possibly their unborn child. As the note, fatality rates from the infection are as high as 20–25 percent in those in their third trimester of pregnancy.

Hepatitis E may also be more dangerous in people who have a history of liver disorder or chronic liver disease. People who receive a liver transplant and take immunosuppressant drugs may also be at a higher risk of complications.

They will also check the blood for other types of hepatitis, including hepatitis A, B, and C.

If a person tests negative for these types of hepatitis and also has the antibodies that fight hepatitis E in their body, doctors may determine that they have the infection.

Hepatitis E does not tend to require medical treatment, and the body clears the infection without outside help.

However, doctors may recommend some tips to support the body while it is recovering from the infection.

Doctors may also ask about any medications that a person is taking. Some may cause damage to the liver.

Doctors might look at medications and see whether there is a way to limit or eliminate them while a person recovers from the infection. The same applies to many supplements and vitamins.

It is also important for people to see their doctor regularly as the body heals. The doctor may look for any physical changes or track treatment progression, using blood tests to determine whether the body can handle the infection.

In some cases, doctors may prescribe medications for hepatitis E. This may be more common among people who have an especially severe infection.

In rare cases, a person may require hospitalization. Such cases may include a hepatitis E infection that appears in people belonging to at-risk groups.

Preventing hepatitis E is the best way to avoid the infection and its possible complications.

When traveling to developing countries or overcrowded areas with unclean water, be sure to only drink purified water. The easiest way to do this is to drink bottled water at all times.

The same applies to all water use in these areas. Use bottled water for everything from brushing the teeth to washing fruits and vegetables and making food.

The note that boiling or chlorinating water will inactivate the virus.

Anyone with concerns about contracting the virus may also want to avoid raw meats such as pork and wild game such as deer.

As the point out, there is no vaccine with federal approval in the U.S. However, China approved a vaccine for use in that country in 2012.

Preventing the spread of the virus is also important. While it is uncommon to spread the virus among people, anyone with the virus should take care to follow hygiene tips. These include washing the hands with warm water after using the restroom and before making food, for example.

It is usually simple to manage hepatitis E. The symptoms of the virus may be uncomfortable, but the body tends to clear out the virus in 4–6 weeks with little outside help.

Rare complications are possible, and potentially fatal, which is why it is crucial to visit the doctor regularly during the time the infection is present.

There are few deaths from the virus. The estimate that during outbreaks of hepatitis E, the mortality rate is about 1 percent.

However, pregnant people and those with suppressed immune systems have a higher risk of experiencing serious complications.

Anyone who suspects that they have hepatitis E should see their doctor for a full diagnosis and guidelines about proper treatment.