How to tell if your baby has asthma

Wheezing, coughing, and breathing fast are some of the signs that a baby with asthma may display. Asthma is a chronic condition that causes airway inflammation and sensitivity to irritants that most people can inhale without any issues.

Doctors can treat asthma in babies with medications that help open up the airways, which are already small. While it is not always possible to prevent asthma in babies, avoiding asthma triggers, such as smoke, pet dander, pollen, and dust mite exposure, may help reduce the symptoms.

According to the Asthma and Allergy Foundation of America (AAFA), about half of all children with asthma show some signs of the condition before they reach the age of 5 years. Recognizing asthma in babies and seeking medical help can allow parents and caregivers to provide treatments that keep infants breathing well.

People should also note that babies with asthma-like symptoms may not go on to have asthma later in life.

Asthma can be difficult to recognize in babies because it can resemble other respiratory illnesses.

Also, a baby cannot always convey how they are feeling or that they are having difficulty trying to breathe.

Symptoms of asthma in babies include:

Asthma can closely resemble other medical conditions in babies, such as:

Another condition that may cause some symptoms similar to asthma in infants is laryngotracheomalacia. Babies who are born with this condition have a weakness in the cartilage just under the vocal cords.

As a result, they may breathe noisily in the upper airways and trachea, which might sound like asthma. As a baby gets older, these tissues usually become firmer and less likely to collapse.

The primary difference between asthma and some of the above illnesses is that an infant may continue to experience asthma symptoms. Asthma is a chronic condition that can affect a person throughout their life.

Even after an acute illness, they may have persistent symptoms of hyperreactive airways, meaning that the airways in their lungs become smaller and inflamed more easily than those of others. This pattern can aid doctors in making an asthma diagnosis.

Risk factors that can increase the likelihood of an infant developing asthma include:

When children who are aged 6 months and younger experience acute episodes of asthma, a viral infection is usually the cause, according to the AAFA.

Diagnosis and when to see a doctor

Diagnosing asthma in babies can be challenging because the lung function tests that doctors typically perform are not as useful when babies cannot exhale or inhale on command.

As a result, a doctor may use other diagnostic methods, including:

Asthma is a chronic condition with no cure. However, many babies who have asthma-like symptoms, such as wheezing, do not go on to have asthma later in life. This is another reason why diagnosing asthma in babies can be difficult. As a result, a doctor may not definitively diagnose a baby with asthma until later in life.

Sometimes, a doctor will refer a child to an allergy specialist or to a lung specialist called a pulmonologist for further testing and treatment. 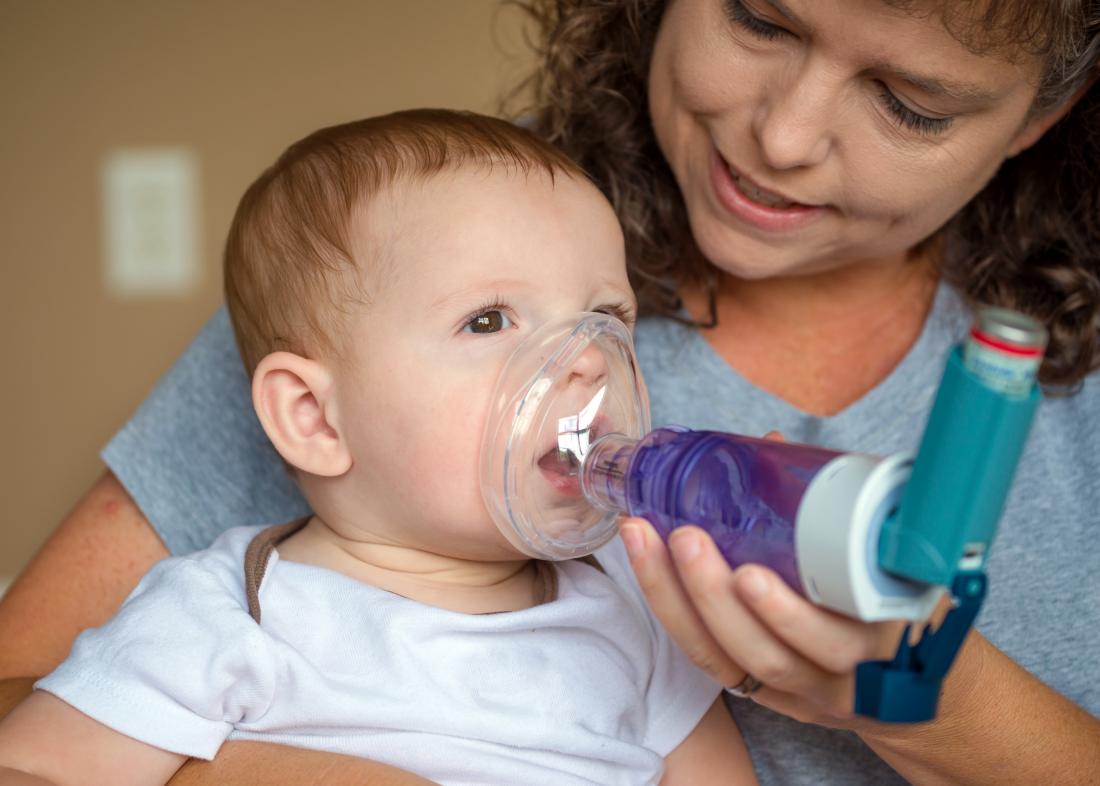 Babies can receive asthma medication through an inhaler with a mask attachment.

Inhalers and nebulizer treatments are the medication delivery systems for asthma.

Even young infants can sometimes receive asthma medications through an inhaler that uses an extra attachment called a spacer and an infant-sized mask.

A nebulizer, which people sometimes refer to as a breathing machine, delivers liquid medication in combination with compressed air. The result is a medicated mist that a baby breathes into their airways.

Wearing the infant-sized mask can help the baby breathe in the medicine. A doctor will recommend how many times per day a baby should receive their asthma medicine.

Some of the medications that require an inhaler or a nebulizer for delivery may be short-acting drugs, such as albuterol (Ventolin). This medication helps quickly open up the airways to make it easier to breathe. A doctor may also prescribe long-acting medications containing steroids that help reduce inflammation and also open up the airways.

Parents and caregivers can protect their child from asthma triggers in the home by:

A parent or caregiver may also wish to talk to their child’s pediatrician before introducing potentially allergenic foods, such as peanuts, cow’s milk, eggs, and wheat, although it is rare for food allergies to cause asthma in babies.

In cases where there is a family history of food sensitivities, it may be beneficial to introduce these foods slowly and in small amounts to ensure that a child does not have an allergic reaction that causes breathing problems.

Wheezing and breathing problems in babies can be a significant concern. As a baby’s airways are already small, conditions such as asthma can make it especially difficult to breathe.

If a person has concerns about their baby wheezing or showing other potential asthma signs, they should talk to their child’s doctor as soon as possible.