What to know about acne face maps

Face mapping comes from ancient Chinese and Ayurvedic medicine. The traditional method links specific locations of acne on the face to health issues affecting organs or systems elsewhere in the body.

There is little scientific evidence to support the theory that health issues with organs in the body relate to where acne breaks out on the face.

However, some research does suggest that specific factors can relate to acne on certain areas of the face. We look at the evidence in this article.

Acne locations and their causes 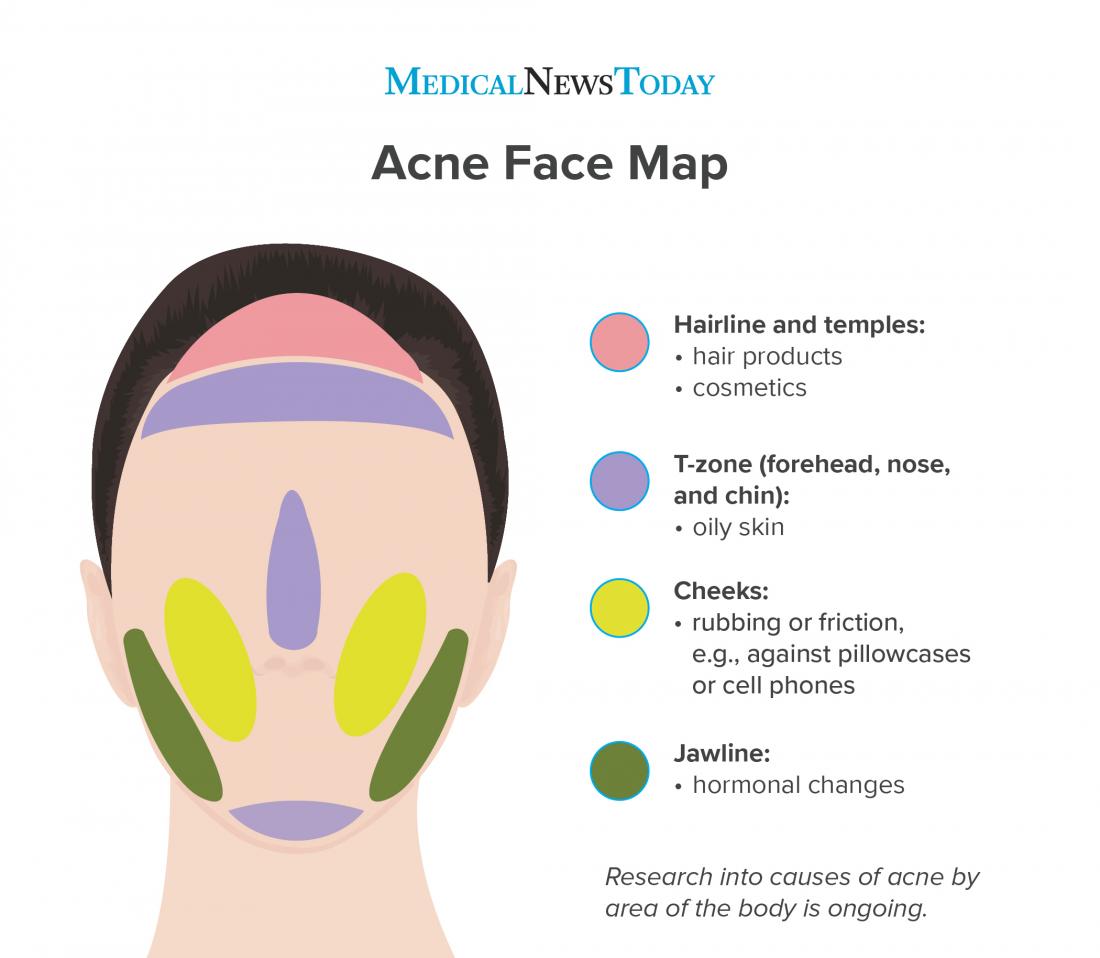 Acne develops when the pores in the skin become clogged with dead skin cells and oil. The result is whiteheads and blackheads.

Bacteria called Propionibacterium acnes also play a role in the inflammation, which results in the red bumps that characterize acne.

Certain areas of the face may be more prone to acne breakouts for various reasons.

Acne around the hairline and temples, called forehead acne, may be due to the use of certain hair products. When this is the case, it is called pomade acne. This can affect both males and females with any skin type.

When oily or waxy hair products spread to the nearby skin of the face, they can block the pores. This can cause acne breakouts.

Certain ingredients in cosmetic products, particularly in products for smoothing the hair, may cause acne. These ingredients include:

Using simpler formulations, or avoiding these ingredients in hair care products, may help prevent acne from forming around the hairline.

It is especially important to prevent oily hair products from coming into contact with the face.

The sebaceous glands produce sebum, which is an oily substance that moisturizes and protects the skin. Excess sebum production can cause acne.

Extra oil production can mean that breakouts may occur more often in these areas than other parts of the face.

One study looked at 914 people with acne. The researchers found a link between sebum production and the amount of acne in the T-zone, which covers the forehead and nose.

Younger people with acne had more acne around the U-zone, which covers the cheeks and chin, than in the T-zone.

Breakouts on the cheeks can occur as a result of acne mechanica, which develops due to friction or rubbing of the skin.

For example, this may occur when a person holds a cell phone against their face, when they move against the pillow in their sleep, and when they wear a piece of equipment or clothing that has a chin strap.

Acne mechanica is not restricted to the cheeks, however. It can occur in different areas of the body depending on the specific occlusive clothing or activity. It is most commonly recognized in athletes.

Addressing the cause of friction against the skin usually results in the improvement of the acne.

Scientists have tended to link acne around the jawline to fluctuations in hormones. However, other researchers have challenged and refuted this notion.

There is no evidence to suggest that acne around the jaw and chin will accurately predict if a person has a hormonal disturbance.

In both males and females, the adrenal glands produce a hormone called DHEA-S. One study found that females with adult acne had mild to moderately elevated levels of this hormone.

Research has also found that 39–85% of females with acne have worse acne in the days before menstruation.

Since many people with acne do not have hormone abnormalities, however, other factors — such as increased sensitivity of oil glands to hormones — may be the cause.

A range of topical treatments can work to fight bacteria, inflammation, and excess oil, all of which can cause acne.

People can buy topical treatments over the counter, or they can look for the following ingredients to target their acne:

For inflammatory acne, including severe cases, a doctor may prescribe a course of antibiotics to fight off bacteria and reduce inflammation. This can be in the form of topical or oral antibiotics.

Isotretinoin, or Accutane, is a drug people that can take to treat severe acne. People usually take it over 4–5 months, although treatment durations can vary from person to person.

However, isotretinoin can have serious side effects. People should discuss these effects with a doctor before starting the treatment, and they should only take the medication under ongoing medical supervision.

Isotretinoin is the closest thing to a cure that physicians have for acne.

A doctor may suggest taking combined oral contraceptives to treat hormonal acne. There are several with Food and Drug Administration (FDA) approval for treating acne.

Experts believe that contraceptives may function through decreasing hormones that may contribute to acne through sebum production.

After 6 months of use, combined oral contraceptives may be just as effective as oral antibiotics. Other progesterone only contraceptives, such as Nexplanon, may make acne worse.

When other methods are not effective, people can also take anti-androgens such as spironolactone as off-label treatments for acne.

A study of 27 females using a combined therapy of an oral contraceptive and spironolactone resulted in 85% of the participants having cleared or improved acne after 6 months.

Gently wash the face once or twice per day, as well as after exercising or sweating, with a mild, nonabrasive cleanser and lukewarm water.

Any product that comes into contact with the skin of the face should be oil free and noncomedogenic to help prevent acne.

Avoid touching the face frequently, as rubbing the skin often may also cause acne. Also, be sure to sleep with clean sheets and pillowcases.

Keeping the hair away from the face and washing the hair after using oily or waxy hair products may help reduce acne around the hairline.

Eating foods that are low on the glycemic index (GI) may also help combat acne. Research has found that native people living in countries that have a low GI diet, such as Papua New Guinea and Paraguay, have no reports of acne.

One study of 43 men with acne found that over the course of 12 weeks, following a low GI diet reduced their acne more than a high carbohydrate diet.

There may also be a link between dairy consumption and acne. This may be due to the hormones still present in the milk or the glycemic load. This tends to occur with skim milk, in particular.

A study looking at 22 people found that acne severity increases during stressful events such as exams. An older study found that relaxation and stress reduction practices improved acne, and acne returned when participants stopped using the techniques.

There is little scientific evidence to support traditional Chinese and Ayurvedic face mapping.

Scientific studies instead suggest that having acne on certain areas of the face may be due to bacteria, excess oil production, hormonal changes, or external factors such as the use of waxy hair products.

If these treatment methods are not effective, or if people have long lasting or severe acne, people can see their doctor or dermatologist for treatment.