Cervical effacement and how to measure it

Cervical effacement refers to the shortening and thinning of the cervix. It is part of the process that helps the cervix prepare for a vaginal delivery.

The cervix connects the lower portion of the uterus to the vagina. Normally, the cervix is around 2.5 centimeters (cm) and is firm and closed.

In preparation for childbirth, the cervix must thin and open up to allow the fetus to pass from the uterus through the vagina.

In this article, we look at cervical effacement, including how it relates to dilation and how to measure it.

What is cervical effacement?

Cervical effacement is the shortening and thinning of the cervix. This helps the cervix prepare for a vaginal delivery.

During the later stages of pregnancy, the fetus’s head drops into the pelvis, pushing it against the cervix. This process stretches the cervix, causing it to thin and shorten.

Measurement of effacement is usually in percentages. For example, when the cervix is 100% effaced, it means that it is completely thinned and shortened.

An alternative is to measure the length in cm. As the cervix effaces, it becomes shorter.

How effacement relates to dilation

As well as needing to thin and shorten, the cervix also needs to open up, or dilate, to prepare for vaginal delivery.

When the cervix opens up by 10 cm, doctors consider it considered “fully dilated.”

Full dilation and 100% effacement both need to occur for the fetus to be able to pass through the birth canal. The process of dilation and effacement is called cervical ripening. 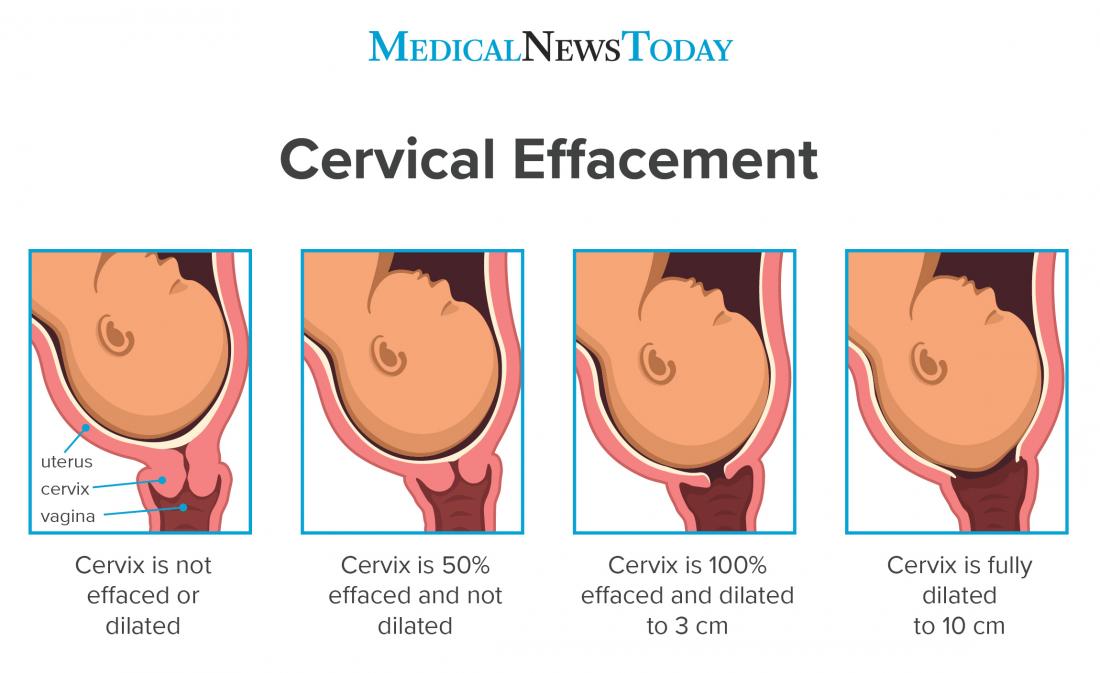 Passing of the mucus plug

During pregnancy, the mucus plug seals the opening of the cervix. This prevents bacteria from entering the uterus.

Cervical changes, including dilation and effacement, cause movement or loss of the mucus plug. However, not all pregnant women will notice this.

As effacement nears, tiny blood vessels near the cervix may rupture. This can cause a small amount of spotting known as bloody show.

This may occur with loss of the mucus plug or on its own.

Cervical effacement often occurs after the head of the fetus drops lower into the pelvis. This may cause pain, as the head puts pressure on the woman’s pelvic ligaments.

The pain may vary. For example, it may cause a dull ache or intermittent sharp pain. However, some women may not feel any discomfort at all.

Contractions involve the tightening and relaxing of the uterus to help cervical dilation and effacement.

Contractions can vary in severity and frequency. Usually, the more regular, frequent, and strong they are, the closer the woman is to delivery.

Braxton–Hicks contractions may occur during the second or third trimester of pregnancy. These are known as false labor, as they do not lead to delivery.

A healthcare professional often performs a pelvic exam to measure cervical effacement. Wearing a surgical glove, they will insert two fingers into the vagina and feel for dilation, effacement, and the position of the cervix.

Pregnant women can check their own cervix, but if they are not familiar with how it felt before pregnancy, it may be difficult to recognize the changes. A self-check of the cervix is not a substitute for a cervical exam by a healthcare professional, however.

In some cases, a doctor may recommend a transvaginal ultrasound to measure cervical thickness and length, as this method is likely more accurate.

The same applies to dilation. It is not uncommon for a woman to be 1–2 cm dilated a couple of weeks before going into labor.

Although they may occur at different speeds, cervical effacement and dilation can go hand in hand. A study in the American Journal of Obstetrics & Gynecology involved 7,407 pregnant women.

The researchers analyzed how fast effacement occurred in relation to dilation. The results indicated that by 8 cm dilated, 95% of the women had complete cervical effacement.

Cervical effacement can start a few weeks before labor. Once a woman’s cervix is fully effaced, delivery is likely to be close.

The length and thickness of the cervix at different stages of pregnancy can also provide useful insight for healthcare providers.

For example, the length of the cervix at mid-pregnancy may give a clue as to pregnancy duration. A pregnancy longer than 41 weeks can raise the risk of complications for both the woman and the fetus.

Assessing which women have a high risk of a prolonged pregnancy allows healthcare providers to determine the necessity of labor induction.

Cervical effacement refers to the stretching, thinning, and shortening of the cervix in preparation for vaginal childbirth.

Along with effacement, cervical dilation must also occur to allow vaginal delivery. Typically, healthcare providers measure effacement in percentages or by the length of the cervix that remains.

Symptoms such as the loss of the mucus plug and pelvic pain may indicate that cervical effacement has begun. The rate of complete effacement varies from woman to woman.