What to know about psoriasis

Psoriasis is an autoimmune condition that causes cells to develop rapidly on the skin. This overgrowth can lead to thick, scaly plaques that may itch or cause discomfort.

There are several different types of psoriasis that vary, depending on the appearance of the scales and their location on the body. In the United States, over 8 million people have psoriasis.

Environmental triggers often cause symptoms of psoriasis to flare. While a person cannot cure these symptoms, recent developments in psoriasis treatment mean that they can reduce the number of flares, and their severity.

In this article, we explain the different psoriasis types, their symptoms, and how to treat them.

The main symptoms of psoriasis are red, flaky, crusty patches, that may have easily-shed, silvery scales covering them. They are also likely to cause an intense itching or burning sensation.

Symptoms of psoriasis develop in flares that occur for different lengths of time with periods of remission in between when they clear up. Remission periods last for an average of 1–12 months at a time.

The duration of both flares and periods of remission can be challenging to predict, however.

Symptoms range from mild to severe and may present differently, according to the type of psoriasis.

According to the National Psoriasis Foundation:

Plaques might develop anywhere but commonly occur as small patches on the elbows, knees, lower back, and scalp.

There are several forms of psoriasis, as described below.

About 80–90% of people with psoriasis have plaque psoriasis. It usually shows as raised, inflamed, red lesions, covered by silvery, white scales, most often on the elbows, knees, scalp, and lower back.

Inverse psoriasis has red lesions, usually without the scales that occur in plaque psoriasis. The lesions might be smooth and shiny.

Irritation from rubbing and sweating can make this type of psoriasis worse due to its location in skin folds and tender areas. It is more common in people who are overweight and those with deep skin folds.

Erythrodermic psoriasis is a particularly inflammatory but rare type that can cause large areas of fiery redness across the surface of the body.

People with unstable plaque psoriasis, where lesions do not have clearly defined edges, may develop erythrodermic psoriasis. There may also be exfoliation, or peeling of the skin, severe itching, and pain.

Erythrodermic psoriasis disrupts the body's chemical balance. This interference may cause protein and fluid loss that can lead to severe illness.

Edema, or swelling from fluid retention, may also occur. This complication is likely to develop around the ankles. The body may have difficulty regulating its temperature, which can cause shivering.

The complications of erythrodermic psoriasis can be dangerous. Anyone who shows symptoms of this condition should see a doctor right away.

People with erythrodermic psoriasis may spend time in the hospital if symptoms are severe.

Guttate psoriasis often starts in childhood or young adulthood. It appears as small, red, individual spots on the skin. The spots are not usually as thick or as crusty as the lesions in plaque psoriasis.

A range of conditions can trigger guttate psoriasis, including:

Guttate psoriasis may resolve without treatment and never return. However, it may clear and reappear later as patches of plaque psoriasis.p

Pustular psoriasis affects adults more than children, and it accounts for fewer than 5% of psoriasis cases.

It appears as white pustules, or blisters of noninfectious pus, which red skin surrounds. It can affect certain areas of the body, for example, the hands and feet, or most of the body. It is not an infection, and it is not contagious.

Pustular psoriasis tends to have a cycle, in which the formation of pustules and scaling follows reddening of the skin.

While psoriasis can form anywhere on the human body, below are some of the most common areas. 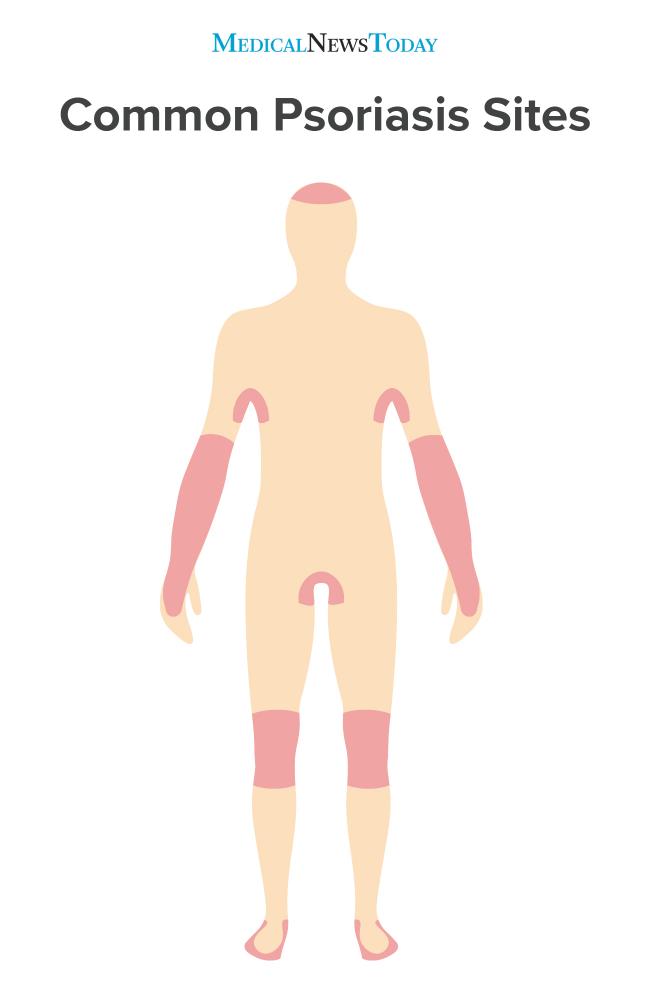 Other health problems may develop as a result of psoriasis. While some people think of it as a skin disease, psoriasis can also affect the bones, the muscles, and the metabolic system.

Up to 30% of people with psoriasis have joint inflammation with symptoms of arthritis, known as psoriatic arthritis.

This type of psoriasis causes inflammation and progressive damage to the joints. It occurs most commonly when people are between 30 and 50 years of age.

Learn more about the symptoms of psoriatic arthritis here.

People with psoriasis may experience social exclusion, image issues, and low self-esteem. Together with the physical discomfort, itching, and pain of psoriasis, this can impact on their overall quality of life.

The social and physical demands of this chronic disease may contribute to depression and anxiety. People with psoriasis have a risk of depression that is twice as high as those who do not have the condition.

Psoriasis might also lead to a higher risk of cardiovascular disease, metabolic syndrome, diabetes, and some types of cancer, including head and neck cancers and digestive tract tumors.

While the cause of psoriasis is still unclear, scientists believe that it is an autoimmune disease.

In people with psoriasis, triggers can lead to their genes instructing the immune system to target the wrong cells. T cells respond to a trigger as if they are fighting an infection or healing a wound. They produce chemicals that cause inflammation.

In psoriasis, this autoimmune activity leads to the excessive growth of skin cells. Typically, skin cells take about 21–28 days to replace themselves. However, in people with psoriasis, they take around 2–6 days.

Triggers will be different in each individual with psoriasis, but common triggers include:

Medications that can trigger a psoriasis flare include:

Some people associate psoriasis with allergies, diet, and weather, but no evidence has yet supported these theories.

Importantly, psoriasis is not contagious. Knowing this can help people with the disease cope with the more challenging parts of socializing.

Some factors increase the risk of a person developing psoriasis.

About 1 in 3 people with a close relative who has psoriasis will also develop the condition. If one parent has psoriasis, there is a 10% chance that their child will go on to develop the disease. This risk increases to 50% if both parents have psoriasis.

This correlation in families suggests an underlying genetic component. However, symptoms of the disease may not show unless an environmental factor triggers it to become active. At least 10% of the population may have the gene that causes psoriasis, but only 2–3% of people develop it.

Psoriasis is equally common in males and females. It can begin at any age, but it is most common between 15–35 years. The average time of onset is 28 years of age.

Around 10–15% of people with psoriasis develop the condition before they are 10 years of age.

Find out more about the triggers and risk factors for psoriatic flare-ups.

There are no blood tests that can confirm psoriasis.

A person who has a persistent rash that does not resolve with over-the-counter (OTC) remedies may want to talk to a doctor about psoriasis. Often, recognizing and treating symptoms early on improves the long-term outcomes of psoriasis.

A doctor will examine the symptoms and ask about personal and family history. They might also carry out a skin biopsy to rule out other conditions, such as eczema.

If a doctor confirms psoriasis, treatment will depend on the type and severity of the condition. The main options include medications and phototherapy.

People with psoriasis should use emollients to keep the skin moisturized when taking other treatments. This precaution can help reduce the itching and irritation and may reduce the number of lesions or plaques that develop.

A range of topical, oral, and injected medications is available for people with psoriasis.

Some OTC remedies can help relieve the symptoms of very mild psoriasis. These include:

People apply topical treatments directly to the skin. It is usually the first-line treatment for mild-to-moderate symptoms that aims to slow down the growth of skin cells, reduce inflammation, and soothe itching or discomfort.

These treatments are available over the counter or on prescription and include nonsteroids and steroids.

Systemic therapies work through the whole-body system, and doctors prescribe them for people who have moderate-to-severe psoriasis and psoriatic arthritis. They reduce disease progression and the regularity of flares.

Biologics: These are protein-based drugs that derive from living cells. Biologics target the T cells and immune proteins that cause psoriasis and psoriatic arthritis.

The U.S. Food and Drug Administration (FDA) have approved at least 10 biologics. These include etanercept, infliximab, and adalimumab.

Biologics are effective, and their benefits far outweigh their risks.

However, people should consider costs when seeking biologic treatment, and it is sensible to speak to an insurance provider about potential coverage.

Methotrexate: Doctors prescribe this for extremely severe psoriasis that restricts daily function and does not respond to any other treatments. Methotrexate is effective for psoriatic arthritis, as well as erythrodermic, palmoplantar, and nail psoriasis.

Cyclosporine: Doctors usually prescribe this for preventing the rejection of organs after transplants. However, it can also help people with severe presentations of the following types of psoriasis:

Oral retinoids: People with severe psoriasis can take a drug called acitretin that works against the effects of the disease throughout the body. It does not reduce immune activity, making acitretin safer for people with HIV who also have severe psoriasis.

People with all types psoriasis except inverse psoriasis may benefit from oral retinoids.

Doctors may prescribe certain off-label medications if the standard, FDA-approved drugs have not resolved symptoms, or if the individual has another condition that prevents the use of specific medications.

Effective off-label options for psoriasis include:

People can carry out phototherapy at home using a lightbox or handheld device if their initial treatment is successful.

Some people may need to take psoralen pills before exposure to make their skin more sensitive to light.

Anyone who has co-existing conditions that make them sensitive to light, such as lupus or previous instances of skin cancer, should not use phototherapy.

It is not possible to avoid psoriasis flares, but some strategies can help reduce the risk of a flare occurring.

Home remedies for reducing itching include:

While psoriasis can be isolating and uncomfortable, people have many options for managing symptoms and treating the immune activity of the disease.

Learn about some more home remedies for psoriasis here:

Is psoriasis similar to eczema? How do I know the difference?

In their early stages, eczema and psoriasis may appear to be similar with each appearing to be red, inflamed areas of skin that itch.

Over time, it will become quite apparent which type of condition you have, as psoriasis will present in specific areas, such as the elbows and knees, as well as develop silvery scales. Eczema tends to become inflamed due to an irritant and will not develop the silvery scales typical of psoriasis plaques.

In either case, people should find a dermatologist for diagnosis and treatment as the emotional toll of the itching, sleeplessness, and appearance may not only affect your daily life but may also make the condition worse.

Answers represent the opinions of our medical experts. All content is strictly informational and should not be considered medical advice.
Medically reviewed by Debra Sullivan, Ph.D., MSN, R.N., CNE, COI on July 5, 2019 — Written by Adam Felman