Everything you need to know about the Pap smear

Cervical cancer is a type of cancer that develops in the cells in the lower part of the uterus. This region is called the cervix.

The cervix is small and narrow, and it connects the uterus to the vagina. It provides an entry for sperm to pass into the uterus. The cervix also provides an exit from the uterus for monthly menstrual blood flow or a baby during delivery.

There are two parts to the cervix, and two different types of cells occur there:

Endocervix: This is the innermost part of the cervix. It lines the “tunnel” leading from the uterus into the vagina. It contains tall, column-like cells that are responsible for mucus secretion.

Ectocervix: This is the outer portion of the cervix, and it protrudes into the vagina. The ectocervix is home to squamous cells, which resemble fish scales under the microscope.

Where these two cell types meet is where and precancerous cells form.

What is a Pap smear?

A Pap smear is a screening tool that can help doctors detect abnormal cells and cancer. It works by sampling cells from the cervix.

This information can help a doctor determine whether a person has cervical cancer, or if they have an increased risk of developing this disease.

These tests can detect:

If the tests lead to a diagnosis, a person can then seek treatment.

According to the American Cancer Society (ACS), deaths from cervical cancer dramatically after the introduction of the Pap smear.

What happens during a Pap smear? 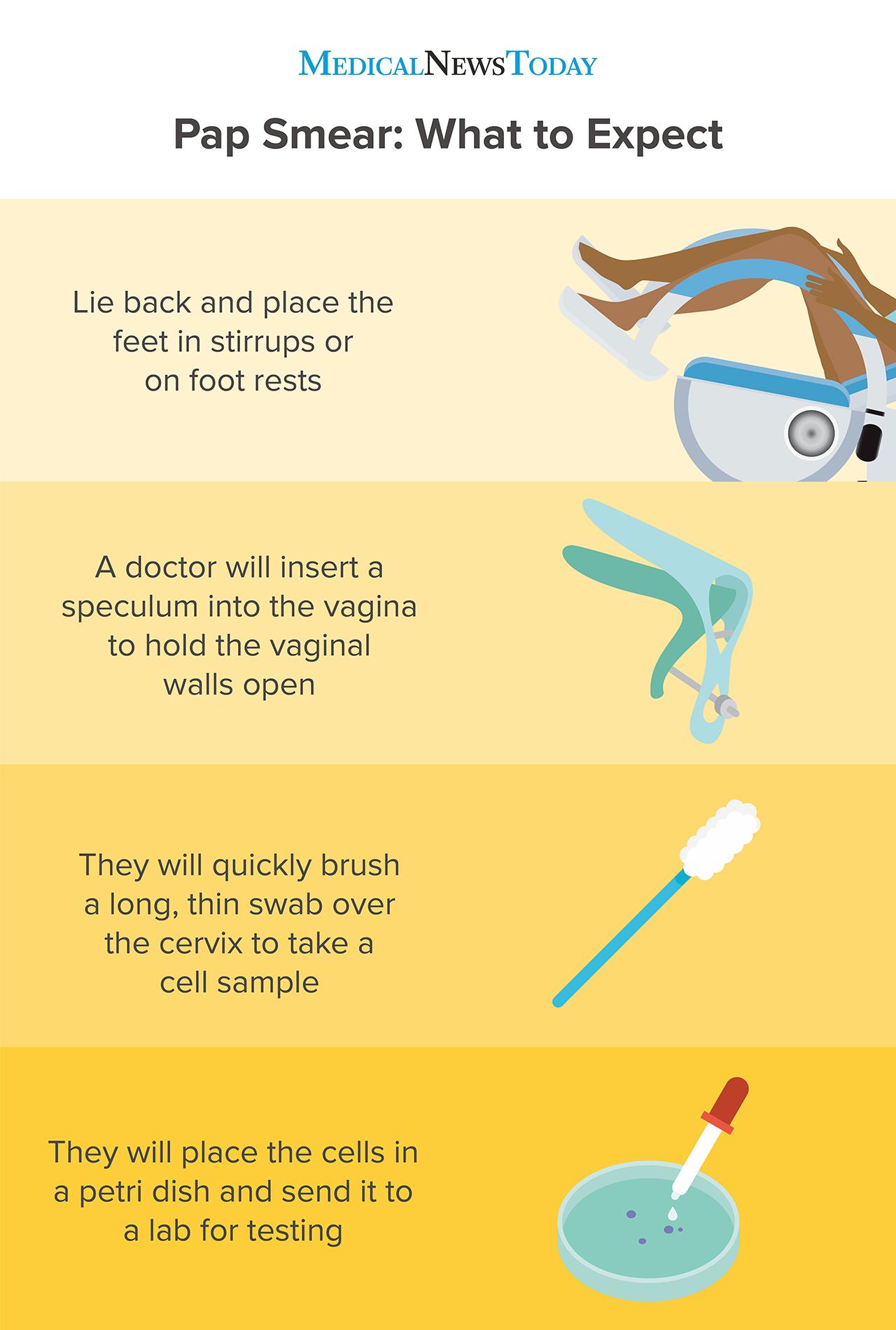 A doctor usually carries out a Pap smear during a gynecological pelvic exam. They insert a tool called a speculum into the vagina so that they can examine the cervix. Then, they take a sample of cervical cells using a brush or spatula and send them for testing.

If possible, it is best to avoid having a Pap smear during a menstrual period, especially if the flow is heavy, as this can affect the results of the test. However, if a person only has the chance to have the test during menstruation, it is still better to attend than not.

A person should not douche or put anything in the vagina to clean it before the test. Doctors do not recommend douching at any time.

When should I have a Pap smear?

Recommendations on Pap smear frequency depend on several factors.

The American Cancer Society that people between the ages of 25 and 65 should have an HPV test every five years.

After the age of 65 years, most women will not need a Pap smear or HPV test. However, each person’s risk factors vary.

Those who have had abnormal test results in the past and those who are sexually active with more than one partner may need more frequent testing.

After a total hysterectomy, which is the surgical removal of the uterus and cervix, a Pap smear will no longer be necessary.

Anyone who has a hysterectomy because they had cancerous or precancerous cells should continue to have regular tests.

Everyone has different needs, so it is important that people speak to their doctor about their risk factors for developing cervical cancer and their need for screening.

The test results usually take 1–3 weeks to come back. Most test results are negative, but they can sometimes be positive. A positive result does not confirm that a person has cancer, but it indicates that more investigation is necessary.

In most Pap smears, the result is normal and does not reveal any abnormal cells.

Sometimes the result is ambiguous. The doctor may ask the person to have more tests to monitor for any changes. These additional tests are likely to take place either soon after the first test or about 6 months later.

Sometimes the result is “abnormal.” The doctor may recommend more tests straight away or after 6 months depending on the extent of the cell changes.

Atypical squamous cells of undetermined significance (ASCUS): These are mildly abnormal cells that do not meet the criteria for precancerous cells. If HPV is present, the doctor may recommend additional testing.

A doctor will usually recommend following up with a colposcopy, with or without a biopsy.

During a colposcopy, the doctor uses a colposcope to magnify the view of the cervix, vulva, and vagina for examination. They may take a biopsy sample for evaluation in a laboratory.

They are divided into two categories:

What does an abnormal result mean?

It is possible to classify the cell changes as follows:

Atypical glandular cells: There are abnormal cells in the endocervix that will need further testing.

Squamous cell cancer or adenocarcinoma: There is a likelihood of cancer, depending on the type of cell that is atypical. Further testing is necessary.

In 2019, the ACS estimate that there will be new diagnoses of invasive cervical cancer in the United States and approximately 4,250 deaths.

Screening and other types of prevention can reduce this risk dramatically.

There are often no symptoms until the later stages, when there bleeding or discharge from the vagina. This is why it is important to attend screening.

Doctors also do not recommend douching, as this can increase the likelihood of exposing the vagina to bacterial infection.

What is human papillomavirus?

Other types can lead to different complications, such as noncancerous warts or papillomas.

There is no cure, but the infection often resolves in time. However, if HPV becomes a long-term infection, the risk of cancer increases.

Treatment is available for HPV-related warts and cell changes.

Vaccination is available to protect against HPV infection. Until recently, the Centers for Disease Control and Prevention (CDC) have recommended that young women have the vaccine up to the age of 26 years and young men up to 21 years.

In 2018, however, the recommended a form of the vaccine called Gardasil 9, which protects against HPV, for men and women aged 27–45 years.

Cervical cancer is a type of cancer that develops in the cervix. Before developing into cancer, cervical cells undergo abnormal changes that a Pap test can detect.

With early diagnosis and appropriate treatment, the chances of surviving cervical cancer are good.

The note that cervical cancer is the “easiest gynelogical cancer to prevent,” as long as a person attends screening sessions and has the HPV vaccination.