New research suggests a surprising degree of similarity in the organization of regions of the brain that control language and complex thought processes in humans and monkeys. The study, published online January 28 in the Cell Press journal Neuron, also revealed some key differences. The findings may provide valuable insights into the evolutionary processes that established our ties to other primates but also made us distinctly human.

The research concerns the ventrolateral frontal cortex, a region of the brain known for more than 150 years to be important for cognitive processes including language, cognitive flexibility, and decision-making. "It has been argued that to develop these abilities, humans had to evolve a completely new neural apparatus; however others have suggested precursors to these specialized brain systems might have existed in other primates," explains lead author Dr. Franz-Xaver Neubert of the University of Oxford, in the UK.

By using non-invasive MRI techniques in 25 people and 25 macaques, Dr. Neubert and his team compared ventrolateral frontal cortex connectivity and architecture in humans and monkeys. The investigators were surprised to find many similarities in the connectivity of these regions. This suggests that some uniquely human cognitive traits may rely on an evolutionarily conserved neural apparatus that initially supported different functions. Additional research may reveal how slight changes in connectivity accompanied or facilitated the development of distinctly human abilities.

The researchers also noted some key differences between monkeys and humans. For example, ventrolateral frontal cortex circuits in the two species differ in the way that they interact with brain areas involved with hearing.

"This could explain why monkeys perform very poorly in some auditory tasks and might suggest that we humans use auditory information in a different way when making decisions and selecting actions," says Dr. Neubert.

A region in the human ventrolateral frontal cortex - called the lateral frontal pole - does not seem to have an equivalent area in the monkey. This area is involved with strategic planning, decision-making, and multi-tasking abilities.

"This might relate to humans being particularly proficient in tasks that require strategic planning and decision making as well as 'multi-tasking'", says Dr. Neubert.

Interestingly, some of the ventrolateral frontal cortex regions that were similar in humans and monkeys are thought to play roles in psychiatric disorders such as attention deficit hyperactivity disorder, obsessive compulsive disorder, and substance abuse. A better understanding of the networks that are altered in these disorders might lead to therapeutic insights. 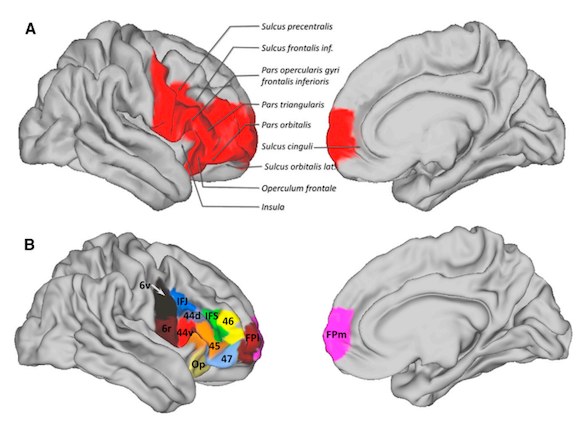 (A) The right vlFC ROI. Dorsally it included the inferior frontal sulcus and, more posteriorly, it included PMv; anteriorly it was bound by the paracingulate sulcus and ventrally by the lateral orbital sulcus and the border between the dorsal insula and the opercular cortex.
(B) A schematic depiction of the result of the 12 cluster parcellation solution using an iterative parcellation approach. We subdivided PMv into ventral and dorsal regions (6v and 6r, purple and black). We delineated the IFJ area (blue) and areas 44d (gray) and 44v (red) in lateral pars opercularis. More anteriorly, we delineated areas 45 (orange) in the pars triangularis and adjacent operculum and IFS (green) in the inferior frontal sulcus and dorsal pars triangularis. We found area 12/47 in the pars orbitalis (light blue) and area Op (bright yellow) in the deep frontal operculum. We also identified area 46 (yellow), and lateral and medial frontal pole regions (FPl and FPm, ruby colored and pink).
Image credit: Neuron, Neubert et al.
Written by on Invalid date