In healthy mouths good fungi keep bad ones in check

Written by undefined on Invalid date

Human mouths contain a balanced mix of microbes which, when disrupted, can lead to oral diseases. A study published on March 13th in PLOS Pathogens compares the bacteria and fungi present in the mouths of healthy individuals with those from patients infected with HIV, and illustrates why oral candidiasis (aka "thrush") is a common complication of HIV infection.

Using high-throughput gene sequencing, Mahmoud Ghannoum, from Case Western Reserve University in Cleveland, USA, and colleagues catalogued the core oral bacteriome (the bacteria commonly present) and the core oral mycobiome (the fungi commonly present). They found little difference in the bacteria between healthy individuals and those infected with HIV (whose immune systems are compromised). In contrast, they saw clear and consistent differences in the oral fungi between both groups.

A family of fungi called Candida was predominant in both groups, but present at higher levels in HIV-infected individuals. A second one, called Pichia, was present at fairly high levels in the mouths of healthy individuals but only at lower levels in people who were infected with HIV. This led the researchers to speculate that there was an antagonism between the two. And indeed, when they grew Pichia alone in a liquid medium and then filtered the fungus out, the "Pichia spent medium" (or PSM) was able to suppress the growth of Candida as well as several other disease-causing fungi.

Oral candidiasis is a common opportunistic infection in patients with HIV/AIDS, and even in the era of effective antiretroviral therapy, it compromises the quality of life of many patients. Making use of a mouse model of oral candidiasis, the researchers were able to show that mice treated with PSM had much less severe symptoms compared with untreated ones. Therefore, at least in this animal model, Pichia's antagonism of Candida can suppress oral candidiasis.

The authors say, "Our findings have wide implications regarding the discovery of novel antifungal agents and will open the way to new therapeutic approaches for the management of fungal infections". They continue , "Detailed investigations are warranted to purify and characterize the specific Pichia factor(s) that can inhibit Candida and other disease-causing fungi." 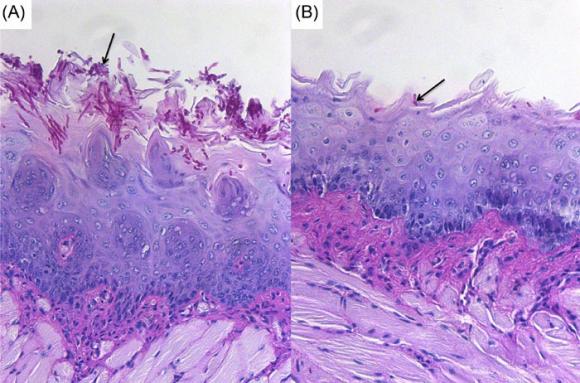 Treatment of mice with Pichia spent medium reduces the extent of tissue invasion by Candida (see arrows) in the tongue. This image shows (A) untreated and (B) Pichia spent medium treated mice tissue.
Image credit: Mahmoud Ghannoum
Written by undefined on Invalid date