Colorectal cancer: What you need to know

The American Cancer Society estimate that about 1 in 21 men and 1 in 23 women in the United States will develop colorectal cancer during their lifetime.

It is the second leading cause of cancer death in women, and the third for men. However, due to advances in screening techniques and improvements in treatments, the death rate from colorectal cancer has been falling.

Colorectal cancer may be benign, or non-cancerous, or malignant. A malignant cancer can spread to other parts of the body and damage them.

Symptoms of colorectal cancer include:

Most of these symptoms may also indicate other possible conditions. It is important to see a doctor if symptoms persist for 4 weeks or more.

Treatment will depend on several factors, including the size, location, and stage of the cancer, whether or not it is recurrent, and the current overall state of health of the patient.

This is the most common treatment. The affected malignant tumors and any nearby lymph nodes will be removed, to reduce the risk of the cancer spreading.

The bowel is usually sewn back together, but sometimes the rectum is removed completely and a colostomy bag is attached for drainage. The colostomy bag collects stools. This is usually a temporary measure, but it may be permanent if it is not possible to join up the ends of the bowel.

If the cancer is diagnosed early enough, surgery may successfully remove it. If surgery does not stop the cancer, it will ease the symptoms.

Chemotherapy involves using a medicine or chemical to destroy the cancerous cells. It is commonly used for colon cancer treatment. Before surgery, it may help shrink the tumor.

Targeted therapy is a kind of chemotherapy that specifically targets the proteins that encourage the development of some cancers. They may have fewer side effects than other types of chemotherapy. Drugs that may be used for colorectal cancer include bevacizumab (Avastin) and ramucirumab (Cyramza).

A study has found that patients with advanced colon cancer who receive chemotherapy and who have a family history of colorectal cancer have a significantly lower likelihood of cancer recurrence and death.

Radiation therapy uses high energy radiation beams to destroy the cancer cells and to prevent them from multiplying. This is more commonly used for rectal cancer treatment. It may be used before surgery in an attempt to shrink the tumor.

Both radiation therapy and chemotherapy may be given after surgery to help lower the chances of recurrence.

Ablation can destroy a tumor without removing it. It can be carried out using radiofrequency, ethanol, or cryosurgery. These are delivered using a probe or needle that is guided by ultrasound or CT scanning technology.

Malignant tumors can spread to other parts of the body if left untreated. The chances of a complete cure depend enormously on how early the cancer is diagnosed and treated.

A patient’s recovery depends on the following factors:

In some cases, the cancer may return.

Most colon cancers develop within polyps (adenoma). These are often found inside the bowel wall.

Eating red or processed meats may increase the risk

People who have a tumor suppressor gene known as Sprouty2 may have a higher risk of some colorectal cancers.

According to WHO (World Health Organization) colorectal cancer is the second most common tumor among both men and women, after lung tumors.

Around 2 percent of people aged over 50 years will eventually develop colorectal cancer in Western Europe.

Colorectal cancer tends to affect men and women equally. However, men tend to develop it at a younger age.

It is not clear exactly why colorectal cancer develops in some people and not in others.

The stage of a cancer defines how far it has spread. Determining the stage helps chose the most appropriate treatment. 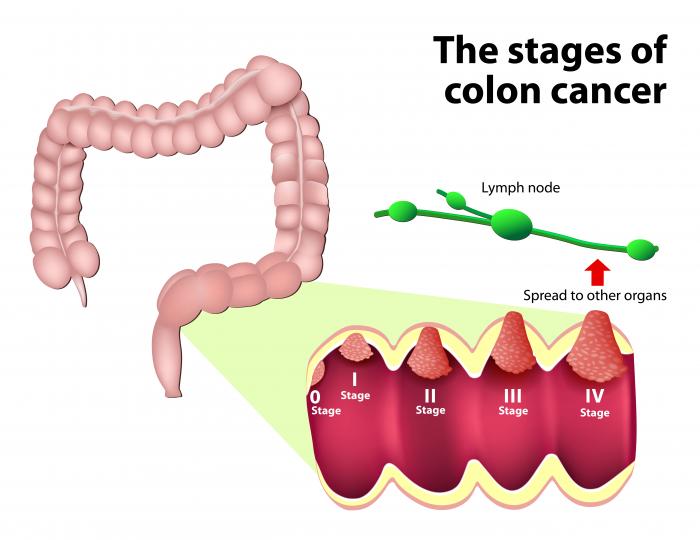 A commonly used system gives the stages a number from 0 to 4. The stages of colon cancer are:

In 40 percent of cases, diagnosis occurs at an advanced stage, when surgery is likely the best option.

Screening can detect polyps before they become cancerous, as well as detecting colon cancer during its early stages when the chances of a cure are much higher.

The following are the most common for colorectal cancer.

A blood stool test is not 100-percent accurate, because not all cancers cause a loss of blood, or they may not bleed all the time. Therefore, this test can give a false negative result. Blood may also be present because of other illnesses or conditions, such as hemorrhoids. Some foods may suggest blood in the colon, when in fact, none was present.

This test analyzes several DNA markers that colon cancers or precancerous polyps cells shed into the stool. Patients may be given a kit with instructions on how to collect a stool sample at home. This has to be brought back to the doctor’s office. It is then sent to a laboratory.

This test is more accurate for detecting colon cancer than polyps, but it cannot detect all DNA mutations that indicate that a tumor is present.

The doctor uses a sigmoidoscope, a flexible, slender and lighted tube, to examine the patient’s rectum and sigmoid. The sigmoid colon is the last part of the colon, before the rectum.

The test takes a few minutes and is not painful, but it might be uncomfortable. There is a small risk of perforation of the colon wall.

If the doctor detects polyps or colon cancer, a colonoscopy can then be used to examine the entire colon and take out any polyps that are present. These will be examined under a microscope.

A sigmoidoscopy will only detect polyps or cancer in the end third of the colon and the rectum. It will not detect a problem in any other part of the digestive tract.

Barium is a contrast dye that is placed into the patient’s bowel in an enema form, and it shows up on an X-ray. In a double-contrast barium enema, air is added as well.

The barium fills and coats the lining of the bowel, creating a clear image of the rectum, colon, and occasionally of a small part of the patient’s small intestine.

A colonoscope is longer than a sigmoidoscope. It is a long, flexible, slender tube, attached to a video camera and monitor. The doctor can see the whole of the colon and rectum. Any polyps discovered during this exam can be removed during the procedure, and sometimes tissue samples, or biopsies, are taken instead.

A colonoscopy is painless, but some patients are given a mild sedative to calm them down. Before the exam, they may be given laxative fluid to clean out the colon. An enema is rarely used. Bleeding and perforation of the colon wall are possible complications, but extremely rare.

A CT machine takes images of the colon, after clearing the colon. If anything abnormal is detected, conventional colonoscopy may be necessary. This procedure may offer patients at increased risk of colorectal cancer an alternative to colonoscopy that is less-invasive, better-tolerated, and with good diagnostic accuracy.

Ultrasound or MRI scans can help show if the cancer has spread to another part of the body.

The Centers for Disease Control and Prevention (CDC) regular screening for those aged 50 to 75 years. The frequency depends on the type of test.

A number of lifestyle measures may reduce the risk of developing colorectal cancer:

A study published in the journal Cell has suggested that aspirin in boosting the immune system in patients suffering from breast, skin and bowel cancer.

A gene linked to bowel cancer recurrence and shortened survival could help predict outcomes for patients with the gene – and take scientists a step closer to development of personalized treatments, reveals research in the journal Gut.

A study published in Science found that 300 oranges’ worth of vitamin C impairs cancer cells, suggesting that the power of vitamin C could one day be harnessed to fight colorectal cancer

Researchers have found that drinking coffee every day – even decaffeinated coffee – may lower the risk of colorectal cancer.