Infertility in men and women

Infertility happens when a couple cannot conceive after having regular unprotected sex.

It may be that one partner cannot contribute to conception, or that a woman is unable to carry a pregnancy to full term. It is often defined as not conceiving after 12 months of regular sexual intercourse without the use of birth control.

In the United States, around 10 percent of women aged 15 to 44 years are estimated to have difficulty conceiving or staying pregnant. Worldwide, 8 to 12 percent of couples experience fertility problems. Between 45 and 50 percent of cases are thought to stem from factors that affect the man.

The following are common causes of infertility in men.

Semen is the milky fluid that a man’s penis releases during orgasm. Semen consists of fluid and sperm. The fluid comes from the prostate gland, the seminal vesicle, and other sex glands.

The sperm is produced in the testicles.

When a man ejaculates and releases semen through the penis, the seminal fluid, or semen, helps transport the sperm toward the egg.

The following problems are possible:

If the sperm do not have the right shape, or they cannot travel rapidly and accurately towards the egg, conception may be difficult. Up to 2 percent of men are thought to have suboptimal sperm.

Abnormal semen may not be able to carry the sperm effectively.

This can result from:

Other causes may include:

Some medications increase the risk of fertility problems in men.

Laboratory studies have suggested that long-term acetaminophen use during pregnancy may affect fertility in males by lowering testosterone production. Women are advised not to use the drug for more than one day.

Infertility in women can also have a range of causes.

Risk factors that increase the risk include:

Some medical conditions can affect fertility.

Ovulation disorders appear to be the most common cause of infertility in women.

Ovulation is the monthly release of an egg. The eggs may never be released or they may only be released in some cycles.

Ovulation disorders can be due to:

Problems in the uterus or fallopian tubes can prevent the egg from traveling from the ovary to the uterus, or womb.

If the egg does not travel, it can be harder to conceive naturally.

Some drugs can affect fertility in a woman.

One study has found that high cholesterol levels may have an impact on fertility in women.

Treatment will depend on many factors, including the age of the person who wishes to conceive, how long the infertility has lasted, personal preferences, and their general state of health.

The couple may be advised to have sexual intercourse more often around the time of ovulation. Sperm can survive inside the female for up to 5 days, while an egg can be fertilized for up to 1 day after ovulation. In theory, it is possible to conceive on any of these 6 days that occur before and during ovulation.

However, a survey has suggested that the 3 days most likely to offer a fertile window are the 2 days before ovulation plus the 1 day of ovulation.

Some suggest that the number of times a couple has intercourse should be reduced to increase sperm supply, but this is unlikely to make a difference.

Treatment will depend on the underlying cause of the infertility.

Fertility drugs might be prescribed to regulate or induce ovulation.

Reducing the risk of multiple pregnancies

Careful monitoring during treatment and pregnancy can help reduce the risk of complications. The more fetuses there are, the higher the risk of premature labor.

If a woman needs an HCG injection to activate ovulation and ultrasound scans show that too many follicles have developed, it is possible to withhold the HCG injection. Couples may decide to go ahead regardless if the desire to become pregnant is very strong.

If too many embryos develop, one or more can be removed. Couples will have to consider the ethical and emotional aspects of this procedure.

If the fallopian tubes are blocked or scarred, surgical repair may make it easier for eggs to pass through.

Endometriosis may be treated through laparoscopic surgery. A small incision is made in the abdomen, and a thin, flexible microscope with a light at the end, called a laparoscope, is inserted through it. The surgeon can remove implants and scar tissue, and this may reduce pain and aid fertility.

The following methods are currently available for assisted conception.

Intrauterine insemination (IUI): At the time of ovulation, a fine catheter is inserted through the cervix into the uterus to place a sperm sample directly into the uterus. The sperm is washed in a fluid and the best specimens are selected.

The woman may be given a low dose of ovary stimulating hormones.

IUI is more commonly done when the man has a low sperm count, decreased sperm motility, or when infertility does not have an identifiable cause. It can also help if a man has severe erectile dysfunction.

In-vitro fertilization (IVF): Sperm are placed with unfertilized eggs in a petri dish, where fertilization can take place. The embryo is then placed in the uterus to begin a pregnancy. Sometimes the embryo is frozen for future use.

Intracytoplasmic sperm injection (ICSI): A single sperm is injected into an egg to achieve fertilization during an IVF procedure. The likelihood of fertilization improves significantly for men with low sperm concentrations.

Sperm or egg donation: If necessary, sperm or eggs can be received from a donor. Fertility treatment with donor eggs is usually done using IVF.

Assisted hatching: The embryologist opens a small hole in the outer membrane of the embryo, known as the zona pellucid. The opening improves the ability of the embryo to implant into the uterine lining. This improves the chances that the embryo will implant at, or attach to, the wall of the uterus.

This may be used if IVF has not been effective, if there has been poor embryo growth rate, and if the woman is older. In some women, and especially with age, the membrane becomes harder. This can make it difficult for the embryo to implant.

Surgical sperm aspiration: The sperm is removed from part of the male reproductive tract, such as the vas deferens, testicle, or epididymis.

Infertility can be primary or secondary.

Secondary infertility is when they have previously conceived but are no longer able to.

Most people will visit a physician if there is no pregnancy after 12 months of trying.

If the woman is aged over 35 years, the couple may wish to see a doctor earlier, because fertility testing can take time, and female fertility starts to drop when a woman is in her 30s. 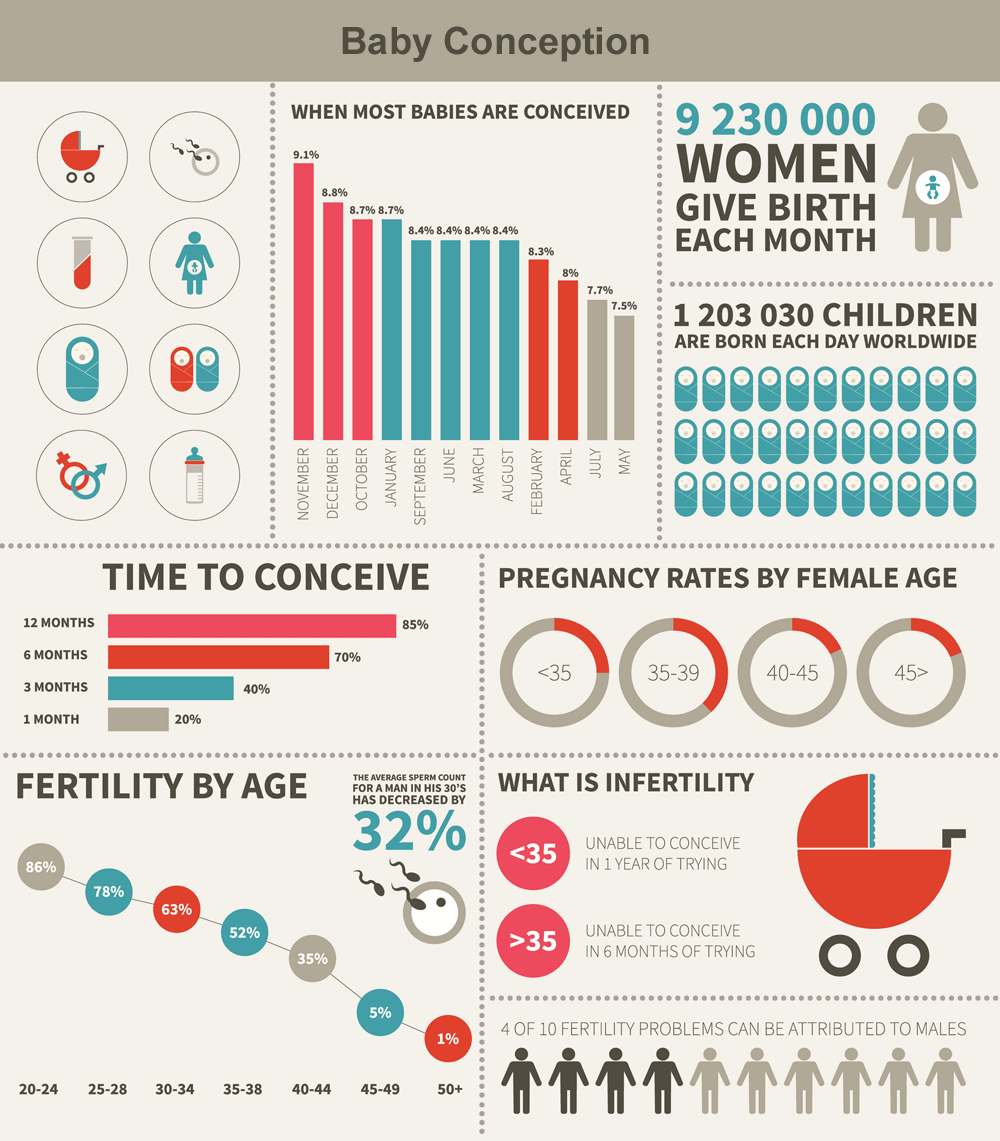 Some facts about conception and fertility

A doctor can give advice and carry out some preliminary assessments. It is better for a couple to see the doctor together.

The doctor may ask about the couple’s sexual habits and make recommendations regarding these. Tests and trials are available, but testing does not always reveal a specific cause.

The doctor will ask the man about his medical history, medications, and sexual habits and carry out a physical examination. The testicles will be checked for lumps or deformities, and the shape and structure of the penis will be examined for abnormalities.

A woman will undergo a general physical examination, and the doctor will ask about her medical history, medications, menstruation cycle, and sexual habits.

She will also undergo a gynecologic examination and a number of tests:

Some complications can result from infertility and its treatment. If conception does not occur after many months or years of trying, it can lead to stress and possibly depression.

Some physical effects may also result from treatment.

The ovaries can swell, leak excess fluid into the body, and produce too many follicles, the small fluid sacs in which an egg develops.

Ovarian hyperstimulation syndrome (OHSS) usually results from taking medications to stimulate the ovaries, such as clomifene and gonadotrophins. It can also develop after IVF.

They are usually mild and easy to treat.

Rarely, a blood clot may develop in an artery or vein, liver or kidney problems can arise, and respiratory distress may develop. In severe cases, OHSS can be fatal.

This is when a fertilized egg implants outside the womb, usually in a fallopian tube. If it stays in there, complications can develop, such as the rupture of the fallopian tube. This pregnancy has no chance of continuing.

Immediate surgery is needed and, sadly, the tube on that side will be lost. However, future pregnancy is possible with the other ovary and tube.

It is impossible to know how long treatment will go on for and how successful it will be. Coping and persevering can be stressful. The emotional toll on both partners can affect their relationship.

Some people find that joining a support group helps, as it offers the chance to talk to others in a similar situation.

It is important to tell a doctor if excessive mental and emotional stress develop. They can often recommend a counselor and others who can offer appropriate support. Online support from organizations such as Resolve can be helpful.

For couples who experience fertility problems and those who wish to have children at an older age, there are more options available than ever before.

In 1978, the first baby was born as a result of IVF. By 2014, over 5 million people had been born after being conceived through IVF.

As new technology becomes available, fertility treatment is now accessible to more people, and success rates and safety are improving all the time.

Financing fertility treatment can also be costly, but there are programs that can help with this.