When surgeons remove tumor tissue they try to leave a “margin” of healthy tissue to ensure all the cancer is removed. Sometimes this means the patient has to remain under general anaesthetic for another 30 minutes or so while tissue samples are sent for analysis to check if the margin is clear. Even then, it is still possible that some cancerous tissue remains, and the patient has to undergo further surgery to remove it.

Now, a new technique based on an “intelligent knife,” called the “iKnife,” promises to remove the need for lab analysis and the accompanying delay, and it also helps avoid repeat surgeries.

The iKnife sniffs the “smoke” created by the electrosurgical removal of cancerous tissue and tells the surgeon almost immediately if the tissue it has come from is healthy or cancerous.

This first study appears online this week in Science Translational Medicine, in which the iKnife is tested in the operating room.

In tissue samples from 91 patients, researchers at Imperial College London using the iKnife achieved 100% accuracy in diagnosing whether the samples were cancerous or not.

Study author Dr. Zoltan Takats is the inventor of the iKnife. Asked if his new surgical tool would be confined to use in only certain types of cancer, he told Medical News Today:

“It is a generally applicable tool, we believe it will be useful for many different types of cancer surgeries.”

On the question of cost-effectiveness, Dr. Takats told us:

“We believe that it will be a cost-saver – due to elimination of intraoperative histology, shorter intervention times and lower rate of re-operations.”

The iKnife is a combination of an established technology called electrosurgery that was invented in the 1920s and a new technology that is still emerging, called rapid evaporative ionization mass spectrometry (REIMS).

In electrosurgery, the surgeon’s knife delivers an electric current that heats the target tissue and cuts through it while causing minimum loss of blood.

The heat from the current vaporizes the tissue, which gives off a smoke that is normally sucked away with an extractor.

The mass spectrometer technology behind REIMS almost instantly identifies the chemicals present in human tissue by analyzing the smoke that is released during electrosurgery.

Cells produce thousands of metabolites in various concentrations, depeding on their cell type. So once the REIMS technology is primed with the profiles of healthy and cancerous cells, it can rapidly use these to screen the sample of smoke and inform the surgeon whether it is from a tumor or healthy tissue. 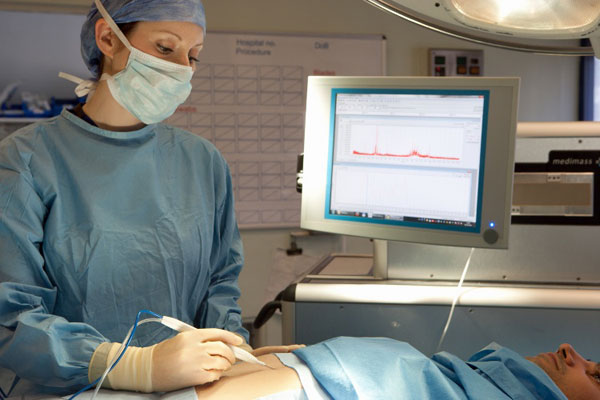 The iKnife device “sniffs” smoke created when cancerous tissue is surgically removed, and it then determines whether the tissue is cancerous or healthy. Photo: Imperial College London

iKnife relies on a library of chemical profiles

In the first stage of the study, the researchers created a reference library of chemical profiles consisting of both healthy and cancerous tissue types for the iKnife. They collected samples from surgery patients, taking note of the characteristics of thousands of cancerous and non-cancerous tissues, including brain, lung, breast, stomach, colon and liver tumors.

In the second stage of the study, the team transferred the technology to the operating room and tested it on 91 patients. In all cases, the iKnife correctly identified the tissue type. The results were confirmed with lab tests on the samples after surgery.

Results delivered in under 3 seconds

By comparing the chemical profile of the tissue it is sampling to the reference library, the iKnife can deliver a result in under 3 seconds, say the researchers.

But for this study, the surgeons carrying out the procedures were not allowed to see the nearly instant readings from the iKnife.

The researchers now hope to run a clinical trial that tests whether giving surgeons access to iKnife readings during operations improves outcomes for patients.

Dr. Takats says in a statement:

“These results provide compelling evidence that the iKnife can be applied in a wide range of cancer surgery procedures.”

As the technology delivers almost instant results, it allows “surgeons to carry out procedures with a level of accuracy that hasn’t been possible before”, he adds, noting that they “believe it has the potential to reduce tumor recurrence rates and enable more patients to survive.”

Other applications: “Is this beef or horsemeat?”

Although this latest study uses the iKnife to test cancerous tissue, Takats says there is no reason why it couldn’t also be used to test for other features, such as whether there is an adequate blood supply, or to identify types of bacteria in the tissue.

Dr. Takats says he has already used the iKnife to distinguish horsemeat from beef.

He first raised the idea of combining electrosurgery with REIMS from real-time identification of tumor tissues in a paper published in 2009.

Funds from the National Institute for Health Research (NIHR) Imperial Biomedical Research Centre, the European Research Council and the Hungarian National Office for Research and Technology helped finance the study.