What causes schizophrenia? This is a question that has challenged scientists since the disorder was first identified almost 130 years ago. Now, for the first time, researchers have shed light on the biological origin of the illness.

In what has been hailed a “breakthrough” in schizophrenia research, scientists from Harvard Medical School, the Broad Institute and Boston Children’s Hospital – all in Massachusetts – have discovered how a gene called complement component 4 (C4) plays a key role in schizophrenia development.

The research team – including senior author Steven McCarroll, associate professor of genetics and director of genetics for the Stanley Center at Harvard – says their findings may aid the development of much-needed new treatments and preventive strategies for schizophrenia.

It is estimated that around 21 million people across the globe have schizophrenia, with symptom onset most common in late adolescence or early adulthood.

The illness was first discovered by German psychiatrist Dr. Emile Kraepelin in 1887, though the term “schizophrenia” was not used until 1910, coined by Swiss psychiatrist Paul Eugen Bleuler. The name came from the Greek words “schizo” (split) and “phren” (mind), fueling the myth that people with schizophrenia have split personalities; this is not the case.

Understanding the genetic roots of schizophrenia

In the years since schizophrenia was discovered, researchers have been working hard to determine the underlying biological mechanisms that cause the illness.

Lack of understanding in this area has hampered the discovery of a cure or preventive strategies for schizophrenia; current treatments – such as antipsychotic medications – can only focus on eliminating symptoms.

Increasingly, researchers have looked at how schizophrenia may be caused by genetic factors, based on the knowledge that the disorder is heritable. In July 2014, the Schizophrenia Working Group of the Psychiatric Genomics Consortium – including investigators from the Stanley Center – identified more than 100 areas of the human genome that are linked to the disorder.

Now, McCarroll and colleagues have built on these findings, identifying a specific gene that appears to have the strongest association with schizophrenia risk. This gene is C4, which is already known to play a key role in the immune system, alerting immune cells to pathogens that need to be destroyed.

For their study, recently published in the journal Nature, the team set out to gain a better understanding of how C4 works in the brain.

McCarroll and his colleague Aswin Sekar, an MD/PhD student at Harvard Medical School, created a novel molecular technique that enabled the team to characterize the structure of the C4 gene in the DNA samples of more than 65,000 individuals, of whom around 29,000 had schizophrenia and 36,000 did not.

The researchers explain that C4 genes have significant variability in their structure, meaning the number of copies and variants of the gene can differ from person to person. This does not normally happen with most other genes, making C4 a gene of interest. 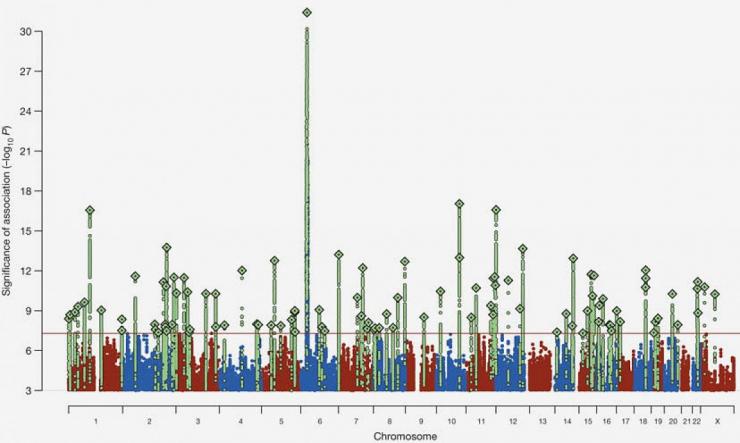 This graph shows the C4 gene on chromosome 6 towering above all other genes that have been linked to schizophrenia, indicating that C4 poses the strongest risk for the disorder.
Image credit: Psychiatric Genomics Consortium

In detail, the researchers found that the more a C4 gene structure led to the expression of the variant C4A in the brain, the greater a person’s risk of schizophrenia.

Next, the team set out to gain a better understanding of how certain C4 gene structures increase the risk of schizophrenia.

The researchers adapted a molecular genetics technique previously used in mouse models to study the “pruning” of synapses – the connections between brain cells, or neurons – and the role of C4 in the immune system.

Using this adapted method to see what role C4 plays in the brains of mice, the researchers found that the gene is key for synaptic pruning – the process by which synapses are streamlined, which normally occurs in late adolescence/early adulthood in humans.

Specifically, the team found that C4 activity was required in order for a protein called C3 to be transferred onto synapses, which acts as a signal that the synapses should be pruned.

Additionally, the researchers found that the greater the C4 activity in the brains of the mice, the more synaptic pruning they experienced during maturation.

The team says their findings may explain why schizophrenia tends to develop in late adolescence or early adulthood; excessive synaptic pruning caused by increased C4 activity at this point in time may trigger symptom onset.

The results may also explain why some people with schizophrenia have a thinner cerebral cortex with fewer synapses. The cerebral cortex is the outer layer of the brain that plays a role in memory, language, intelligence and consciousness.

What is more, the researchers say their findings support the theory that components of the immune system play a developmental role in the brain, rather than just aiding the fight against infection.

“The same proteins are doing one thing in the periphery for immunity, and another thing in the brain,” says McCarroll. “It’s a clever way nature reuses the same molecules for different jobs.”

A ‘crucial turning point in the fight against mental illness’

While the research is in its early days, the findings undoubtedly represent a breakthrough in the understanding of schizophrenia development.

Talking to The Washington Post, Steven Hyman, director of the Stanley Center, hailed the research as “the most significant mechanistic study about schizophrenia ever.”

“I’m a crusty, old, curmudgeonly skeptic,” he added. “But I’m almost giddy about these findings.”

And it is no wonder scientists are so excited; discovering that the C4 gene may play a key role in a person’s risk of schizophrenia may open the door to strategies that prevent the illness.

“This discovery enriches our understanding of the complement system in brain development and in disease, and we could not have made that leap without the genetics,” says study coauthor Beth Stevens, of the Department of Neurology at Boston Children’s Hospital.

“We’re far from having a treatment based on this,” she adds, “but it’s exciting to think that one day we might be able to turn down the pruning process in some individuals and decrease their risk.”

Commenting on the results, Bruce Cuthbert, acting director of the National Institute of Mental Health – which helped fund the study – says:

“This study marks a crucial turning point in the fight against mental illness. Because the molecular origins of psychiatric diseases are little-understood, efforts by pharmaceutical companies to pursue new therapeutics are few and far between.

This study changes the game. Thanks to this genetic breakthrough we can finally see the potential for clinical tests, early detection, new treatments and even prevention.”

Next, the team hopes to create mouse models with the human C4 variants associated with schizophrenia risk. They aim to find out more about how C4 contributes to synaptic pruning, and to determine whether such pruning may play a role in other neurological conditions.

“In this area of science, our dream has been to find disease mechanisms that lead to new kinds of treatments,” says McCarroll. “These results show that it is possible to go from genetic data to a new way of thinking about how a disease develops – something that has been greatly needed.”