Beef vs. bugs: Which is most nutritious?

As the importance of sustainability becomes clearer, the “bug or beef” debate is likely to grow in volume. If farming and fishing are not sustainable, could bugs fill the gap? And, if so, can Western cultures change their attitudes toward consuming bugs?

Eating insects, although a regular occurrence in many countries, tends to send a shiver down Western spines.

According to new research, regardless of our feelings about eating bugs, they could be just as nutritious as sirloin steak.

In 2013, the United Nations Food and Agriculture Organization released a document called Edible insects: Future prospects for food and feed security in 2013.

The report estimates that around 2 billion people already include insects in their diet, and 1,900 insect species are consumed globally.

According to the report, the insects most commonly consumed are beetles (31 percent), caterpillars (18 percent), and Hymenoptera (bees, wasps, and ants) – 14 percent.

By 2050, the world’s population is likely to swell to 9.7 billion. Current food production will need to double. Already, an estimated 1 billion people are chronically hungry (more than 13 percent of the entire population of earth).

The oceans are overfished, and climate change is making fresh water and farmable land scarcer. A backup plan is needed.

Is entomophagy the answer?

In recent years, eating insects – or entomophagy – has been discussed increasingly in Europe and America. Perhaps turning a crop pest into lunch might be a smart idea.

It is already well known that insects are a good source of protein, however, if they are to become a staple on a global scale, other nutrients will be necessary. In particular, iron content is of great importance if we plan to use insects to, at least partially, replace meat.

The nutritional profile of insects has not previously been studied in great depth. New research, published in the Journal of Agricultural and Food Chemistry, set out to fill in the blanks and ask whether insects could fill the same nutritional needs as beef.

Researchers from the School of Marine Sciences, at Ningbo University in China, teamed up with colleagues at King’s College London, in the United Kingdom.

Led by Yemisi Latunde-Dada, the team analyzed the nutritional profiles of four insects, namely, crickets, grasshoppers, buffalo worms, and mealworms. They assessed their mineral content and also calculated how much of each nutrient would likely be absorbed, using a model of human digestion.

Perhaps unsurprisingly, there was variation in the amount of available nutrients in each species they tested. Specifically, they measured calcium, iron, copper, manganese, magnesium, and zinc levels.

Available iron levels were measured in terms of how much ferritin was produced in the researchers’ gut model. Ferritin is a protein that stores and releases iron in almost all living creatures. Levels of ferritin correlate with the amount of iron stored in the body.

Cricket and sirloin beef had higher levels of iron, calcium, and magnesium. Importantly, crickets contained the greatest available amount of iron, trumping even beef. Additionally, the group found that the copper, zinc, manganese, magnesium, and calcium in crickets, grasshoppers, and mealworms were more readily available for absorption than the same nutrients in beef. 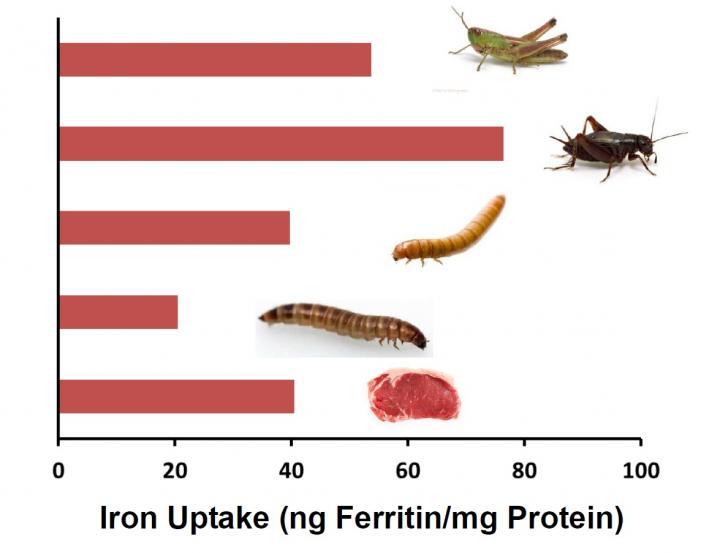 “Commonly consumed insect species could be excellent sources of bioavailable iron and could provide the platform for an alternative strategy for increased mineral intake in the diets of humans.”

In short, insects are capable of providing much of the nutrition humanity needs at a lower financial and environmental cost. The greatest struggle, however, will be changing Western perceptions toward insects as food.

The general attitude to entomophagy is one of disgust; we tend to associate eating insects with “primitive” behavior. It is difficult to change human attitudes, but it is not impossible. According to some researchers, however, it may not be optional.

Read more on how eating insects could benefit health.