What to know about a fever and HIV

One of the earliest indications of an HIV infection can be a fever. A fever in early-stage HIV infection may be a symptom of the virus rapidly multiplying in the body.

A fever usually occurs within 2 to 4 weeks of exposure to the virus. Sometimes, a person may mistake a fever and other symptoms for those of the flu, a sore throat, or even mononucleosis.

This article will help a person identify if their fever could be related to an acute HIV infection.

When a person contracts HIV, their body launches an immune system response. Doctors call this phase seroconversion or an acute HIV infection.

A fever is an increase in the body’s temperature that is one way it tries to kill off harmful pathogens.

The fever is usually the first of several other symptoms that may also occur. A person might have a low-grade fever of 100°F or a fever higher than 101.5°F.

Between 40 and 90 percent of people have an acute reaction, such as a fever, following exposure to HIV, but some people may not have symptoms, initially.

At this time, HIV may not show up as positive in a test, depending on the type of test a doctor uses.

However, a person is more likely to transmit the virus at this time.

If a person thinks they may have come into contact with HIV, they should abstain from any activities that may transmit the virus, such as sharing needles or having sex without a condom.

Acute HIV infection symptoms can last anywhere from a week to a month, according to the University of California San Francisco.

However, it is possible that a person can have HIV and not experience symptoms for 8 to 10 years. 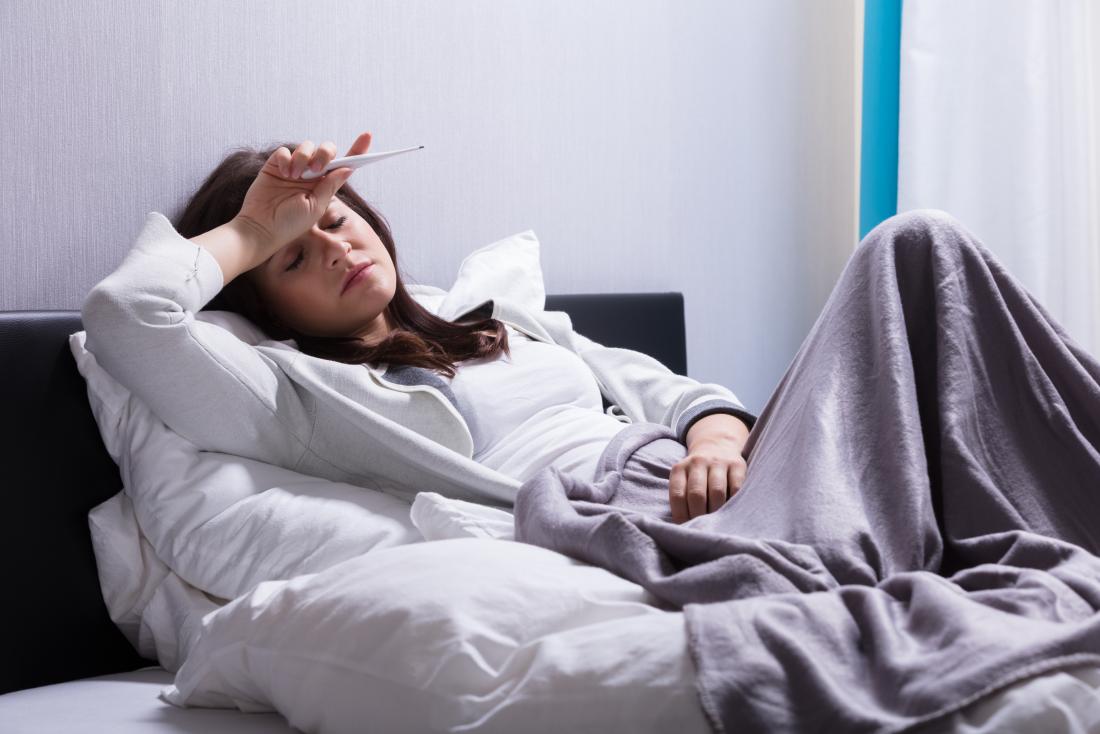 Muscle aches, fatigue, and flu-like symptoms are all signs of an acute HIV infection.

A fever is not the only symptom a person may experience when they have an acute HIV infection.

Signs and symptoms of an acute HIV infection usually resemble the flu. These include:

While these symptoms can closely resemble that of other illnesses, it is best to speak with a doctor if a person

Some symptoms, such as a rash and mouth sores, are more likely to be related to HIV than the flu.

Not all HIV tests detect acute infections, as many of them find antibodies the immune system makes to combat the virus, rather than detecting the virus itself.

A fever is a sign that the body’s immune system is developing antibodies to HIV. However, it may not have completely developed these antibodies in the early stages, and so an HIV test may miss them.

If a person suspects they might have had exposure to the virus, and they start to have symptoms, they may wish to let their doctor know.

Some tests can detect the presence of HIV genetic material or a p24 antigen, which the virus generates in an infection. Other names for these tests include a nucleic acid (NAT) test or fourth-generation antibody/antigen test, respectively.

A person may need to find an alternate testing option if a testing center does not test for acute infections. This is essential as the earlier a person receives a diagnosis, the sooner they can receive treatment.

If a person does not receive an HIV diagnosis in the acute stage, the condition may proceed to stage 2. Doctors call this the clinical latency stage.

At this time, HIV is not reproducing as rapidly as it was in the early stages. A person may not have a fever or other acute HIV symptoms, but the virus is continuing to replicate.

Ideally, a person with HIV will receive a diagnosis in the early stages so that they can seek treatment. For many people, treatment means the condition remains in stage 2 for the rest of their life.

If a person does not receive treatment, the virus can continue to replicate in their body and progress to stage 3 HIV, or acquired immunodeficiency syndrome (AIDS).

A person living with AIDS is more vulnerable to infections because their immune system does not work properly. The immune system cannot fight off the HIV infection and other bacteria, viruses, or fungi, making a person prone to potentially life-threatening illnesses.

While researchers have not found a cure for HIV, there are many medications a person can take to reduce the levels of HIV in their body and prevent its progression. These drugs are called antiretroviral therapies.

There are several different types of antiretrovirals, and a doctor will usually prescribe a combination. This helps to ensure the virus will not replicate. When the virus cannot replicate, the body is better able to fight it.

Most people with HIV can take these medications and bring their HIV levels down to undetectable levels. Undetectable HIV is also untransmittable, meaning the person cannot transmit the virus to anyone else.

Also, a person with undetectable HIV will usually experience better overall health than if their viral levels were higher.

A fever can be one of the first symptoms of an acute HIV infection. A person may experience other flu-like symptoms for anywhere between a week and a month.

Anyone who thinks they may have come into contact with HIV should speak to a doctor about testing, regardless of whether they have symptoms.

With innovations in medical treatment, HIV is a manageable health condition. Many people with HIV who receive successful treatment live long and healthy lives.