Eating watercress daily can significantly reduce DNA damage to blood cells, which is considered to be an important trigger in the development of cancer, University of Ulster scientists revealed today (15 February).

The research, published in this month’s American Journal of Clinical Nutrition, found that in addition to reducing DNA damage, a daily portion of watercress also increased the ability of those cells to resist further DNA damage caused by free radicals**.

The dietary trial involved 30 healthy men and 30 healthy women (including 30 smokers) eating an 85g bag (a cereal bowl full) of fresh watercress every day for eight weeks. The beneficial changes were greatest among the smokers. This may reflect the greater toxic burden or oxidative stress amongst the smokers, as smokers were also found to have significantly lower antioxidant levels at the start of the study compared to the non-smokers.

Professor Ian Rowland, who led the research project, said: “Our findings are highly significant. Population studies have shown links between higher intakes of cruciferous vegetables like watercress, and a reduced risk of a number of cancers. However, such studies don’t give direct information about causal effects. What makes this study unique is it involves people eating watercress in easily achievable amounts, to see what impact that might have on known bio-markers of cancer risk, such as DNA damage. Most studies to date have relied on tests conducted in test tubes or in animals, with chemicals derived from cruciferous vegetables.”

Prof. Rowland added: “Blood cell DNA damage is an indicator of whole body cancer risk, and, the results support the theory that consumption of watercress is linked to an overall reduced risk of cancer at various sites in the body. The nature of the study group also means that the results are applicable to the general population eating a normal diet.”

The single blind, randomised, crossover study was carried out with volunteers aged between 19 and 55. The volunteers ate one daily portion of watercress in addition to their normal diet. 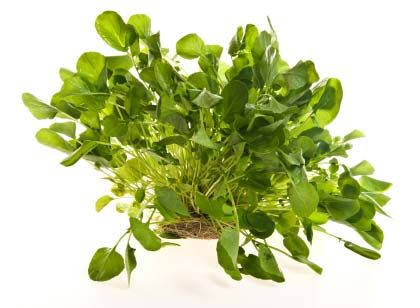 The key findings of the watercress diet:

Average intakes of dietary fibre, vitamin C, vitamin E, folate and beta- carotene, were significantly higher during the watercress phase of the study.

The two year research project was funded by The Watercress Alliance, made up of British watercress producers, Vitacress Salads, Alresford Salads and The Watercress Company.

Member Steve Rothwell commented: “We have known for years that the special mustard oil in watercress, PEITC, has significant anticancer properties. But research on PEITC has been confined mainly to laboratory cultures or animal studies.

“This is groundbreaking research on two fronts: it suggests the anticancer properties of watercress go beyond those attributable to PEITC and, more importantly, the study is the first to demonstrate a direct correlation between eating watercress and reducing one’s susceptibility to cancer”

The confidence to run this study came from a large body of existing evidence which has demonstrated the anti-cancer potential of watercress, including a laboratory study with human colon cancer cells, run by the same research group. Published in May 2006, the study showed for the first time that a watercress extract had beneficial effects on ‘initiation’, the DNA damage that triggers cancer cell development, ‘proliferation’ or uncontrolled growth of cancer cells, and ‘metastasis’, the spread of cancer cells. These are the three key stages of carcinogenesis, the process that results in cancer. Watercress extract was also shown to trigger cell death of cancerous calls a process known as apoptosis.

UK TV presenter and survivor of bowel cancer Lynn Faulds Wood commented: “The research from the University of Ulster is very interesting – it’s great to know there are simple things that people can do – like eating watercress – which could help them avoid getting cancers like bowel cancer in the future. It’s great that the watercress farmers want to raise awareness of bowel cancer, the commonest cancer in Europe. Thousands of people die unnecessarily of bowel cancer every year – with exercise and a good diet, many of them could live.”

Cultivated in pure spring water, watercress has been revered as a superfood down the centuries. Hippocrates, the father of medicine, is said to have located his first hospital close to a stream to ensure fresh watercress to help treat his patients. Greek soldiers were given it as a tonic before going into battle and the 16th Century herbalist Culpepper claimed it could cleanse the blood. It is brimming with more than 15 essential vitamins and minerals. Gram for gram, it contains more iron than spinach, more vitamin C than oranges and more calcium than milk.

Watercress is the UK’s most historic salad leaf and in the 19th Century was a staple part of the working class diet, most often eaten for breakfast in a sandwich. If people were too poor to buy bread, then they ate it on its own, which is why it was sometimes known as “poor man’s bread.” Bunches were handheld and eaten ice-cream cone style the first “on the go food.”

After decades of being pushed to the side of the plate as nothing more than a decorative garnish, watercress is currently enjoying a renaissance, with sales increasing by £18 million a year to £55 million. Consumers and celebrities alike are re-discovering its distinctive peppery taste and its amazing nutritional benefits. Liz Hurley has been known to drink seven cups of watercress soup a day!