Scientists have created a portable device that conducts kidney tests and transmits the data through a smartphone attachment, according to a study published in the journal Lab on a Chip.

Researchers from University of California, Los Angeles (UCLA), say the device could significantly reduce the need for frequent clinician visits for diabetes sufferers, and those with chronic kidney conditions.

The device, which weighs around 148g (one-third of a pound) and attaches to the camera of a smartphone, can analyze the level of albumin present within a person’s urine.

Albumin is a protein found in blood. When found in urine, this is a sign that the kidney is damaged.

There are two small fluorescent disposable test tubes attached to the device. One contains a control liquid, and the other contains a urine sample mixed with fluorescent dyes.

Once the urine sample is injected into the device using a small syringe, the device projects a beam of visible light through the test tubes. The camera of the smartphone captures this light after it passes through an extra lens.

Using an Android or iPhone application, the raw images are processed in less than one second. The device then sends the results of the test to a database or health care provider.

The scientists say the test is accurate to within less than 10 micrograms per mm. They add that this accuracy is within the accepted clinical standards used to diagnose conditions such as microalbuminuria – the excretion of albumin in urine.

“This automated albumin testing tool running on a smartphone could be useful for early diagnosis of kidney disease or for monitoring of chronic patients, especially those suffering from diabetes, hypertension, and/or cardiovascular diseases.”

“This device provides an extremely convenient platform for chronic patients at home or in remote locations where cell phones work.”

The study authors add that the test will take around 5 minutes in total, and that the estimated cost of the device commercially would be around $50-$100 per unit. 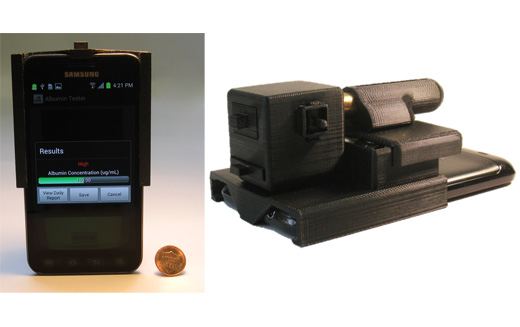 The idea of using smartphone applications as a way of diagnosing ailments is a growing trend.

A recent study by UK researchers unveiled the development of a portable eye clinic in a smartphone, able to diagnose cataracts, check prescriptions for vision lenses, and even check the retina for signs of disease.

Another development from US researchers this year was a smartphone app launched in March 2013 that can provide a clinical diagnosis of skin cancer within 24 hours of testing.