Scientists have found a way to make sense of the large amounts of data yielded by a new tissue imaging technique that could improve the power of cancer diagnosis – which currently takes weeks because samples must be interpreted by the histologist’s eye in the pathology lab.

Mass spectrometry imaging (MSI), the technique used by the researchers from the UK’s Imperial College London, measures the way hundreds or thousands of chemical components are distributed in a tissue sample.

It has held the promise of removing the need for histologists to look down microscopes, but the data produced by the test could not – until now – be easily interpreted.

The specialists from Imperial’s department of surgery and cancer have created a detailed analysis that correlates the chemical compositions seen under MSI with the tissue types that have already been described by years of microscope work.

This means that, rather than rely on analysis-by-eye, future imaging via MSI could identify the type of tissue and whether it is cancerous in computer-quick time.

One of the spectrometry researchers in the study, Zoltan Takats PhD, says the technique could change tissue diagnostics altogether:

“This technology can change the fundamental paradigm of histology. Instead of defining tissue types by their structure, we can define them by their chemical composition.

This method is independent of the user – it’s based on numerical data, rather than a specialist’s eyes – and it can tell you much more in one test than histology can show in many tests.”

Another of the authors, Kirill Veselkov PhD, says MSI is an “extremely promising technology” but one that needs “very complex” interpretation. Now, however, automation is closer to reality. He says:

“This work overcomes some of the obstacles to translating MSI’s potential into the clinic. It’s the first step towards creating the next generation of fully automated histological analysis.”

Prof. Jeremy Nicholson, head of the Imperial department of surgery and cancer, adds more context for the potential impact of the changes his team is helping to pioneer, by reminding us of the longstanding place held by the microscope.

“There have been relatively few major changes in the way we study tissue sample pathology since the late 19th century, when staining techniques were used to show tissue structure,” Prof. Nicholson says.

“Such staining methods are still the mainstay of hospital histopathology; they have become much more sophisticated but they are slow and expensive to do, and require considerable expertise to interpret.”

Prof. Nicholson adds that chemical imaging that can “sense abnormal tissue chemistry in one clean sweep” offers a “transformative opportunity” for three important elements of the diagnostic process:

These three mean that further development of MSI to help diagnose tissue pathologies “is likely to impact on future pathology services and to improve patient safety.”

Whereas a stain applied by the histologist can pick out only one characteristic of a tissue, MSI can image numerous chemical characteristics.

The MSI beam moves across the surface of the tissue sample to produce an image made up of many pixels, each of which contains data on thousands of chemicals. 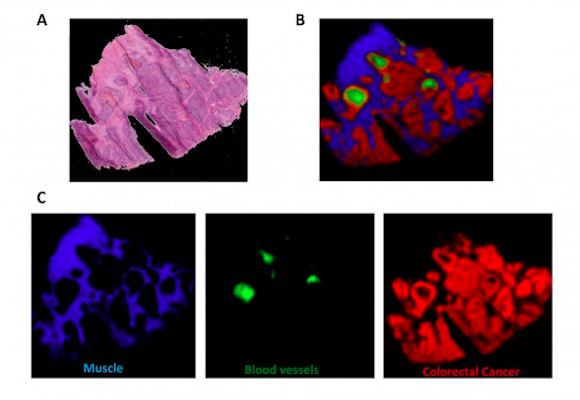 Computers can learn to identify different types of tissue – healthy and diseased – as researchers continue to run studies that analyze the digital chemical pictures, holding them up against the diagnostic picture already established through traditional means, such as stain analysis.

A single MSI test can take just a few hours to provide much more detailed information than can be picked up from standard histological tests.

The present researchers say, for example, that the test can pick out the type and sub-type of cancer, not just whether the tissue is cancerous.

The power of the technology can also be applied, the study paper says, to the search for new biomarkers produced by tumors, and to develop new targets for cancer treatments.