Everything you need to know about receding gums

Gums can become pushed back or wear away and expose the pink tissue that covers the roots of the teeth.

Gums might also recede around a tooth if it is in an abnormal position.

Receding gums becomes a health concern when the roots of the teeth become exposed, leaving the teeth at risk of decay, infection, and loss.

If people start treatment at an early stage, they can stop or reverse the process of gum recession.

If the recession is severe and causing symptoms, such as tooth sensitivity, pain, or infection, then various treatments are available. These include deep cleaning, medicating infections, and tissue grafts.

Receding gums is a common condition, but people often do not realize their gums are receding until a late stage in the process.

What are the gums?

Receding gums is a condition that damages the soft, pink tissue surrounding the teeth.

The gums, or gingivae, are composed of pink tissue in the mouth that meets the base of the teeth. There is one gum or gingiva for each set of teeth.

Gingival tissue is dense. It has a good supply of blood vessels beneath a moist surface, otherwise known as a mucous membrane. The gingival tissue connects with the rest of the mouth lining but is pink instead of shiny red.

The gums are firmly attached to the jawbone and tightly cover each tooth up to the neck. When intact, the gums cover the roots of the teeth and protect them.

Gingival recession happens after a person has experienced a loss of tissue in the gum. It exposes the fragile roots of the teeth to bacteria and plaque and can lead to decay.

Poor oral hygiene and periodontal disease contribute to a gingival recession. However, receding gums can also happen in people with good oral hygiene.

Physical wear of the gums and inflammation of the tissues are the chief reasons for recession.

Some people may also be prone to receding gums because of inherited factors. These factors include the position of the teeth and gum thickness.

Physical wear of the gums by vigorous tooth brushing or the use of hard bristles is a further, common cause of receding gums. Over-brushing causes receding gums even when dental hygiene might otherwise be good.

This type of physical recession often affects the left side of the mouth more. This is because most people use a toothbrush in their right hand and put more pressure on the left gums. The pattern also tends to affect the side gums more than the front area.

Other physical factors that push the gums back include lip or tongue piercings, misaligned teeth, and damage from dental treatment.

Some people are more prone to the inflammatory causes of receding gums due to having more delicate tissue. Thinner gum tissue makes it more likely than plaque will cause inflammation.

Age is a key risk factor for receding gums. Around of people older than 65 years have a receding gum in at least one tooth.

People who smoke and use tobacco products also face an increased risk of receding gums.

Genetics is another factor, as people who have thin or weak gums can pass these characteristics on via their genes.

Diabetes can also the risk of receding gums. 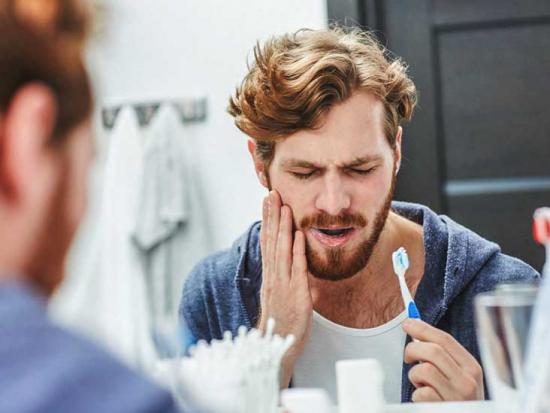 Receding gums can cause teeth to feel sensitive to cold and heat.

Many people with receding gums may have no concerns about them early on and might not be aware that their gums are receding.

However, when people have receding gums, they may experience the following:

Most importantly, receding gums can be a symptom of underlying dental problems, including gum disease, and can increase the risk of tooth decay and tooth loss. They can also lead to bad breath and bleeding gums.

Most cases of mild gum recession do not need treatment. Dentists may advise on prevention and offer to monitor the gums. Teaching effective but gentle brushing is an effective early intervention.

For people who do need treatment, several options are available:

Some of the causes of gingival recession are preventable.

Click here to shop for a wide selection of soft toothbrushes, rated by thousands of customers.

People who have concerns about their teeth or receding gums should visit their dentist to discuss their worries.