Lupus is a long-term autoimmune disease in which the body's immune system becomes hyperactive and attacks normal, healthy tissue. Symptoms include inflammation, swelling, and damage to the joints, skin, kidneys, blood, heart, and lungs.

Due to its complex nature, people sometimes call lupus the "disease of 1,000 faces."

In the United States, people report around 16,000 new cases of lupus each year, and up to 1.5 million people may be living with the condition, according to the Lupus Foundation of America.

The Foundation say that lupus affects women in particular, and it is most likely to appear between the ages of 15 and 44 years.

Lupus gained public attention in 2015 after the singer Selena Gomez announced she received a diagnosis in her late teens and underwent treatment for the condition.

Lupus is not a contagious disease. A person cannot transmit it sexually or in any other way to another person.

However, in rare cases, women with lupus may give birth to children who develop a form of lupus. This is called neonatal lupus.

There are different kinds of lupus. This article will focus mainly on systemic lupus erythematosus (SLE), but other types include discoid, drug-induced, and neonatal lupus.

SLE is the most familiar type of lupus. It is a systemic condition. This means it has an impact throughout the body. The symptoms can range from mild to severe.

It is more severe than other types of lupus, such as discoid lupus, because it can affect any of the body's organs or organ systems. It can cause inflammation in the skin, joints, lungs, kidneys, blood, heart, or a combination of these.

This condition typically goes through cycles. At times of remission, the person will have no symptoms. During a flare-up, the disease is active, and symptoms appear.

In discoid lupus erythematosus (DLE) — or cutaneous lupus — symptoms affect only the skin. A rash appears on the face, neck, and scalp.

The raised areas may become thick and scaly, and scarring may result. The rash may last from a number of days to several years, and it may recur.

DLE does not affect the internal organs, but around 10 percent of people with DLE will go on to develop SLE, according to the Lupus Foundation of America. It is not clear, however, if these individuals already had SLE and just showed clinical signs on the skin or if there is a progression from DLE or SLE.

Subacute cutaneous lupus erythematosus refers to skin lesions that appear on parts of the body that are exposed to the sun. The lesions do not cause scarring.

In around 10 percent of people with SLE, symptoms occur because of a reaction to certain prescription drugs. According to Genetics Home Reference, some 80 drugs may cause the condition.

These include some of the drugs that people use to treat seizures and high blood pressure. They also include some thyroid medications, antibiotics, antifungals, and oral contraceptive pills.

Drugs that are commonly associated with this form of lupus are:

Drug-induced lupus typically goes away after the person stops taking the medication.

Most babies born to mothers with SLE are healthy. However, around 1 percent of women with autoantibodies relating to lupus will have a baby with neonatal lupus.

The woman may have SLE, Sjögren's syndrome, or no disease symptoms at all.

Sjögren's syndrome is another autoimmune condition that often occurs with lupus. Key symptoms include dry eyes and a dry mouth.

At birth, babies with neonatal lupus may have a skin rash, liver problems, and low blood counts. Around 10 percent of them will have anemia.

The lesions usually go away after a few weeks. However, some infants have a congenital heart block, in which the heart cannot regulate a normal and rhythmic pumping action. The infant may need a pacemaker. This can be a life-threatening condition.

It is important for women with SLE or other related autoimmune disorders to be under a doctor's care during pregnancy.

Lupus is an autoimmune condition, but the exact cause is unclear.

The immune system protects the body and fights off antigens, such as viruses, bacteria, and germs.

It does this by producing proteins called antibodies. White blood cells, or B lymphocytes, produce these antibodies.

When a person has an autoimmune condition, such as lupus, the immune system cannot differentiate between unwanted substances, or antigens, and healthy tissue.

As a result, the immune system directs antibodies against both the healthy tissue and the antigens. This causes swelling, pain, and tissue damage.

The most common type of autoantibody that develops in people with lupus is an antinuclear antibody (ANA). The ANA reacts with parts of the cell's nucleus, the command center of the cell.

The autoantibodies can then attack the DNA in the nucleus of these cells. This is why lupus affects some organs and not others.

Why does the immune system go wrong?

One possible theory relates to cell death, a natural process that occurs as the body renews its cells, according to Genetics Home Reference.

Some scientists believe that, due to genetic factors, the body does not get rid of cells that have died.

These dead cells that remain may release substances that cause the immune system to malfunction.

Lupus may develop in response to a number of factors. These may be hormonal, genetic, environmental, or a combination of these.

Hormones are chemical substances that the body produces. They control and regulate the activity of certain cells or organs.

Sex: The U.S. National Institutes of Health note that females are nine times more likely to have lupus than males.

Age: Symptoms and diagnosis often occur between the ages of 15 and 45 years, during the childbearing years. However, 20 percent of cases appear after the age of 50 years, according to Genetics Home Reference.

As 9 out of 10 occurrences of lupus affect females, researchers have looked at a possible link between estrogen and lupus. Both men and women produce estrogen, but women produce more.

In a review published in 2016, scientists observed that estrogen can affect immune activity and induce lupus antibodies in mice that are susceptible to lupus.

This may explain why autoimmune diseases are more likely to affect women than men.

In 2010, researchers who published a study on self-reported flares in the journal Rheumatology found that women with lupus report more severe pain and fatigue during menstruation. This suggests that flares may be more likely at this time.

There is not enough evidence to confirm that estrogen causes lupus. If there is a link, estrogen-based treatment could regulate the severity of lupus. However, more research is necessary before doctors can offer it as a treatment.

Researchers have not proved that any specific genetic factor causes lupus, although it is more common in some families.

Genetic factors may be the reason why the following are risk factors for lupus:

Race: People of any background can develop lupus, but it is two to three times more common in people of color, compared with the white population. It is also more common in Hispanic, Asian, and Native American women.

Family history: A person who has a first- or second-degree relative with lupus will have a higher risk of developing it.

Scientists have identified certain genes that may contribute to the development of lupus, but there is not enough evidence to prove that they cause the disease.

In studies of identical twins, one twin may develop lupus while the other does not, even if they grow up together and have the same environmental exposures.

If one member of a twin pair has lupus, the other has a 25-percent chance of developing the disease, according to a study published in Seminars in Arthritis and Rheumatism in 2017. Identical twins are more likely to both have the condition.

Lupus can happen in people with no family history of the disease, but there may be other autoimmune diseases in the family. Examples include thyroiditis, hemolytic anemia, and idiopathic thrombocytopenia purpura.

Some have proposed that changes in the x-chromosomes might affect the risk.

Environmental agents — such as chemicals or viruses — may contribute to triggering lupus in people who are already genetically susceptible.

Smoking: A rise in the number of cases in recent decades may be due to higher tobacco exposure.

Exposure to sunlight: Some suggest that this may be a trigger.

Medication: Around 10 percent of cases may be drug-related, according to Genetics Home Reference

Viral infections: These may trigger symptoms in people who are prone to SLE.

Lupus is not contagious, and a person cannot transmit it sexually.

Recently, scientists have been looking at gut microbiota as a possible factor in the development of lupus.

Scientists who published research in Applied and Environmental Microbiology in 2018 noted that specific changes in gut microbiota feature in both people and mice with lupus.

They call for more research into this area.

Are children at risk?

Lupus is rare in children under the age of 15 years unless their birth mother has it. In this case, a child may have lupus-related heart, liver, or skin problems.

Infants with neonatal lupus may have a higher chance of developing another autoimmune disease later in life.

The symptoms of lupus occur in times of flare-ups. Between flare-ups, people usually experience times of remission, when there are few or no symptoms.

Lupus has a wide range of symptoms, including: 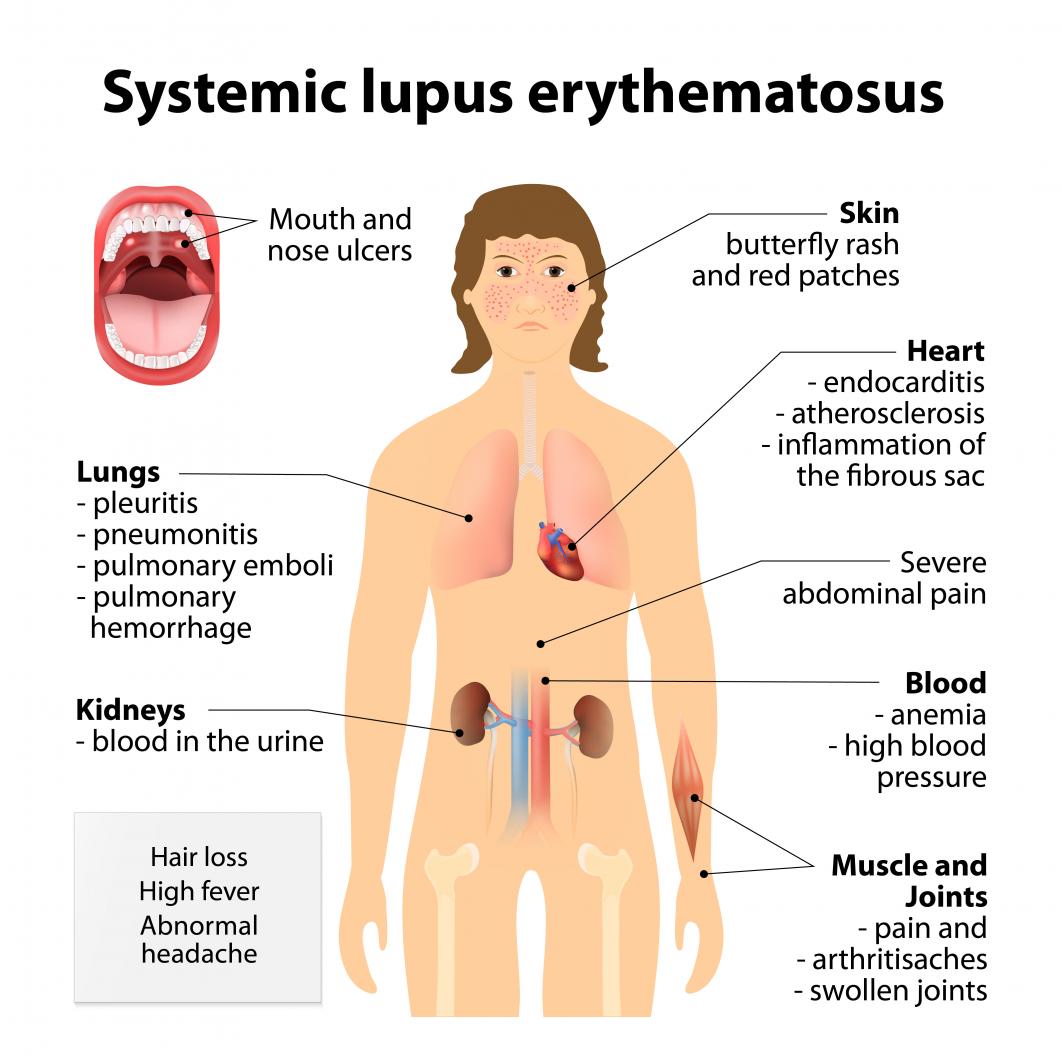 Lupus affects people in different ways. Symptoms can occur in many parts of the body.

Effect on other body systems

Kidneys: Inflammation of the kidneys (nephritis) can make it difficult for the body to remove waste products and other toxins effectively. Around 1 in 3 people with lupus will have kidney problems.

Lungs: Some people develop pleuritis, an inflammation of the lining of the chest cavity that causes chest pain, particularly with breathing. Pneumonia may develop.

Blood vessels: Vasculitis, or inflammation of the blood vessels, can occur. This can affect circulation.

Heart: If inflammation affects the heart, it can result in myocarditis and endocarditis. It can also affect the membrane that surrounds the heart, causing pericarditis. Chest pain or other symptoms may result. Endocarditis can damage the heart valves, causing the valve surface to thicken and develop. This can result in growths that can lead to heart murmurs.

Having lupus increases the risk of a number of health problems.:

Bone tissue death: This occurs when there is low blood supply to a bone. Tiny breaks can develop in the bone. Eventually, the bone may collapse. It most commonly affects the hip joint.

Pregnancy complications: Women with lupus have a higher risk of pregnancy loss, preterm birth, and preeclampsia, a condition that includes high blood pressure. To reduce the risk of these complications, doctors often recommend delaying pregnancy until lupus has been under control for at least 6 months.

Apart from medication, the following may help to relieve pain or reduce the risk of a flare:

Some people use the supplement thunder-god vine. However, the National Center for Complementary and Integrative Health (NCCIH) warn that this can be poisonous. It is important to speak to a doctor before using it.

In the past, people who had a diagnosis of lupus would not usually survive for more than 5 years.

Now, however treatment can significantly increase a person's lifespan, according to the National Institutes of Health.

Effective therapy also makes it possible to manage lupus, so that a person can live an active, healthy life.

As scientists learn more about genetics, doctors hope that one day they will be able to identify lupus at an earlier stage. This will make it easier to prevent complications before they occur.

Sometimes people choose to join a clinical trial, as this can give access to new medications. To find out more about clinical trials click here.