Emotions manifest themselves as sensations in the body. While anxiety is often accompanied by a tight feeling in the chest, love may elicit a warm feeling throughout the body. But now, a new study from researchers in Finland reveals that perceptions of these sensations are consistently similar around the world, suggesting an underlying biological basis.

The researchers, from Aalto University, published the results of their study in the journal Proceedings of The National Academy of Sciences.

They note that emotions adjust not only our mental state, but also our bodily sensations.

In five experiments conducted online, the researchers showed over 700 participants – who were from Finland, Sweden and Taiwan – two silhouettes of bodies next to words, stories, movies or facial expressions that evoked emotions.

The participants were asked to color regions of the body where they felt activity was increasing or decreasing as they viewed each stimulus.

Results show that the most common emotions – including anger, fear, disgust, happiness, sadness, anxiety and love – produce strong sensations in the body, but the location for these sensations varies for different emotions.

For example, happiness triggered warm sensations throughout the whole body, whereas pride only activated the upper body, including the head and chest.

Interestingly, these sensations were consistently similar across the different cultures – West European and East Asian – which the researchers say suggests there is a biological basis for emotions and their corresponding sensations in the body. 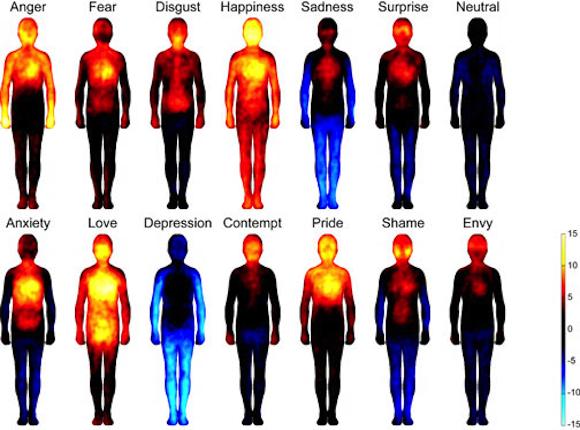 Assistant Prof. Lauri Nummenmaa, from Aalto University, says that awareness of these corresponding changes in the body could bring about conscious emotional sensations, such as feeling happy.

In their conclusions, the researchers write:

“Monitoring the topography of emotion-triggered bodily sensations brings forth a unique tool for emotion research and could even provide a biomarker for emotional disorders.”

They add that their findings have major implications for understanding the function of emotions in the body:

“We propose that emotions are represented in the somatosensory system as culturally universal categorical somatotopic maps. Perception of these emotion-triggered bodily changes may play a key role in generating consciously felt emotions.”

Research for the study was funded by the European Research Council (ERC), the Academy of Finland and Aalto University.

Medical News Today recently reported on a study that suggested performance anxiety is better helped by telling yourself, “I’m excited,” rather than “I am calm.”

The researchers suggested this technique works because anxiety and excitement are emotional states that are both characterized by high arousal, and they are therefore more closely related.