Ebola: What you need to know

Ebola virus disease is a serious, often fatal condition in humans and nonhuman primates. Ebola is one of several viral hemorrhagic fevers, caused by infection with a virus of the Filoviridae family, genus Ebolavirus.

The fatality rates of Ebola vary depending on the strain. For example, Ebola-Zaire can have a fatality rate of up to 90 percent while Ebola-Reston has never caused a fatality in humans.

Ebola tends to spread quickly through families and friends as they are exposed to infectious secretions when caring for an ill individual. The time interval from infection with Ebola to the onset of symptoms ranges from 2-21 days.

The time interval from infection with Ebola to the onset of symptoms is 2-21 days, although 8-10 days is most common. Signs and symptoms include:

Some patients may experience:

Laboratory tests may show low white blood cell and platelet counts and elevated liver enzymes. As long as the patient’s blood and secretions contain the virus, they are infectious. In fact, Ebola virus was isolated from the semen of an infected man 61 days after the onset of illness.

What are the treatments for Ebola?

There is currently no licensed vaccine available for Ebola. Several vaccines are being tested, but at this time, none are available for clinical use.

At the moment, treatment for Ebola is limited to intensive supportive care and includes:

On July 31 2015, published preliminary results of a vaccine trial funded and organized by the WHO; the Ebola ca Suffit vaccine had 100 percent efficacy in the trial, which took place in Guinea and involved 4,000 people. The full results of this trial were published in in February 2017.

The next step is to make these vaccines available as soon as possible – and in sufficient quantities – to protect critical frontline workers and to make a difference in the epidemic’s future evolution.

It is still unknown how individuals are infected with Ebola, so stopping infection is still difficult. Preventing transmission is achieved by:

Thorough sterilization and proper disposal of needles in hospitals are essential in preventing further infection and halting the spread of an outbreak.

Ebola tends to spread quickly through families and among friends as they are exposed to infectious secretions when caring for an ill individual. The virus can also spread quickly within healthcare settings for the same reason, highlighting the importance of wearing appropriate protective equipment, such as masks, gowns, and gloves.

Together with the WHO, the Centers for Disease Control and Prevention (CDC) has developed a set of guidelines to help prevent and control the spread of Ebola – .

Ebola is caused by viruses in the Ebolavirus and Filoviridae family. Ebola is considered a zoonosis, meaning that the virus is present in animals and is transmitted to humans.

How this transmission occurs at the onset of an outbreak in humans is unknown.

Person-to-person transmission occurs after someone infected with Ebolavirus becomes symptomatic. As it can take between 2 and 21 days for symptoms to develop, a person with Ebola may have been in contact with hundreds of people, which is why an outbreak can be hard to control and may spread rapidly.

How does Ebola transmission occur in humans? 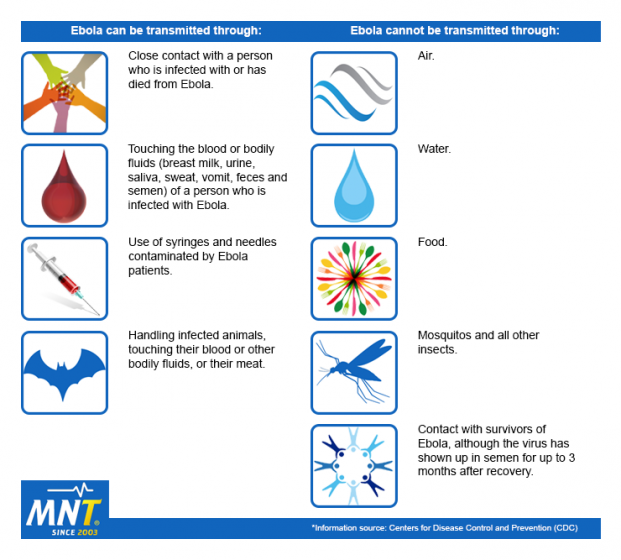 When an Ebola infection occurs in humans, the virus can be spread in several ways to others. Above is a list of ways Ebola can and cannot be transmitted.

Transmission of Ebola between humans can occur through:

There is no evidence that Ebola can be spread via insect bites.

What is the history of Ebola?

The first cases of Ebola were reported simultaneously in 1976 in Yambuku, near the Ebola River in Zaire (now the Democratic Republic of the Congo) and in Nzara, Sudan.

Since then, eruptions or asymptomatic cases of Ebola in humans and animals have surfaced intermittently in the following locations due to outbreaks, laboratory contamination, and accidents:

The 2014 Ebola outbreak was the largest in history, primarily affecting Guinea, northern Liberia, and Sierra Leone. The Centers for Disease Control and Prevention (CDC) estimates that the epidemic caused more than 11,000 deaths, with almost all occurring in West Africa.

In the U.S., reports indicate that there have been two imported cases, including one death, and two locally acquired cases in healthcare workers.

A small number of cases were reported in Nigeria, Mali, and Senegal, with health authorities able to contain these cases and prevent further spread.

The risk of contracting Ebola is low. There is a higher risk of becoming infected when:

According to the WHO, samples from patients with Ebola are an extreme biohazard risk. Testing should be conducted under maximum biological containment conditions.

Before Ebola can be diagnosed, other diseases should be ruled out, and, if Ebola is suspected, the patient should be isolated. Public health professionals should be notified immediately. Ebola virus infections can be diagnosed definitively in a laboratory through several types of tests, including:

In the more advanced stages of the disease or after recovery, diagnosis is made using IgM and IgG antibodies. Ebola can be diagnosed retrospectively in deceased patients by other forms of testing.