Almond milk is the most popular plant milk in the United States.

It is rich in several healthy nutrients, but compared to whole almonds it is watered down and missing most of the fiber.

While its health effects have not been directly examined in controlled studies, some of its components have been studied extensively.

This is a review of almond milk and its health benefits.

What is almond milk? 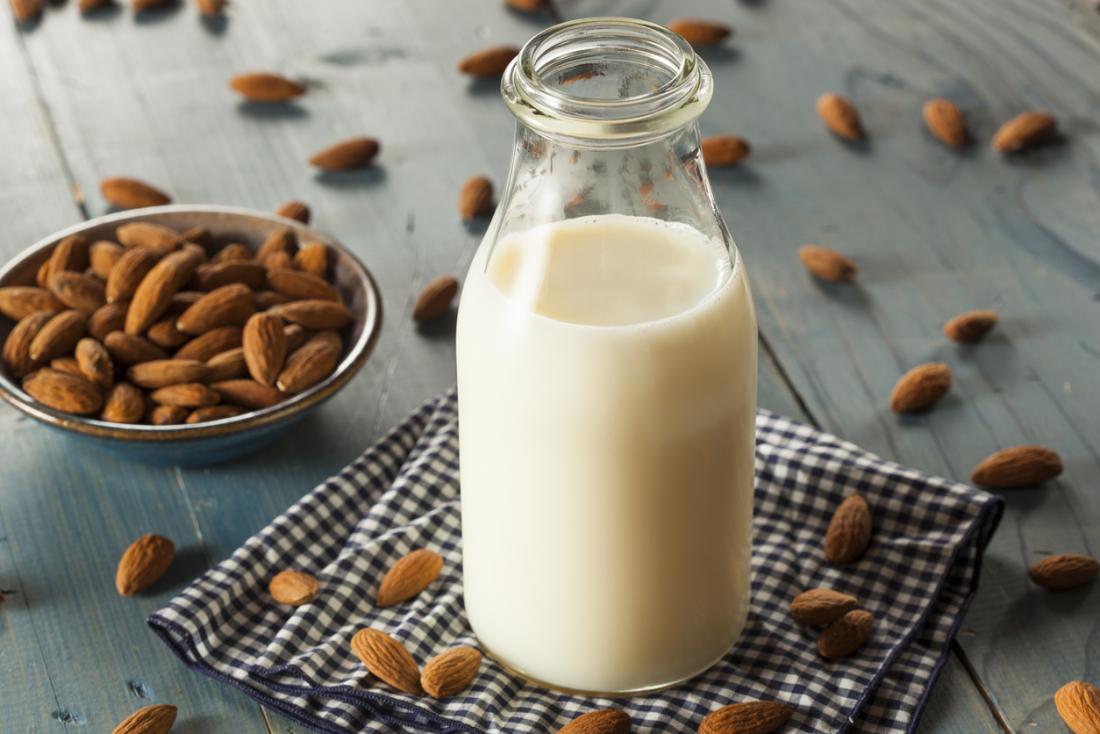 Almond milk is made by blending almonds with water and then straining the mixture to remove the solids. It can also be made by adding water to almond butter.

It has a pleasant, nutty flavor and creamy texture that’s similar to regular milk. For this reason, it is a popular choice for vegans and those who are allergic or intolerant to dairy.

You can find almond milk in most supermarkets, usually in the health food section. It is also very easy to make at home.

Commercial almond milk comes in a variety of brands and flavors. For health reasons, it is best to choose almond milk that does not contain added sugar.

Most brands are also enriched with vitamins, minerals or protein. If you do not eat dairy, you might benefit from choosing products that are enriched with calcium.

Controlled studies have linked whole almonds to a variety of health benefits, but many of them may not apply to almond milk.

This is because almond milk is strained and usually made from blanched (skinless) almonds. Most of the fiber and a large portion of its antioxidants have been removed.

Second, almond milk is watered down and a much less concentrated source of nutrients than whole almonds.

The concentration of nutrients in almond milk depends on how many almonds were used to make it, how much water was used and whether it contains any added vitamins and minerals.

For instance, around 72 almonds (86 grams) may be used to make one cup (262 grams) of homemade almond milk, whereas commercial almond milk is generally much more diluted (1).

Although almond milk is not nearly as nutritious as cow’s milk, enriched products come close.

For comparison, the table below shows the amounts of a few nutrients, vitamins and minerals in one cup of commercial almond milk and low-fat cow’s milk (2, 3).

Some of the minerals in almond milk are not absorbed as well as those found in milk. This is partly because almonds contain phytic acid, an antinutrient that reduces the absorption of iron, zinc, and magnesium (4, 5, 6, 7).

Since almond milk is lacking in many nutrients, it is not suitable as a milk replacement for infants.

2. It is low in calories

Although almonds are 50% fat and high in calories, commercial almond milk is a low-calorie beverage.

This means that you can drink a lot of it without having to worry about weight gain. It is also nutrient dense, providing lots of nutrients relative to its calorie content.

Producers of almond milk dilute it with water to make its fat content similar to that of low-fat milk, which is around 1% fat.

One cup of almond milk contains only 39 calories, which is half the amount of calories found in one cup of skim milk (2, 8).

However, not all almond milk is the same. Homemade almond milk or certain brands might contain a much higher number of calories, depending on how many almonds they contain per cup.

Additionally, some products contain added sugar, which should be avoided if you are concerned about your waistline.

Bottom Line: Factory-made almond milk may contain even fewer calories than a glass of skim milk. However, this might not apply to all brands, so make sure to check the nutrient labels.

A large part of the almond milk on the market is loaded with added sugar.

Almond milk is also high in fat and protein relative to its carb content. For this reason, it doesn’t cause a spike in blood sugar levels, making it suitable for diabetics, as well as those who are on a low-carb diet.

However, make sure to read the ingredient lists and select products that are as pure as possible.

Bottom Line: Almond milk is a low-carb beverage, making it a perfect choice for people on a low-carb diet, as well as those who need to keep a check on their blood sugar levels.

Almond milk contains no cow’s milk or other animal products, making it a great option for vegans and those who are intolerant or allergic to milk.

Many people are intolerant to milk sugar (lactose) and unable to completely digest it. Undigested lactose passes down to the colon where it is fermented by the resident bacteria, leading to excessive gas, bloating, diarrhea and associated discomfort.

Being dairy free, almond milk contains no lactose at all, making it a suitable milk replacement for people with lactose intolerance.

Bottom Line: Almond milk is an imitation milk and doesn’t contain any dairy at all, which makes it a popular milk alternative for vegans and people with lactose intolerance or milk allergies.

Dairy products are the richest dietary source of calcium. In contrast, almonds are a poor source.

To make almond milk more similar to real milk, producers often enrich it with calcium. For instance, one cup of commercial almond milk may contain up to 45-50% of the RDI (2, 9).

As a result, enriched almond milk is an excellent calcium source for people who don’t consume dairy products, such as vegans or those who are intolerant to lactose or allergic to milk.

Calcium is essential for building and maintaining bones. For this reason, an adequate calcium intake reduces the risk of osteoporosis, a condition associated with weak bones and fractures (11).

Bottom Line: Almond milk is often enriched with calcium, making it an excellent source. Regular consumption of enriched almond milk may reduce the risk of osteoporosis among those who don’t consume dairy products.

6. It may reduce the risk of heart disease

Observational studies show that regular consumption of nuts is linked to a reduced risk of heart disease. This is partly because they are high in vitamin E and contain healthy fats (12, 13).

Oleic acid, the main fatty acid in almond oil, has been linked to beneficial changes in blood lipids (14).

These beneficial changes in the blood lipid profile are associated with a reduced risk of heart disease (16).

Although about 50% of the calories in almond milk come from fat, it is generally a low-fat product and probably doesn’t have a significant impact on your blood lipid profile.

However, it is a rich source of vitamin E, providing around half of the RDI in one cup (2).

Vitamin E is believed to be responsible for many of the health benefits of almonds. It protects lipids against oxidation, reducing the levels of oxidized LDL cholesterol, which is a risk factor for heart disease (17, 18).

Many people are low or deficient in vitamin D. This raises the risk of brittle bones, fatigue and weak muscles (19).

There are few good sources of vitamin D in the human diet. That’s why a common public health strategy is to enrich certain foods with vitamin D. This especially applies to milk products.

Just like regular milk, almond milk often contains added vitamin D. For example, one cup may contain 101 IU (2.4 µg) of vitamin D, which is 25% of the RDI. One cup of vitamin-enriched cow’s milk contains similar amounts (9).

This makes enriched almond milk a useful source of vitamin D that can prevent deficiency when consumed regularly.

It is easy to make

However, it is also very easy to make at home. All you need is a blender, water, and a cup of almonds. Blenders and almonds are available to purchase online.

First, the skin is removed. You can do this by soaking the almonds in water for 8-12 hours or overnight. The soak softens the skin, allowing it to peel off easily when the almonds are rinsed.

Next, put the almonds in a blender with four cups of water and mix until smooth. Finally, remove the solids by straining the mixture through a cheese cloth or nut milk bag.

Here are some healthy recipes:

Bottom Line: Almond milk is one of the most popular plant milks and is available in most supermarkets. It is also easy to make at home.

How to use almond milk

Just like regular milk, almond milk is incredibly versatile. Below are a few ideas of how you can use it as a milk replacement:

For those who are prone to kidney stones, almond milk should not be consumed in excessive amounts. This is because of its calcium oxalate content, which is generally higher in homemade almond milk (20).

Some people are also concerned about carrageenan, a thickener used in some commercial almond milk products. Yet, most scientists agree that the type and amount of carrageenan used in food products are safe (21, 22, 23).

Bottom Line: Almond milk is a great replacement for regular milk. However, those prone to kidney stones should avoid drinking it in high amounts.

Almond milk is a highly versatile food product and great milk substitute for vegans and people who are allergic or intolerant to dairy. Various brands are available to purchase online.

Being naturally rich in several important nutrients, almond milk is an excellent addition to a healthy diet.