Meningitis in babies: What you need to know

Meningitis is a condition that causes inflammation in the meninges, which protect the brain and spinal cord. Meningitis is most often caused by a virus or bacteria.

Meningitis is an uncommon but potentially dangerous infection. Babies under 2 months of age are at greater risk of getting meningitis, according to the American Academy of Pediatrics (AAP).

Experts are not sure why some babies get meningitis, but they believe it could be related to their immature immune systems.

Meningitis can have lasting effects on babies and can be fatal in some cases. However, prompt medical treatment can significantly reduce the risk of serious complications.

The symptoms of meningitis in babies may not be alarming at first. Some babies may simply appear irritable or tired.

Meningitis can become serious quickly, so it is essential to be aware of its symptoms and to seek medical care immediately if meningitis is suspected.

The most common symptoms of meningitis in babies include:

Babies that have any symptoms that could be meningitis should get emergency medical care. Prompt and aggressive treatment helps ensure a better outcome. 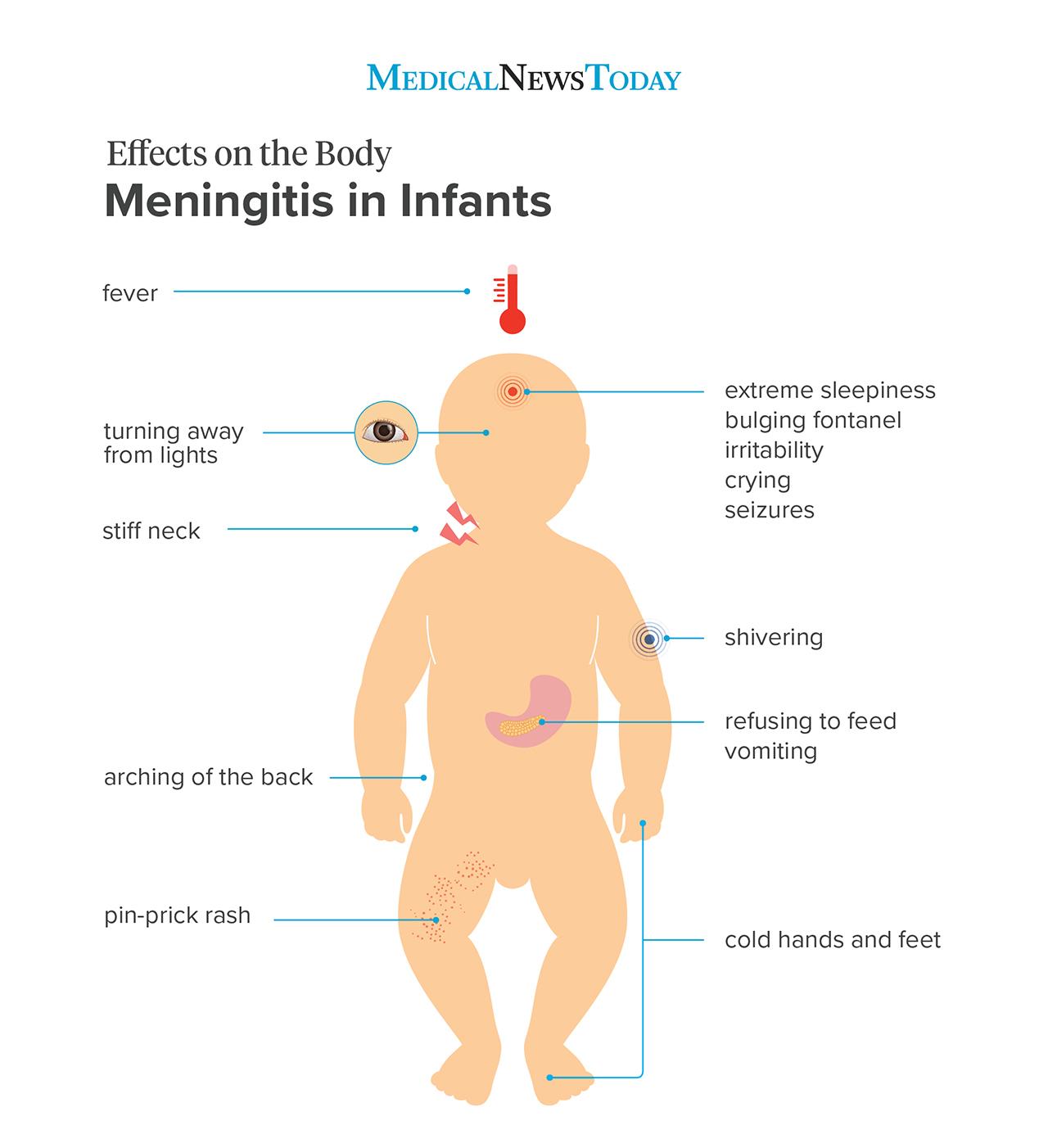 The most common causes of meningitis in babies are bacteria and viruses. Bacterial meningitis is typically more dangerous than viral meningitis, though both require prompt medical care.

Several different viruses can cause viral meningitis. They include:

Most of these viruses will not cause meningitis in a healthy person. However, babies are at a higher risk of meningitis and other complications, so protecting them from these illnesses is vital.

Bacterial meningitis can be caused by several different types of bacteria. The most common types that infect babies include:

Bacterial meningitis is treated with antibiotics that are typically given intravenously in the hospital through an IV.

According to the AAP, most babies who receive prompt antibiotic treatment will recover completely. However, about 20 percent may be left with lifelong effects, including hearing problems, learning disabilities, seizures, and paralysis.

Viral meningitis does not respond to antibiotics. It is usually not as serious as bacterial meningitis (except for HSV in newborns), and many babies will recover completely without complications.

However, both types of meningitis require prompt medical attention. Babies may need extra hydration with IV fluids, pain relief, monitoring, and rest in order to make a full recovery.

Meningitis can be spread easily from person to person. Although it cannot be prevented completely, some precautions can significantly reduce the risk of a baby getting it.

Babies should receive vaccines as outlined by the (CDC) or as recommended by a doctor.

Although vaccines do not prevent all cases of meningitis, they help protect against several types of serious bacterial and viral meningitis. This greatly reduces the risk of a baby getting the disease.

Before the Hib vaccine was available, this bacteria was the leading cause of bacterial meningitis. Today, infection with Hib has become much less common due to the vaccine.

Pneumococcus bacteria can cause meningitis and other serious infections, such as pneumonia. The pneumococcal vaccine is typically given at 2, 4, and 6 months of age, followed by a final dose between 12 and 15 months of age.

Children with certain health conditions may get an additional dose between 2 and 5 years of age.

The most common type of meningococcal vaccine is known as the meningococcal conjugate vaccine (MCV4 or ). This vaccine is usually not given to babies, but to children 11 years of age and older.

The MMR vaccine protects against measles, mumps, and rubella. Before this vaccine became available, mumps was a common cause of viral meningitis, especially in babies and children. Measles can also cause meningitis.

Newborns have not yet received all their vaccines, and their immune systems have not developed fully. Therefore, it is often advised to avoid people and places that may expose a baby to higher amounts of germs. Help protect babies from meningitis and other illnesses with these tips:

Also, do not expose babies to cigarette smoke, which may increase the risk of getting viral or bacterial illnesses, such as meningitis.

Meningitis symptoms can come on quickly and rapidly become serious in babies. For this reason, babies should be given emergency medical care if any symptoms of meningitis appear, or if the baby’s behavior is unusual.

Extreme fussiness without obvious cause, a fever, excessive sleepiness, or a rash should be checked by a doctor immediately.

Although meningitis can be serious, most babies will recover from viral or bacterial meningitis with proper medical care.