What are the signs that you might have asthma?

Asthma is a lung disease that causes inflammation and narrowing of the airways. Common symptoms include breathing difficulty, shortness of breath, wheezing, coughing, and tightness in the chest.

Symptoms can vary from person to person and range from mild to severe. People may only experience symptoms in certain situations, such as when exercising. In some cases, asthma can be life-threatening.

In this article, we discuss the symptoms of asthma in children, adults, and other groups, such as older people and pregnant women.

Adults with asthma typically develop the condition in childhood. Less commonly, a person may acquire it as an adult. In this case, doctors call it adult-onset asthma.

The main symptoms of asthma in adults include:

Over a person’s lifetime, asthma symptoms can result in permanent lung damage.

These symptoms often get worse when people have a cold, flu, or another respiratory virus. Certain asthma triggers — such as strong odors, dust mites, and smoke — can also exacerbate breathing problems.

Being aware of asthma symptoms is important. Prompt intervention can prevent an asthma attack or reduce its severity.

What is an asthma attack?

An asthma attack, or asthma exacerbation, occurs when asthma symptoms get worse for a short period.

People experience attacks when their airways become narrower than usual because of the presence of inflammation and mucus.

Asthma attacks vary in severity, but they may cause:

Early warning signs of an oncoming attack may include:

Medical intervention for severe attacks is necessary because the breathing difficulties they cause can become life-threatening.

Anyone who suspects they may be having a severe attack should see a doctor immediately. 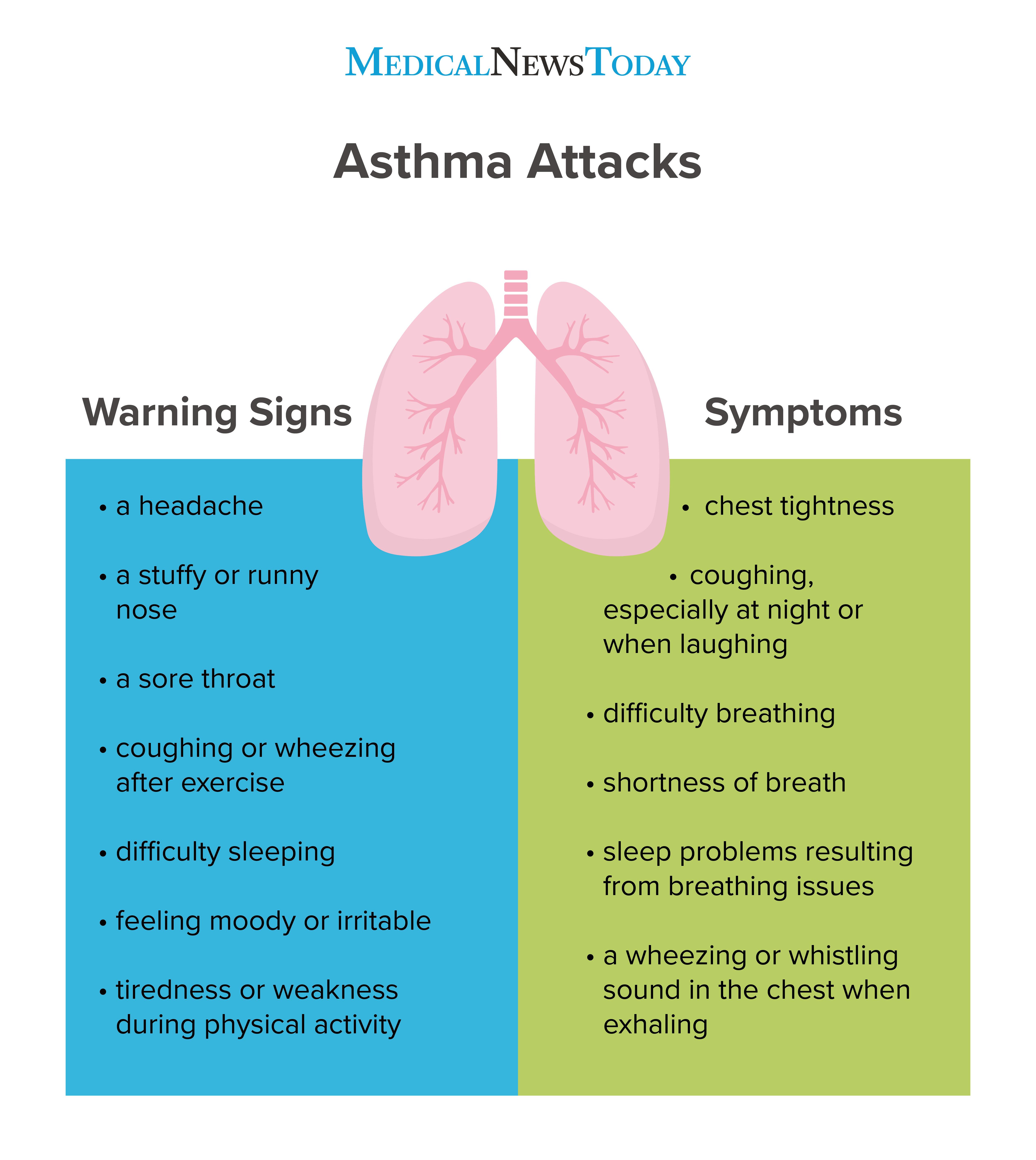 According to the Asthma and Allergy Foundation of America, asthma frequently affects people over the age of 65, and it is common for symptoms to first appear in a person’s 70s or 80s.

These symptoms are the same as those that occur in younger adults, but they may have more serious consequences without treatment. Even seemingly mild episodes of symptoms can lead to respiratory failure in older people.

Asthma symptoms in older adults may be more challenging to diagnose. This is because they are similar to the symptoms of other conditions that commonly affect this age group, such as:

Diagnosis may be further complicated by the fact that older adults tend to be less active than younger people. Doctors often diagnose asthma when symptoms occur in response to physical exertion, and there may be less opportunity to identify this effect in older people.

Older adults are also less likely to experience periods of remission, when symptoms disappear or reduce in severity.

Most people with asthma — approximately 95 percent, according to some research — first develop symptoms before they are 6 years old.

The Centers for Disease Control and Prevention (CDC) estimate that 1 in 12 children live with asthma.

Identifying symptoms in very young children can be difficult. While wheezing is a common symptom in children, not all children with asthma wheeze.

They may instead have a chronic cough or breathing problems that doctors and parents attribute to other common respiratory conditions.

The American College of Allergy, Asthma, and Immunology (AAAAI) recommend that parents look out for recurrent respiratory symptoms, as this can sometimes be the clearest sign that a child has asthma.

Symptoms may get worse in response to triggers such as dust, smoke, and pet dander.

Also, a lack of exercise can worsen asthma symptoms in children and adolescents, according to a systematic review from 2016.

Asthma is one of the most common diseases among pregnant women. Some experience an improvement or worsening of asthma symptoms during pregnancy, while others develop the symptoms for the first time.

During pregnancy, it is important to work with the doctor to recognize, manage, and treat asthma symptoms.

Without treatment, asthma may increase the risk of the following issues:

Coughing, shortness of breath, and wheezing are the most common asthma symptoms. However, they do not occur in everyone with the condition.

Some people have more unusual symptoms, including:

Certain situations, illnesses, or substances can trigger asthma symptoms in some people.

Known as exercise-induced bronchoconstriction, bronchospasm, or exercise-induced asthma, this condition can cause wheezing and breathing difficulties during or after periods of physical activity.

People with occupational asthma may only have symptoms while working with lung irritants, such as gases, chemicals, or dust.

The AAAAI estimate that, in the United States, 15.7 percent of current asthma cases in adults are work-related.

Common allergens may account for at least 30 percent of adult asthma cases.

Viral or bacterial infections, such as colds or sinusitis, can trigger asthma attacks. This can be especially problematic in children and older adults.

Also, people with asthma have a greater risk of flu-related complications, such as pneumonia, bronchiolitis, and bacterial infections.

The most common asthma symptoms include coughing, wheezing, and difficulty breathing. However, symptoms occur differently in different people, which can make diagnosis difficult.

People who believe that they, or their child, are displaying asthma symptoms should see a doctor for an evaluation. With treatment, people can manage their asthma and improve their quality of life.

Without treatment, severe asthma can be life-threatening, particularly among older adults and children. It can also represent a risk to the fetus during pregnancy.